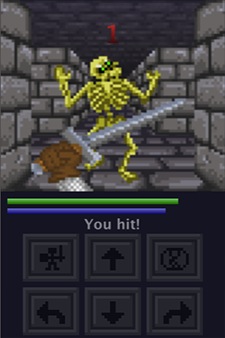 Old-school first-person dungeon crawler RPGs have seen something of a rebirth in recent years, like the critically acclaimed Legend of Grimrock which hit PC earlier this year (and is hopefully still coming to iOS) which brought the gameplay of classics like Dungeon Master and Eye of the Beholder to a new audience with modern trappings.

The App Store has been home to some winners as well, like Undercroft (Free), Descend RPG ($1.99), and the expansive adventure The Quest ($4.99).

Get ready to add another to the list, as developer Eric Kinkead is wrapping up work on his own take on the old-school RPG called QuestLord. It’ll feature what you’d typically expect from this kind of game, including plenty of quests, a ton of items and weapons, and turn-based combat. Check out the trailer.

What really struck me about QuestLord is how it looks so tailored to the iPhone. Sure, half a screen of UI isn’t the most attractive thing in the world, but I love games you can play with just one hand, and the window of gameplay above fits well with the old-school inspiration and the sweet pixel graphics.

If QuestLord looks like the kind of thing that will float your old-school RPG boat, look for it to hit later this summer.