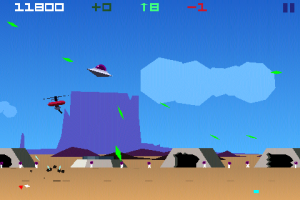 Lots of folks out there became new iOS gamers over the holidays, and one of my personal App Store favorites that may not be on their radars just got iCade support in an update. Madgarden‘s excellent Saucelifter! Heavy Disc [App Store] is a Choplifter clone that started life on the PC and landed on the iPhone in early 2009. Since then, it has seen numerous updates, getting iPad support as as universal app and receiving various gameplay tweaks here and there.

Gameplay involves piloting your flying saucer to various Earth-based prison barracks, blasting open the doors, picking up your captive crewmates, and dropping them off at the transporter where they’re beamed safely back to your alien world.  This is made challenging by evil Earth forces, including tanks, laser turrets, fighter jets, and flying attack drones.

There are a lot of nice touches to the title. The stylized, vector-based 2D graphics lend the game clean, future-retro visuals, with a day-into-night changing skyline that adds nice variation to the scene. A letter-box effect alters the aspect of the play area to provide early warning of incoming enemies. It’s extremely well done.

On the iCade, the leftmost six buttons control fire / autofire in the three relevant directions — left, down, and right. I greatly enjoy Saucelifter! via tilt-control, but I have to say that gameplay on the iCade more closely delivers the kind of fun I remember having in front of Gorlin’s helicopter classic, hour after hour, back in 1984. Other iOS controller accessories that feature iCade emulation, such as the iControlPad, should also work fine with Saucelifter.

Those not sold on Saucelifter! should at least have a look at the Lite version [link].