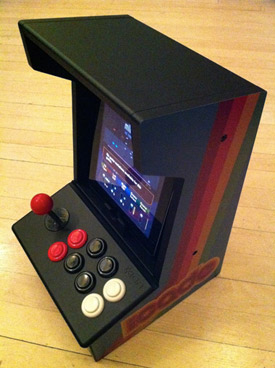 Last year, ThinkGeek may have outdone themselves on April Fools’ day by announcing the iCade, a miniature, upright arcade cabinet complete with joystick, buttons, and a coin slot. You just slip your iPad into it and — wham — it’s game time! It was well done joke, but it got a huge response from readers and that got the awesome folks at ThinkGeek thinking. And before long, we heard the epic news that the net’s best geek-toy vendor was teaming up with ION Audio to bring that little box of goodness to market — for real — and with Atari as a games partner. (Like they did with their 2007 8-bit Tie. Those guys are unstoppable.)

Yesterday, after leaping to pre-order and waiting a long and anxious month, the iCade was delivered unto my door. Readers that follow us on Twitter might have seen the informal and rapid unboxing and assembly photos I took along my hopeful journey to arcade bliss. So, now that I’ve spent some real time with the unit — was it worth the wait and the $99? 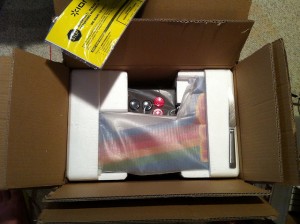 The iCade comes packaged unassembled. The box contains the main control unit, two side panels, a back panel, a handy flip-up top panel with instructions printed on the inside face, a lovely red joystick knob, screws, batteries, and a set of instructions. Getting the unit together with the help of the illustrated assembly sheet is about 5 to 10 minutes’ work. Once assembled, the first thing you’ll notice is that the iCade is heaver than you might have imagined. The unit’s panels appear to be vinyl-coated particle board, which accounts for much of the weight. The control unit is housed in a plastic shell and the sides of the cabinet are nicely illustrated. The assembled cabinet has a very solid feel with an impressive overall fit and finish. The weight of the unit combined with four rubber foot pads keep it from budging while the joystick and buttons are being manhandled.

Speaking of the joystick and buttons, I’m happy to report that it’s a quality situation going on at the control deck. The buttons — all eight of them — feel exactly like those that you’d find on an old Defender cabinet. The stick feels rugged and substantial, if somewhat less “stiff" than some you might find in an arcade. It has significant directional travel and issues a tactile “click" with each movement, sounding quite like the old Epyx 500XJ that some of you may have used in the past. I might have preferred if the actual control panel were also coated particle board to give a more textured feel, but the plastic shell surface does the job. 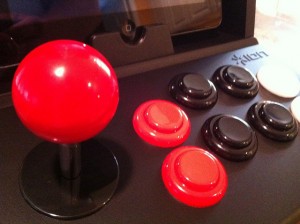 Yes, I mentioned batteries. The iCade’s control unit interfaces with the iPad wirelessly, via Bluetooth, and so power is required. Two AA batteries come with, and the light-up “coin slot" on the front of the cabinet flashes when the batteries are low. There is an AC adapter jack built into the unit that can be used with a power adapter sold by ION, if changing batteries sounds like a nuisance. (I’ve not had the unit in my hands long enough to speak of battery life, unfortunately.) There’s no power switch; after the initial Bluetooth pairing process, any stick movement will wake both the iCade and the iPad, and after a period of inactivity, the iCade’s control system will go into sleep mode awaiting the next tug. I wish the iCade did sport a power switch, though, as it presents itself to the iPad as a Bluetooth keyboard, and so when it’s awake and paired with the iPad, any attempt to do text entry on the unit in the vicinity of the iCade results in no onscreen keyboard. You need to disconnect the iCade in Settings to break free, which is a nuisance. 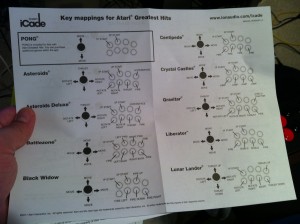 Ok, we’re six paragraphs in and no mention of the games — how does it play?! Glad you asked.

When ThinkGeek announced the iCade, they mentioned that Atari was partnering, to provide support for the device in “a huge suite" of classic games. When the excellent Atari’s Greatest Hits [App Store] landed, featuring up to 100 games, we assumed that this was the iCade’s magic bullet app — and we were right. Nearly every game in the collection supports the iCade’s controls, without even having to update the app. (Sentinel for the 2600, for example, does not, as it’s a “light gun" game with a virtual tap screen area.) A control legend sheet comes with the iCade that shows how the various arcade and 2600 titles in Atari’s collection map out on the unit’s eight buttons.

I found tearing through these classic games on the iCade to be everything I’d hoped it to be. On the whole, it’s just an awesome experience. Holding the stick in your hand, hearing the switches click open and shut, and mashing the fire buttons is absolutely the way these classic games were meant to be played. A proper stick in your hand beats a virtual D-pad every time.

But Atari’s Greatest Hits implements many other control systems as well. There’s the “roller" used in Tempest. The trackball found in Centipede and Missile Command. The “thrust rotation thing" used in Asteroids. For almost all of these games, I prefer the tactile experience that the iCade provides over the onscreen controls. The only exceptions might be certain virtual trackball-based games where the “momentum" of the virtual ball feels pretty right. Centipede and Millipede are good examples of this. Of course, you’re still mashing a virtual button which doesn’t compare to the real thing. (And yes, it is possible to lay the iPad down on the table and go “half and half" on the onscreen and iCade button controls — if you’re flexible.)

Some of the control configurations are pretty interesting. As can be seen in the video above, Black Widow is a dual stick game that utilizes the iCade’s joystick for movement and an inverted-T arrangement of buttons for aiming / firing. It sounds quite obscure, but works well.

The iCade has obviously been designed with a portrait orientation of the iPad in mind. And most of the games in the Atari collection are so oriented. To setup for these games you just flip up the cabinet lid and set the ipad down in a dock-like stand that has a hole in the bottom for a charging cable. A few of the Atari titles are landscape, however, and for these the iPad can be removed from the portrait area and placed in a groove that runs the width of the control deck, leaning it back against the angled front edge of the side panels. The landscape arrangement does look a bit precarious, but testing the balance of the iPad so fitted, I’ve no concerns of it tipping out. The whole thing just looks more tidy with the iPad in a portrait arrangement, which has the added bonus of significantly amplifying the volume of the fairly boxed-in iPad, thanks to audio reflection.

iOS devices with their multitouch displays, accelerometers, and gyroscopes have brought a wonderful array of fresh and innovative games to the world. But some games just want a joystick and proper buttons. The iCade delivers all that, and with an epic dose of retro arcade styling. And with an API on the way to allow other game developers to jump on board (Manomio has already confirmed upcoming support for C64), the goodness here is just going to grow.

As far as I’m concerned, the iCade (along with Atari’s Greatest Hits [App Store]) is an absolute must-have iPad accessory for the serious retro gamer.