Mobigame’s Edge [$2.99] is a game with a ridiculous amount of history behind it. There are several incredibly detailed accounts of everything went down, but in a nutshell, Edge was the first high profile game on the App Store to face serious legal troubles via trademark disputes. It flashed on and off the App Store at seemingly random intervals, often times with a sale, until EA won a court case against the previous-trademark holder Tim Langdell which resulted in a judge specifically referring to him as a trademark troll. Following that, Edge was back for good, and this new-found era free of frivolous legal threats has ushered in a fantastic pseudo-sequel: Edge Extended [99c].

If you’re unfamiliar with the original Edge, here’s a quick run-down. You navigate a rolling cube around maze-like levels built from blocks, collecting prisms and trying to reach the ending destination in the fastest time possible. The platform levels are dynamic, with moving floors and walls which sometimes transform into objects unexpectedly. It’s a unique experience, which we described in 2009 as being “inventive and an overall joy to play“. 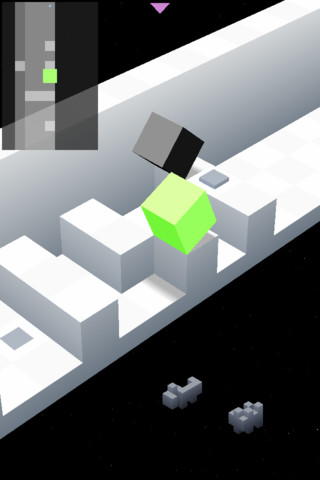 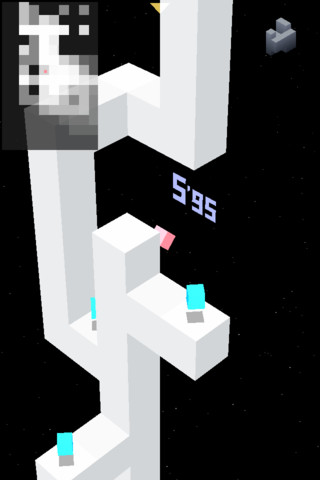 Edge Extended has not been released as ‘Edge 2’. Instead, it’s designed as an extension of the original Edge: keeping all the things which worked well, while adding some improvements.  Edge was already an incredibly fun game, so extending it further is like pouring some awesome on top of something that’s already awesome.

The first Edge appeared to feature a 3D world, but surprizingly, it was actually created using a sophisticated 2D engine. This introduced some limitations around things like camera effects and other things that require a true 3D engine. For Extended, they’ve implemented a whole new 3D graphics engine, which is optimized for retina displays and the iPad 2 (with some great anti-aliasing). The new graphics engine allows them to switch from a perspective view to an isometric view in real-time, which they call “the Vertigo effect," which is really cool when you first see it. 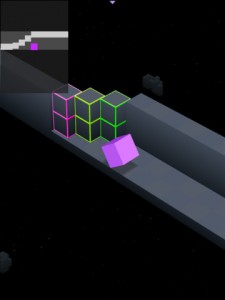 There’s 44 brand new levels in Extended. This includes 41 normal levels plus 3 additional bonus levels if you obtain all the prisms in the game. That’s only 4 levels less than the original Edge (48 levels), so this is a whole new release in terms of levels alone. Mobigame even engaged a new level designer for Extended (Jérémie Torton) who has brought in a ton of fresh level design ideas which I dare not spoil here. (Trust me, the game gets crazy later on.)

If you completed all 48 levels in Edge, you unlocked a faster paced ‘Turbo mode’, but that feature is not present in Extended.  Instead, they’ve implemented a ‘ghost-mode’. While you play, your device is actually recording your movements, and if you beat all 44 levels you can race against your own ghost, to try and better your earlier performance.

Another significant change is the introduction of a sinister new black cube, which speeds around the level, causing trouble. This new cube, named “Dark Cube" is introduced in one of the early levels, so you don’t need to wait long to encounter it. Dark Cube interacts with the level , such as triggering switches which make things change around you, forcing you to race.  The presence of another cube brings a whole new dimension to the game. Sometimes the Dark Cube is helpful, as he shows you how to pass certain obstacles, as a new way of delivering in-game tutorials.

Oh, there’s even a whopping 23 music tracks, including some from the original, which brings back happy memories and the new tracks sound as great as the original ones.

Extended is a universal game, so it can be installed on all of your iOS devices, but it also syncs your progress automatically across devices using Game Center. This allowed me to start playing Extended on my iPad, then pick up my iPod later and continue playing from the same point, as the levels automatically showed up as unlocked on both devices– I wish more games worked like this.

Edge Extended [99c] is currently cheaper than the original Edge [$2.99], making it the logical option to purchase if you haven’t got either. If you don’t have one of these games in your platform game collection, then delete something to make room for at least one of them, as Edge and Edge Extended are both brilliant platform games.