Stealth games are notoriously fickle things; genetically linked to arcade stock that treats players like quarter-pumping cattle, stealth’s central conceits have revolved around failure, punishment, and the gaming of its systems instead of things like fun and rewards. Spy Mouse mitigates a lot of the not-so-fabulous parts of its mechanics by being pretty up-front about its moment-to-moment stealth: it clearly shows you enemy pathways, its top-down perspective quickly gives you a handle on what you can do and when, and it’s mechanically simple, which eliminates the need to execute grand schemes or interact with complicated systems in second-long bursts. 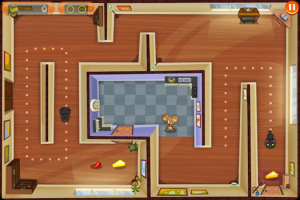 In a couple of words, it’s strikes me as a ‘balanced’ game. It isn’t super action heavy and as forgiving as the new Splinter Cell title, but it’s also not as stringent as an early Metal Gear or a Hitman. It’s challenging without being stupidly hard; its AI is predictable but capable; its level design allows for autonomy without sacrificing a vision; its boss battles are tough while simultaneously entertaining; and it gives you just enough information to succeed without overloading you.

It’s also pretty pure. This is a game about a mouse grabbing cheese underneath cats’ noses. The cats patrol on highlighted pathways, while you move around similarly to how you draw a plane’s path in Flight Control. It’s indirect movement, but it serves the game well and keeps pacing on an even keel, ensuring few stealth “Oh Crap, Get Behind The Wall Quick" messes. 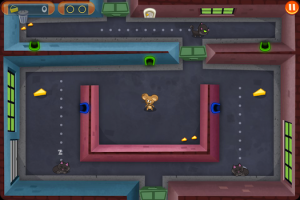 There are times in which I really, really want more direct control over my character, but those are few, and frankly, it’s because I’m approaching situations in stupid ways. Just like Flight Control, Spy Mouse is all about economy of movement and good planning; it’s not about dancing in front of cats and stumbling away in the nick of time, even though you can, if you want, do just that.

What strikes me as odd is that the core mechanic isn’t its biggest draw. I’ve been having more fun with the situational content that you apply movement to, as opposed to drawing raw joy from stalking behind corners. For the better, Firemint has loaded Spy Mouse with oodles of levels, all of which have something fun or strategy-light to offer. It even throws in a bunch of power-ups, side cheese, and hidden areas into the mix, brightening up and differentiating the overall offering, while still maintaining a cohesive feel.

And, sure, while Spy Mouse does a great job of tossing out a lot of stealth game garbage, trial and error are still very much a part of the package. The catch is that it does a fantastic job of putting you right back in to the action in a snap, Super Meat Boy-style.

Artistically and visually, I love what I’m seeing. I’m not the kind of dude who usually reflects on this stuff, but it’s hard to deny the appeal of the soft, Disney-like overall aesthetic. It oozes character without beating you over the head with it, and, you know, its colors and contrasts also look pretty sharp on ‘HD’ devices.

If you couldn’t tell, I’m pretty pleased with Firemint’s latest offering. It’s a neat change of pace from a talented development house, and more importantly, it’s a fun and good game. Give it a try, especially if you’re into stealth without a lot of the mess.