Word games are some of the earliest and most venerated titles on the App Store, and still developers continue to find ways to refine and revitalize the genre. The popularity of Words With Friends and the resurgence of updated standards like Wurdle demonstrate clearly that there’s life in the old girl yet. Genre mash-ups are another energizer; from PopCap’s Bookworm Adventures on PC to the upcoming Word Fighter on iOS, sprinkling in just a few new letters can make the difference between snore and adore.

In the case of Quarrel Deluxe [$4.99/Lite], the twist comes in the form of strategic gameplay. A fresh and fun take on the Scrabble formula, the game sports bright visuals, intuitive mechanics, and a crunchy outer layer of macro objectives that gives the sweet casual core longevity and depth. Think of it as an adorable war of the words.

At its most fundamental, Quarrel Deluxe is more or less a hybrid of Scrabble and Risk. The goal of each match is to claim all the territories on the map from your opponents. After you choose a faction to represent your soldiers (robots, aliens, ninjas, highlanders, etc.), the computer will divvy up the board’s zones between you and the AI players and randomize who gets the first move. 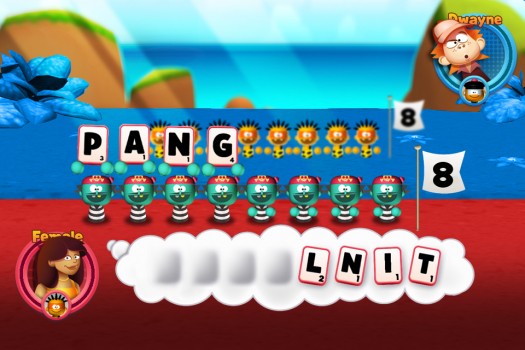 The first phase of each player’s turn is the attack phase. You can select a territory to attack from and then one of your enemy’s to invade. The number of troops you invade with then determines how the ensuing word battle plays out.

Both sides in a territory skirmish are given the same 8 letter tiles, which represent a mixed up anagram. Just like Scrabble, each letter tile has a point value attached to it, but since both sides have the same tiles, the maximum point limit (achieved by spelling the whole 8-letter anagram) is the same for both teams. This is where the strategery comes in to the wordsmithing.

You can put one tile into play for every soldier you have in the fight. If you only have four soldiers to work with, you won’t be able to play the whole anagram. Instead, you’ll have to find the most valuable combination of four tiles from the eight you’re given. If you’re outnumbered, then even the highest possible total for your soldiers can be defeated by the AI just by playing STARS when you play STAR. 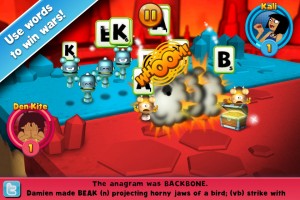 Thankfully, the game simulates human error and will occasionally flub one even when it has the advantage, which gives you incentive to play your best even when the odds are against you. You will regularly experience the thrill of a come from behind victory, which is one of the best feelings you can have in a word game.

Time can be a factor, so coming up with words quickly is ideal. If both you and your opponent achieve the same point total, then the player who submits their word first is declared the victor. The AI does seem to have a major advantage here, as I don’t think I’ve once submitted a winning word before my opponent had buzzed in. Some game modes offer unlimited time to think about your words, while others will put you on the spot and give you a countdown timer.

Minor quibbles about timing aside, the word battle mechanics are solid and extremely entertaining. However, it’s the metagame of deciding what territories to invade and when, along with how you distribute reinforcements when your attack phase is over, that makes the game truly stand out from the crowd for me.

Blitzkrieg a wide swath of the map, and your enemy can just sweep through your poorly defended annexations when their turn comes up. Turtle up in your territories for too long and you’ll quickly find yourself outnumbered; reinforcements are doled out on the basis of how many territories you control. While the maps are nowhere near as large and complex as the Risk board, there are plenty of opportunities to engage in wily play like capturing choke points that can be easily reinforced and defended. 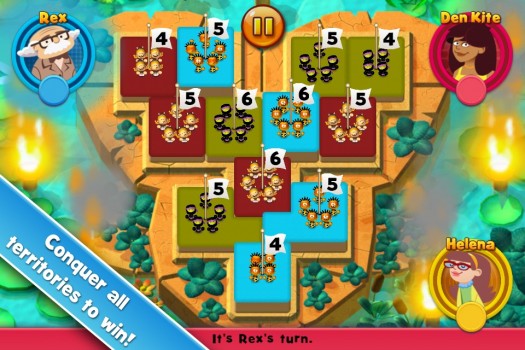 Before I continue, I think it’s pertinent to bring up something about myself. I am primarily a single-player gamer. I have railed long and frequently about the mistakes that developers make in awkwardly forcing multi-player gameplay into titles that just don’t need it when they could just focus on improving the single player experience instead.

With that disclaimer behind us, this game really would shine with a multiplayer component. The strategic and word mechanics make this title an ideal staging ground for PvP, and its absence is a gigantic missed opportunity for Quarrel Deluxe. It would have pushed the game into killer app territory.

Don’t get me wrong, the lack of multi-player does not take the shine off the overall package here. It is a smartly produced and full experience as it currently exists, and the value proposition is assuredly there. Pick up the lite version as a demo at the very least, and you’ll likely be swayed into a full purchase of the deluxe package as I was. Daily challenges keep the game fresh, Twitter integration lets you brag to your followers about how gr8 ur speeling iz, and the bright presentation makes Quarrel Deluxe a game with wide appeal that you’ll want to keep coming back to.