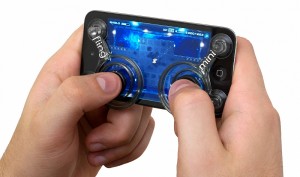 A couple of weeks ago, we learned that Ten One Design was getting ready to release a smaller version of their wonderful Fling controllers for the iPad which would be suitable for use on iPhone and iPod touch devices. There was a lot of negative backlash to this announcement though, and I can sort of see why. The promo image for the Fling Mini showed that using 2 of the controllers at the same time really blocked much of the screen of the device, and it was hard to imagine how it could be practical to play games this way.

Last week at WWDC, Eli and myself both got our hands on an early pair of the Fling Minis and put them to the test. Surprisingly, the screen blockage is almost a complete non-issue when you’re actually using the Fling Minis. The plastic that the Fling Mini is comprised of is translucent and doesn’t really block any more of the screen than your own thumbs normally would. But, that’s not to say that they don’t come with some quirks and they won’t work on every game that you’d hope. For the games that they do work with they work exceptionally well, and just like the Flings on iPad they offer a smooth and tactile control option over using a touch screen alone.

Eli has put together this fantastic comparison video showing off the difference between the original Fling, which you can read our original review of, and the new Fling Mini:

In my own experience, I’ve found several games that work near perfectly with the Fling Mini. Both Bug Heroes [Free] and Max Adventure [99¢/Lite] are two of my favorite dual-stick shooters that don’t come with many compromises when using the Fling, which you can see in this second hands-on video. There will be times when accessing a UI element or menu option will be difficult because the Fling Mini is blocking that part of the screen, but it’s easy enough to detach a suction cup and swivel the controller out of the way to gain access to these. It would be cool if there were tiny hinges in the connector arms of the Fling Mini so you could quickly flip them up to access the entire screen. Perhaps in a Fling Mini version 2.0.

The Fling Mini is also well-suited to some games that use just a single analog stick or a d-pad for movement, and one interesting thing is how well it works with the Joypad Game Controller [Free] which we also covered at WWDC this year. Especially with the Joypad SDK now offering the ability to use analog sticks, one or two Fling Minis combined with an iPhone or iPod touch and the Joypad app could make for a really nice controller for playing an iPad or desktop game.

One example of a game that did not work so well is Age of Zombies [$2.99/Lite]. I had high hopes for this one as it employs a touch anywhere scheme for its set of dual-stick controls, which would mean precise placement of the Fling wouldn’t be necessary. Unfortunately there is no way to access the grenade button while using the Fling with this game, which is a pretty big problem. You can avoid this by using only one Fling on the left control stick, but this gives the game an inconsistent feel. Also, games that utilize buttons in the lower corners of the screen, like many first person shooters, are also basically unplayable due to the plastic spirals of the Fling Mini blocking those areas of the screen.

The thing I like most about the Flings is that they just “feel” good. The movement is solid and smooth, and for the games that they work well with they are definitely an enhancement. On the larger screen of the iPad, the original Fling works with a greater number of games and there are much fewer instances of inaccessible UI elements. These problems are amplified with the Fling Mini and the smaller iOS screens, but it isn’t a total deal breaker and for the select games that they do work well with they feel absolutely brilliant. 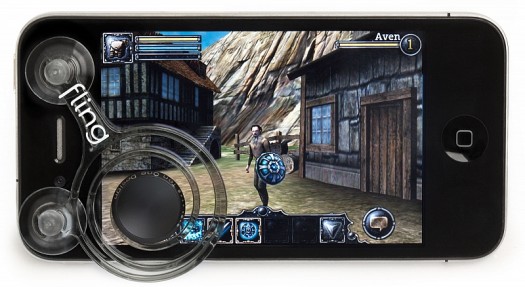 One of the first things I asked Ten One Design about the Fling Mini was whether they would also work on an iPad, thus negating needing two different styles of Flings. While there’s technically nothing preventing them from working on an iPad, almost all iPad virtual analog sticks require a larger range of motion than what is afforded by the smaller Fling Mini. You may be able to come up with a few games that work well on the iPad with a Fling Mini, but for the most part you are better off using the original Fling with that device.

Really the best thing to do is find a friend who owns a pair or head to an Apple store and try out the Fling for yourself. If you like the way they feel and can deal with limited game compatibility, then they are a great purchase. Hopefully more developers will incorporate special settings for using a Fling controller in their game, especially with them now being available on iPhones and iPod touches.

You can currently pre-order the Fling Mini in a 2-pack for $24.95, and they should be shipping sometime in mid-to-late July. The original Fling for iPad is available now in 3 colors at a price of $19.95 for a single controller or in a 2-pack for $29.95.