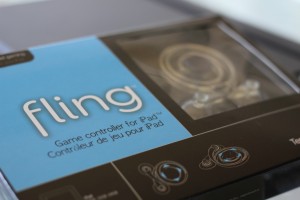 The iOS platform is home to some great input methods. Developers have utilized multitouch, tilt, and, in some cases, even the gyroscope and microphone for some incredibly creative games that would only be possible on iOS devices. But what about more traditional games that can’t be controlled this way? As many of you know, that’s where the highly debated virtual joysticks and buttons come into play. The problem with these virtual controls is that for as great as multitouch input is, no iOS device can offer any kind of tactile feedback for virtual controls.

Depending on how adept you are with working with them and how cleverly developers design them, the effect of virtual controls ranges from being largely game-breaking to not that big of a deal. Still, over the lifespan of the App Store, it’s not hard to think of several games that would be much better using a real controller regardless of how good (or bad) the virtual controls may be. This is a problem that Ten One Design hopes to solve with the Fling Game Controller for iPad. 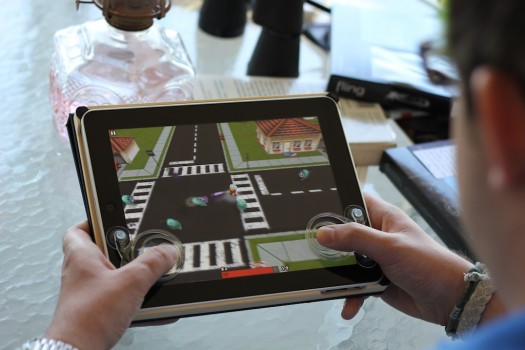 The Fling is a cleverly designed device with two suction cups on one side connected to a plastic ring. Inside of the plastic ring is a spiral that suspends an electrically conductive joystick in the center. This spiral works like a spring, always returning the joystick to the center, and providing more resistance the closer you get to the edge of the plastic ring. It’s made out of clear plastic with a Fling logo that comes in three different colors: black, blue, and purple. 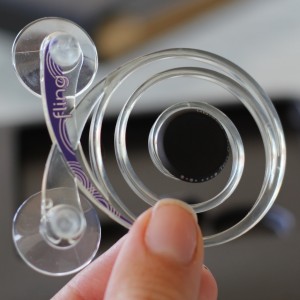 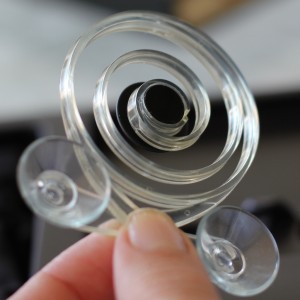 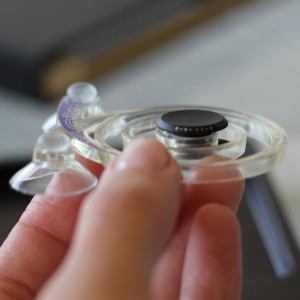 NOTE: The preview units are from the initial prototype run, the final units will be made of completely clear plastic, not the slightly yellowish material these are made of.

Using the Fling is as simple as loading a game that you want to play that uses some kind of virtual control, and sticking it on the device with the attached suction cups. If you’re playing a game with floating virtual joysticks like most dual stick shooters, all you’ve got to do is position it wherever is most comfortable to you, press down both suction cups, and you’re ready to roll. Games with controls that are static take a little bit more fiddling around. Sometimes you need to get creative with which direction you’re going to have the Fling facing in order to hit the center of the touch point while still having ample room for the suction cups to stick. 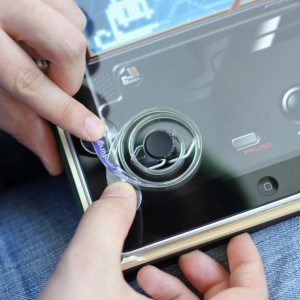 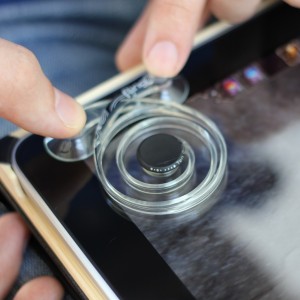 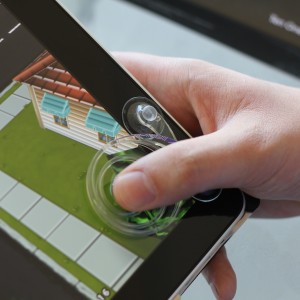 The build quality of the device seems sturdy enough to do the job, but the way the internal spiral is constructed makes me a little nervous to just haphazardly pocket it or throw it in my laptop bag. I’m reluctant to really do any durability tests since these are preview units, but according to Ten One Designs, the Fling is made of a type of resin which very difficult to break and they’ve subjected it to “major torture" without issue. Still, there is no escaping the fact that the Fling feels like a piece of plastic, which doesn’t exactly inspire confidence when considering the price at which they are selling them.

Ten One Designs is currently taking preorders of the Fling for $25 each, or $38 for a pair, which seems expensive for a piece of plastic. The price, however, is probably in line with what most iPad accessories cost. Either way, Ten One Designs is expecting the Fling to begin shipping towards the end of this month. 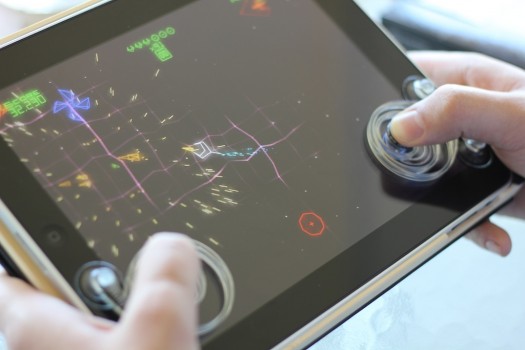 The good news is, for many games, the Fling is absolutely outstanding. Playing dual stick shooters using the Fling is, in a word, glorious. I easily decimated my Geometry Wars [99¢] high scores. With real joysticks, Max Adventure [99¢] is a joy to play. Age of Zombies [$2.99] feels like it was made to be played with the Fling, with the secondary weapon buttons positioned perfectly outside its plastic ring.

First person shooters work great as well. In fact, I almost felt like I was cheating in N.O.V.A. 2 HD [$6.99] my overall accuracy improved so much. It’s really incredible just how much of a difference it makes, almost making N.O.V.A. 2 feel like an XBOX game with a real controller. Similarly, the Fling works really well in every Gameloft game I tried, as the ability to move the various on-screen controls around allows you to perfectly position the Fling wherever you’re comfortable, while also placing the buttons within reach. 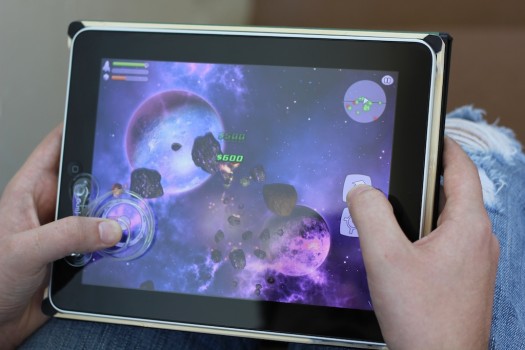 Games that use a single virtual joystick also work awesomely, as expected. LEGO Harry Potter [$4.99] and our own game of the year’s iPad counterpart Space Miner HD [$4.99] are both great with a real joystick.

As far as what doesn’t work so well: any game that relies on swiping instead of a virtual stick with both a center point and a maximum that are inside of the Fling’s range of motion. Aralon: Sword and Shadow [$9.99] was on my short list of games I really wanted to try with the Fling, and while the movement joystick works fantastic, camera controls don’t. Positioning a second Fling on the left side of the screen only moves the camera as much as moving your finger around would, so you hit the limit of where the Fling can move, and that’s as far as the camera goes. 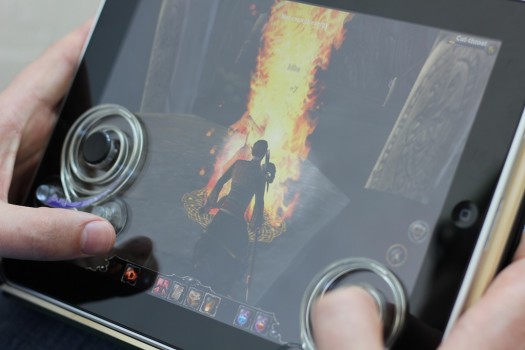 Games that you can’t move interface elements around that have buttons close to the virtual joysticks also don’t work. I was really excited to try Lara Croft and the Guardian of Light HD [$9.99] following our not so positive first impressions but by default, buttons are positioned under the Fling’s spiral, making them impossible to press. It seems like you might be able to move them around in the game’s settings, but it crashed 100% of the time when I tried.

I suppose now it comes down to the inevitable question of do I recommend preordering the Fling? Well, it all comes down to what you do with your iPad. If you’re the kind of person who loves dual stick shooters and FPS games, and do the majority of your gaming at home or somewhere that needing to fiddle around with accessories is not out of the question– and if you can swallow the $38 –I say go for it. However, if you primarily use your iPad as a ultra portable tablet that you also game on, I’m not so sure I’d want to cart my Fling(s) around wherever I go. 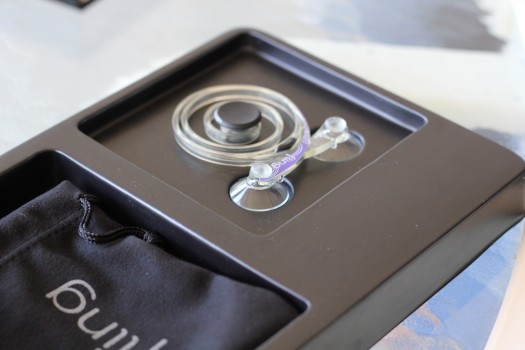 The beautiful thing about both the iPhone and iPad is you don’t generally need to haul around extra junk. They do so much as is that all you might ever need is a pair of headphones for most outings. Also, it really comes down to how much of an issue virtual controls are for you. If the inherent lack of precision generally found in virtual controls doesn’t really bother you, then you likely won’t see much of a benefit from using the Fling. Also, don’t bother buying a Fling if you don’t have an iPad: it’s too wide to attach well to the iPhone and obscures over half the screen.

Personally, all too often I find myself saying, “This is good, but it would be so much better with real controls." A Fling still isn’t a substitute for a real analog controller, but it sure is a step in the right direction… Assuming you can put up with yet another accessory, of course.