Earlier the other week, we brought you news that Activision was kicking off a new stat-tracking service for Call of Duty called “Call of Duty: Elite.” In addition to giving fans a web portal, the mega publisher plans to release native applications for the iPad and iPod Touch that do much the same thing. Bungie has since fired first so-to-speak by offering a stat-tracking application of its own for Halo: Reach (and possibly more games to come).

You can download “Bungie Mobile” [Free] for free. And while it gives you all that you need to know about your K/D ratio, it also lets you view your Spartan’s armor, the challenges of the week, the commendations that you’ve earned, and last but not least, connect with the rich Halo community still residing at Bungie.Net, the one-stop-web portal for all things Halo including stats. 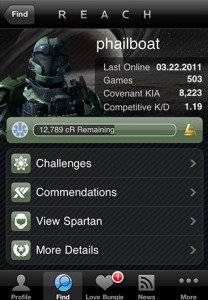 The latter is an important point: part of the reason why this was released was to give fans free stuff. As of now, you can unlock a Bungie Nameplate and special Blue Flames over the app for Halo: Reach. Bungie is giving users without an app a shot at other fun stuff, including never-released artwork and commemorative t-shirts.

You can learn more about that via Bungie’s Web site.

If you’re wondering what the hubbub is all about, know this: 343 Industries is now the studio behind the IP. Its first title will be Halo 4,  a new chapter in a three-part continuation of the original Halo series.

Official applications like this are more rare than you’d think. Publishers and studios don’t blow a portion their 25 million dollar-and-up budgets on small social-focused apps that connect to console experiences, despite the power of the “always thinking about the game” mentality that their on-the-go nature inspires. It’s nice to see a high-profile studio like Bungie give it a shot in earnest.

If you’d like to don a tin-foil hat with me for a second, I think this also means that Bungie won’t be afraid to pump out a similar support application for its forthcoming MMO.

Speaking of crystal balls, Bungie revealed in a post earlier today explaining the sudden appearance of Bungie Mobile that it will “tell you, in explicit detail, exactly what Bungie Aerospace is all about.” I’ve been thinking that it has a connection to said MMO. I’m not sure that’s the case now. We’ll see soon enough — July 7 is the cut-off date.