Back in February, my jet-setting TouchArcade cohort Eli Hodapp found himself wanting to play some video games on his laptop while on the road. Not one to carry around a bulky Bluetooth controller just for that specific purpose, he came across a novel little app called Joypad [Free] which was a suitable alternative. Basically, the Joypad app runs on your iPhone or iPod touch and turns the device into a wireless controller for your computer with a highly configurable set of virtual buttons.

The Joypad app syncs up with a desktop client which allows it to be used to play any game by remapping the keyboard controls to the virtual buttons on the device. It works really well, is fairly easy to setup and get running, and is a great companion for the traveling gamer, as we noted in our review of the Joypad.

So since that time, the two man operation Zell Interactive who are responsible for the Joypad have been quite busy. First of all, the formerly limited free version of the Joypad has been updated to include all the same functionality of the paid version. Basically, this means you can download the Joypad and the desktop client and have your very own virtual controller on your iOS device at no cost at all. As the developers do enjoy putting food on their tables, the way they will monetize the Joypad from here on out is by offering additional skins as in-app purchases. 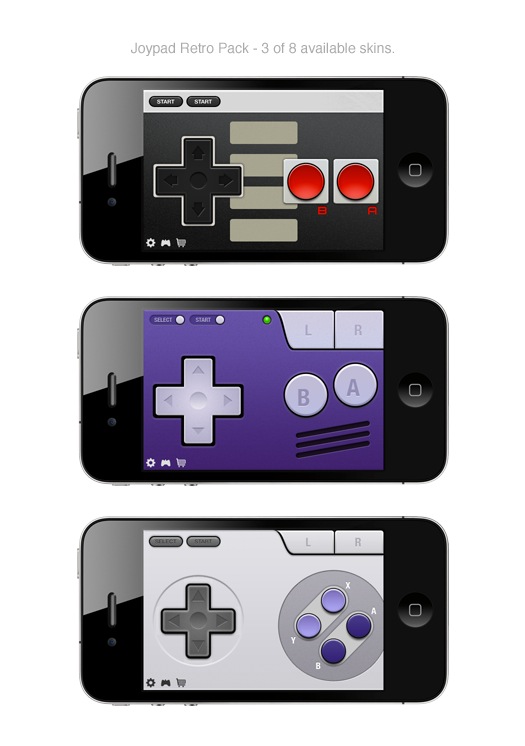 The first set of skins will be a retro pack that will offer skins from the NES, Game Boy, Genesis, and many other classic consoles. The skins are purely visual and don’t alter the functionality of the app, but if you use the Joypad for playing classic console emulators then the appropriate skin can add a bit of fun to the experience. The skins will be available individually for 99¢ each or together as a complete pack at a discounted price. The original paid version of Joypad has been renamed Joypad Elite [$11.99], and will always receive all the new content as free updates rather than IAP. If you don’t already have Joypad then the free version is the way to go, but this way they can still say thank you to their previous customers who supported them by buying the app initially.

While the skins are a neat feature, the really big news about the Joypad is that the developers have recently released a free SDK that will allow other developers to easily integrate native Joypad support into their desktop or iOS games. On your computer, this means that if a developer integrates the SDK into their game you’ll be able to play that game using the Joypad without the need of syncing with the Joypad Connect desktop client.

It all works incredibly simply. Just fire up a game with Joypad support on your computer or iOS device and then fire up Joypad on an iPhone or iPod touch. The game will automatically detect the Joypad running and send the appropriate controller configuration to the device. There can be a mixture of various types of buttons, d-pads, or analog sticks on the Joypad that suit each individual game. Shortly down the road, the ability to add custom controller skins for a particular game will be added into the SDK for an even more cohesive experience.

The Joypad developers have added in Joypad support to an open source version of Wolfenstein 3D [$1.99/Lite] just to demonstrate how easily it works:

Another recent addition to the Joypad app is mouse movement and clicking support when playing games on a computer. This means you can control the cursor in a game that normally needs a mouse just using the accelerometer of your iOS device. They demonstrated this feature to me by playing Minecraft using just an iPhone and the Joypad app, and I was pretty blown away with how well it works:

The Joypad app comes with pre-configured settings for both Minecraft and Portal 2, but the controls can be configured pretty much however you want to make them work with a ton of desktop games. They’ve also added support for connecting via Bluetooth in addition to a local WiFi connection, which takes care of some of the connection issues that were present when trying to use the Joypad on a crowded WiFi network.

There have been a few games that utilize playing on the iPad using an iPhone or iPod touch, and EA Mobile is dabbling in this area as well, but the release of the Joypad SDK means that there is the potential for any game to use this functionality, and it can be an attractive extra feature to add to any iOS or desktop game. Couple Joypad support with the display mirroring capabilities of the iPad 2, and suddenly your mobile devices have taken on the traits of a home console. While the Joypad isn’t a total substitute for a physical controller, it still works really well and is a lot of fun to use. Hopefully developers will check out the free Joypad SDK and we will see support for it in many more games in the future.