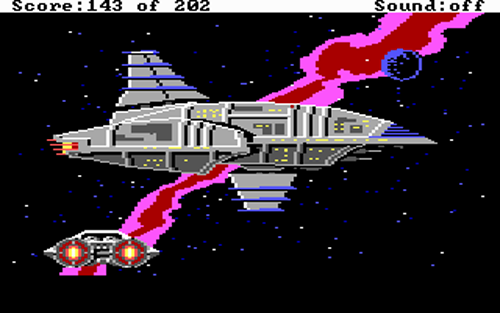 It was back in October that we began following the saga of Sarien.net, a retro Sierra adventure game portal setup by developer Martin Kool. In April 2009 his website began offering entirely web-based remakes of classic Sierra adventures, built entirely with HTML, CSS, and Javascript (though the project really began back in 2001 with a Sierra-inspired graphical chat client). Last year, Kool began creating versions of these web-based games with an interface and graphical treatment appropriate for the iPad and mobile Safari. The first iPad release to go online was Space Quest, which we previewed in November, followed by King’s Quest and Leisure Suit Larry, earlier this month. These games were basically reverse engineered, ground-up remakes and were not licensed by Sierra. And, as such, last week’s news of Sarien.net receiving a cease & desist letter from Sierra and closing its doors was sad, but not highly surprising.

It seems the Sarien.net story is not over, however. Kool has just revealed in a lengthy blog post that includes a fully history of the project that, in an unexpected turn of events, Activision has contacted him with a proposal offering limited official authorization to publish a subset of his remakes online.

Activision proposed to officially authorize Sarien.net to publish the first game of any series in its multiplayer HTML5 form. As it may generate interest in also playing the games’ successors, Sarien.net will provide a link to Steam and other services that offer the full game collections. To me that sounds beyond “fair enough", and very reasonable. Also, as Activision may (or may not) choose to provide official releases of these games through the AppStore, they requested that all iPad versions of the games be removed.

Now even though it is based upon the same HTML5 technology I also find this request understandable, as I would probably have done the same if I were Activision. Then again, if I co-owned Activision instead of Q42, there might’ve been a World of Space Quest and worldwide free beers on Fridays, but right now this really is a huge step forward and allows games like Space Quest, Police Quest and King’s Quest to be played by many people during work hours – err, I mean, in a browser.

And, so it seems that that Sarien.net and some of its web-based Sierra adventures will live on, though iPad gamers will not be enjoying the excellent custom treatment that they may be accustomed to — unless Sierra launches their own iOS versions of said classics. (Incidentally, the jury is still out on what will ultimately become of Leisure Suit Larry, as it seems Activision sold it to CodeMasters at some point in the past.)

Kool indicates that his first order of business is to restore Sarien.net to what it was (but with the approved list of games), with a redesign and additional functionality to follow. While it’s less than we’d hope for as far as iPad adventurers are concerned, this is certainly good news for the gaming community in general. And we offer a “hats off" to Activision for their consideration to Sarien.net regarding these classics.