Last month we posted about Sarien.net, Martin Kool’s home built tribute to a wide array of classic Sierra Adventure games ranging from Space Quest to Leisure Suit Larry. Currently, all of these games are completely playable via any modern web browser just by navigating around the site. Since we last spoke with him, Martin has been hard at work customizing and tweaking Space Quest to run on the iPad. We were given a hands-on preview of the game, and it didn’t take long to come to the strange realization that they really feel like how the games were meant to be played… nearly 25 years later, on a device that the original developers likely couldn’t even imagine. 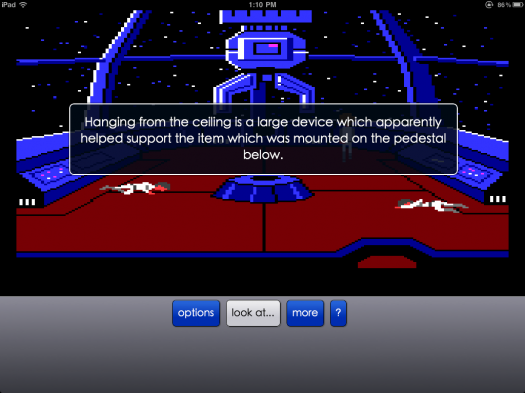 Playing the game on the iPad is effortless. Installing it is as simple as navigating to a (secret) URL, at which point the game tells you to go through the sequence to add the URL as a home screen icon. From there, you tap the home screen icon and the game loads completely seamlessly without any additional work. It’s crazy just how fast and easy the whole process is. The first time you load it up, there’s a small load time, but as soon as mobile Safari starts caching parts of the game it’s just like playing the actual computer game. There’s even multiple save slots, and accessing them is as simple as rotating the iPad in to portrait mode.

The version of the game we were given access to seems complete, and playing it is simple. You tap in the game world to move there, and text commands are entered via a menu tree of sorts represented by buttons on the bottom of the screen. Instead of typing, every command is only a few taps away. It works really well, and I suspect will make the games much more approachable to people who haven’t experienced them before as the available commands usually at least nudge you in the right direction by hinting at what you’re capable of doing. 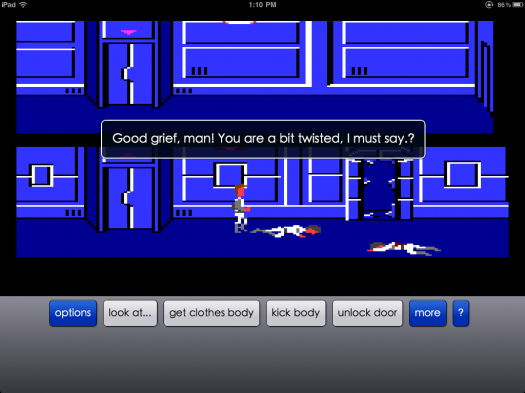 What makes this all that much more impressive is the technical wizardry taking place behind the scenes making this all possible. Space Quest is built entirely with HTML, CSS, and Javascript and once they’ve been cached on the iPad you can play them in their entirety offline. Also, to preserve the classic retro blocky graphics, Kool had to jump through quite a few hoops since modern browsers love to scale things with bicubic filters. This makes photos and other images look good, but turn these ancient pixels in to a blocky mess. Due to this, each of the games on Sarien.net will need to be hand-tweaked to run on the iPad. Space Quest should be finished within a week if everything goes according to plan, and after that Martin has his sights set on The Black Cauldron, King’s Quest and Leisure Suit Larry.

As huge fans of retro adventure gaming, we’re following this very closely. As soon as Space Quest is ready to be made public, we’ll let you guys know.