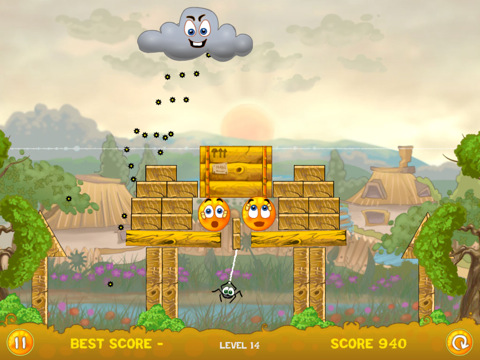 So there’s these oranges… They’re just hanging out amidst wooden blocks and platforms of various sizes, against the backdrop of numerous lovely pastoral landscapes. It’s about all an orange could ask for, really. Well, it would be about all an orange could ask for, were it not for this pesky and dangerous cloud that keeps blowing about, precipitating deadly poisonous rain and spelling gruesome death for said oranges. Poor, poor oranges!

Such is the dilemma in FDG Entertainment’s iOS physics puzzler Cover Orange [App Store]. But, fret not — there is something you can do… 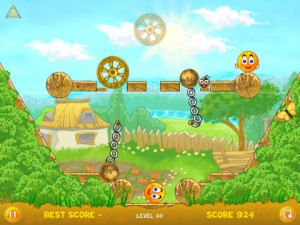 Cover Orange presents you with level after platform-filled level of cute little vulnerable oranges, and it’s your mission to protect them — to cover them, if you will — from the aforementioned cloud’s deadly rain. This is done by strategically dragging and dropping the various objects at your disposal (each level presents you with a different mix) onto the platforms where the oranges are resting. This might mean filling a gap between two platforms with a crate to provide cover, or nudging an orange towards the safety of an overhang with a wagon wheel, or dropping in barrels and a crate to build a makeshift house, of sorts, for a helpless orange.

As you progress through the levels, the platform arrangements grow more elaborate. You may need to drop a barrel onto one end of a lever platform to catapult an orange across the screen, or nudge a hinged hammer into motion to get things flying about the level properly. Whatever the case, the end goal is to keep the bouncing droplets (more like pellets, really) of rain from contacting any orange on the screen when the cloud comes passing by. 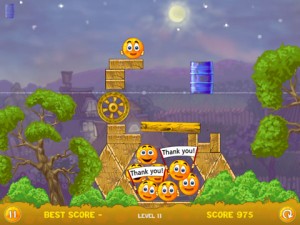 A realistic physics system acts upon every object onscreen, including each raindrop, which brings with it a bit of collision chaos that inserts a bit of chance as to whether your particular arrangement of objects will get the job done. In short, there is no single, right solution in many cases, and it feels like luck plays a role, as well.

My only real gripe with the game is to do with the scaling of difficulty as the levels advance. The difficulty does increase with the level number, in general, but there are several instances where you may still be patting yourself on the back for completing so complex a level arrangement, when faced with a follow-up level that’s quite basic and easy to complete. Additionally, I have heard comments from one or two gamers who dislike the feeling of luck being a part of things, that I described earlier. It’s hard to articulate, but there’s definitely a feeling that, where you thought you placed your objects well and still failed, another round of the same arrangement might yield success. It’s to do with the chaos introduced by the physics system. It may leave a sour taste in your mouth, but it bothers me not at all (because, while it sometimes hurts, it sometimes helps).

In the time I’ve spent with Cover Orange so far, I’ve definitely felt that “ok, just one more level" draw that a clever puzzler will inspire, making it tough to walk away from. And, while I’ve not run through all 120 levels (and 20 more are on the way at the time of this writing), I expect I will soon enough.

I know it’s not the same sort of game, but if you like Angry Birds and its ilk, I think Cover Orange will be worth your while — there’s just a spiritual similarity of sorts going on there. At any rate, at least give the Flash version a whirl or check out the lite version of Cover Orange HD [link].