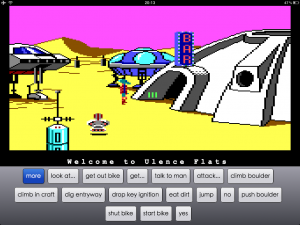 Martin Kool describes himself as “‘just some guy’ with a family at home with 3 kids to take care of (and one coming up) and a day job" who also happens to have an insatiable love for old school Sierra adventure games. That day job he mentions involves doing “kick ass things with the web," as he put it, so it’s not much of a surprise that when looking for tools to bring these old games to modern platforms he settled on completely cross-platform HTML, CSS, and Javascript. Currently, nine of these classic adventure games including the Kings Quest series, a Leisure Suit Larry game, and others are playable on his web site Sarien.net.

This all would be cool enough by itself, but Martin is hard at work on the final touches of adapting his web game engine that all these games run in to be (as he put it) “a real kick-ass iPad experience". When finished, these games will have their own special URL’s users will be able to navigate to, then save as icons via the add to home screen functionality that already exists on the device without any jailbreaking, emulation, or anything else. These games will be entirely touch friendly, and require no typing. Check out the video he put together:

When Kool approached us about this, I definitely thought this was something that needed to be on TouchArcade, but had to ask the inevitable question of whether or not he was ready for the attention he will get. (Specifically, from Activision’s legal department.) To him, this is a labor of love. He’s running these games at his own cost, without ads. So far he’s had over 2 million players stop by his site. He said he’d stop immediately if Activision sends him a cease and desist– but more than anything he just hopes that Activision either grants him a noncommercial license or somehow involves him in republishing these games in HD like he has.

Sarien.net is an outstanding tribute to these old school adventure games, and if all goes as planned, the site will have iPad friendly versions of the included titles within a month. It’s no secret we love retro gaming around here, and we’ll post more information on this project as soon as we get it.