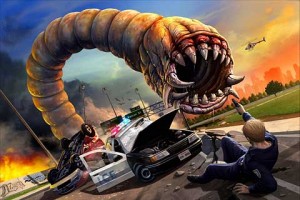 When Super Mega Worm [$1.99 / Lite] was first announced, it was hard to not get excited after watching the initial trailer. Based on Death Worm and heavily inspired by the flash game Effing Worms, Super Mega Worm showed a lot of promise. A day later, PlayCreek, creators of StoneLoops! of Jurassica revealed that they were bringing an officially licensed remake to the App Store. With that, the worm wars began. We liked Super Mega Worm quite a bit in our review, but really wanted to wait for Death Worm’s release to crown the true king of worm destruction.

If that’s what you’ve been waiting for, you’re in luck. PlayCreek just contacted us this morning to tell us that Death Worm has been submitted to the App Store, and barring any approval SNAFU’s should be available very soon. Out of the box, Death Worm is going to support fast app switching, the Retina Display, and Game Center. In addition, it boasts an impressive feature list including 45 different levels taking place in 3 locations with varied objectives, 30 enemy types, 3 types of worms, a mini-game (with more coming later via updates), and worm customization.

Check out the trailer:

The pixel art in Super Mega Worm was cool, but I’m really digging the art style of Death Worm and how it has a more realistic (well, as realistic as a worm game can get) feel to it. With any luck, Death Worm will see a lightning fast turnaround time at Apple’s approval department and we’ll be evolving our worms in no time. We’ll take a closer look at the game as soon as it is released.