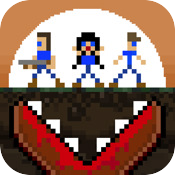 Just a couple of days ago we revealed DeceasedPixel’s latest project, Super Mega Worm [$2.99], a game based on the original Death Worm concept by JTR, later made famous by the popular Flash game, Effing Worms. Super Mega Worm is a pixel-art take on the giant worm theme, and is now available.

Super Mega Worm opens with an 8-bit retro cutscene explaining how humans have consumed the earth, and how mother nature now has a bone to pick with us. She tasks her favorite pest exterminator, Wojira the Death Worm, with wiping humans from the earth and restoring balance to the force…you get the idea. It’s a nice little setup for the mayhem that is the hallmark of the giant worm game, and an introduction to the glorious mario-like pixel art 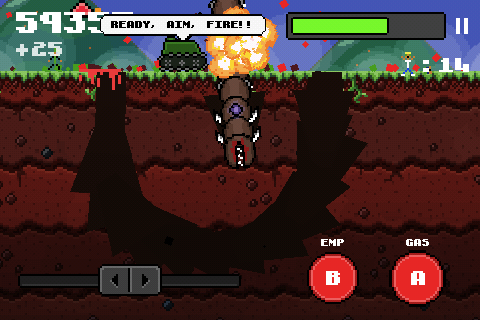 In our preview we were ultimately left wondering as to whether Super Mega Worm included the levelling system that propelled Effing Worms to stardom, and we’re pleased to find that it has in fact done so. In Super Mega Worm you start as a tiny wormlet, tasked with destroying a number of humans (indicated at the top right of the screen) by burrowing through the ground and erupting from under them (or over them, if you get enough height). To begin with, you can’t really jump that high, but as you keep reaching your targets you level up and eventually can propel yourself higher and higher. 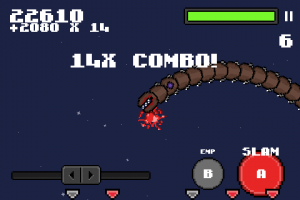 Wojira is controlled by either a slider or tilting option, but we found the slider option worked best. Additional buttons appear on your screen as you unlock your spitting attack, EMPs, fireballs, slam attacks and other abilities as you work your way through the worm’s 24 levels. One problem we had with Super Mega Worm was that the pacing between levels felt a little off. To start with, you don’t actually unlock your first ability until well into the game, and by that stage tedium has settled in as you essentially are attacking the same way over and over. When you finally unlock spit, you have another toy to play with, but this pacing trend persists between each new skill unlock. The game feels as though it has as many peaks and troughs as the path of your worm.

What does help this is the myriad of different food sources you encounter. From talking cows and horses, to elephants, birds, balloonists, moms with strollers (and flying babies), army men, police cars, tanks and airplanes to name a few. You can even reach orbit by propelling yourself from vehicles and chew through the earth’s many satellites and UFOs hovering about. Many of these fight back too of course, with RPG-toting army men dropping mines and shooting rockets that are best avoided.

Though it is a lot of fun chewing through everything with a giant worm, we can’t help but feel there’s more that could be done with the game, particularly to address pacing issues and make it more gratifying early on. There are also no online high scores or achievements in Super Mega Worm; something we thought would have been staple in a game like this, considering its flash origins and focus on scores and multipliers. With the official Death Worm game by Playcreek on the horizon too– toting a number of added game modes, locations and features– we can’t help but feel gamers may want to wait to decide for themselves which version is best.

On the plus side, developers Deceased Pixel have also promised additional levels, enemies and modes in future updates, so it seems the battle for worm king has only just begun. In any case, be sure to play Effing Worms on Flash and check out the trailers to see what you’re getting yourselves into and visit our forums for our readers’ opinions on just how juicy this worm really is.