As someone who’s been a gamer for 30 years now, I must say things have come a long way from those distant, humble beginnings.

A few crude black and white blocks turned into somewhat less crude color blocks, which became much nicer looking high-palette pixel art and — flash forward 20 years — we’ve got expansive 3D worlds rendered sharper than a high-definition feature film. Technology marches ever on and, along the way, has brought gamers a vast array of computers and consoles, each a step forward from the one that came before. And the largest single step forward along these lines that ever took place was unquestionably the arrival of the Amiga from Commodore.

At half the price of the Macintosh and a quarter the price of IBM’s meatiest desktop, the Amiga, which PC World called the seventh greatest computer of all time, delivered vastly more capable hardware than either, along with a fully preemptive multitasking UNIX-like operating system. Nothing of the likes of its graphics and audio capabilities had ever been seen before. It excelled in gaming and this new sort of thing called “multimedia" that, at the time, people really didn’t know what to make of. It really was 10 years before its time.

This year marks the 25th anniversary of the Amiga and a number of tech sites are taking the opportunity to pay tribute to this infulential platform with retrospectives and historical pieces. And, we’re happy to report that Amiga and iPhone developer Rabah Shihab is honoring the occasion by dropping the price of Babylonian Twins for the iPhone [App Store] by 75% this weekend. 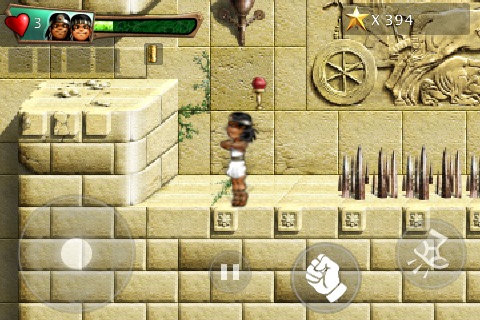 We took a close look at this reimagining of his 17-year old Amiga title back in April and found it to be one of the very best iPhone games out there (we gave it 4.5 stars). An iPad version is also available [App Store].

Babylonian Twins is s a puzzle-platformer with two-character tag-team type play. You control brothers Nasir and Blasir in order to solve each levels. Each character has some special abilities, but only one can be active at once. Switching between the two is as simple as tapping on a button — leaving the unplayed character as a statue. You’ll find you need to tag team to make your way past puzzles and obstacles, and even use the other character as a springboard to jump higher. Blasir can jump higher, and dash into walls, while Nasir spin to break through weakened floors. The game is a collaborative effort between the two characters.

The game has been entirely revamped since the original Amiga version and includes all new graphics and audio.

And, while Babylonian Twins is a truly excellent title, it’s not the only quality Amiga conversion in the App store. Not by a long shot. And, thanks to Manomio, among others, we’re in for a lot more Amiga game goodness in the App Store later this year.