Flashback [App Store] is a game developed by the long-gone french game developer Delphine Software for the Amiga in 1992. Since then it got picked up by various other companies and ported to a ridiculous amount of different platforms. Notable at the time for its unusually fluid, rotoscoped animation, Flashback has existed on everything from the Acorn Archimedes to the Sega CD, and most of the consoles in between. As far as cinematic platformers are concerned, it has few rivals.

I first came in to contact with Flashback on the Sega Genesis, originally attracted to the game because of the comic book that came with it and the way they marketed the cartridge. (Supposedly it was the largest cartridge ever sold at the time.) In a time before GameFAQs I’d quickly get stuck or die, but still had a lot of fun. 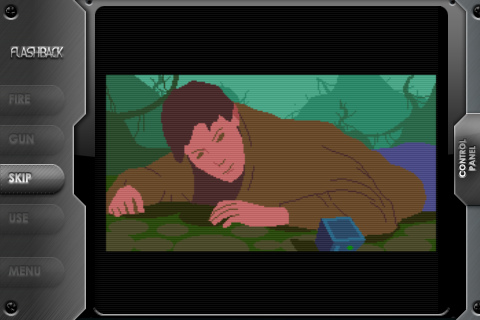 You play the role of Conrad B. Hart who is trying to regain his lost memory to save the world in the cyberpunk dystopian world the game is set in. On your journey you come across plot twists, conspiracies, aliens, and everything else you’d expect to see in a solid science fiction game. Similar to Myst [App Store], Flashback can be a fairly short game if you know exactly what you’re doing. Fortunately, figuring out where to go and what items to use where is half the fun and if you don’t cheat by looking at guides, completing the game should take you a decent amount of time. 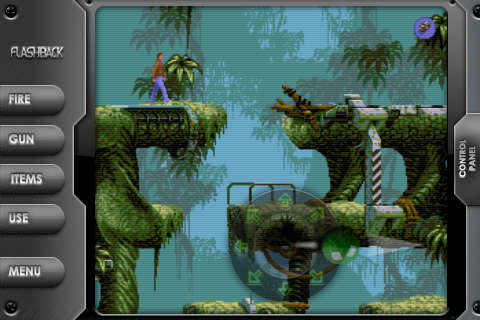 In the iPhone version of the game, buttons that control your character’s actions line the left side of the screen and movement is controlled by using a virtual D-Pad that pops up wherever you place your finger on screen. Unfortunately, controls can be a little awkward, as the use of the “Fire" button needs to be used in combination with the virtual pad to accomplish running and running jumps.

One curious thing I noticed about the iPhone port is while the file size of the download from the App Store is only 1.1MB, it  has you download another 3MB the first time you launch the game, so be aware of that if you have limited connectivity.