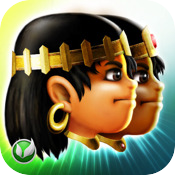 Sixteen years ago, as the developers tell the tale, Rabah Shihab led a team at Baghdad University, Iraq to develop an original puzzle/platformer for the Amiga, inspired by what he saw of other games’ depiction of his home country.

As he explained in an interview with Amiga Games That Weren’t,

…My real dedication for this theme came during the early nineties after I saw a computer game in which you control a warplane with the goal of bombing Iraq. Putting the bombing aside (I was in Baghdad during the first gulf war and I saw the human suffering that resulted from the real bombing ), I didn’t like the way they depicted Iraq in the game, as a primitive and uncivilized place. I wanted to build a game that counter that image, a game that shows the vibrant history of Mesopotamia. In Babylonian Twins, the game takes you to different historical places, from Babylon to Assyria. We relied on authentic history books to design many of the graphics in the game.

Under the extraordinary conditions caused by the economic sanctions of Iraq at that time, the first Iraqi-developed game never came to be; a well-loved, early Amiga demo release was all we ever saw. Last week however, saw the arrival of Babylonian Twins — The Quest for Peace in Ancient Iraq [AppStore] and Babylonian Twins HD [AppStore] to the iPhone and iPad respectively, the result of a re-union of that development team.

Babylonian Twins is both a port and re-imagination of that original Amiga title. All the artwork has been re-done from scratch in rich, high definition and the original, middle eastern score and gameplay elements have all been improved. It is obvious that this has all been attended to with the utmost care, as there are no outward signs that this is in fact a port, beyond a grand style of gameplay that harkens back to the golden age of the Amiga. 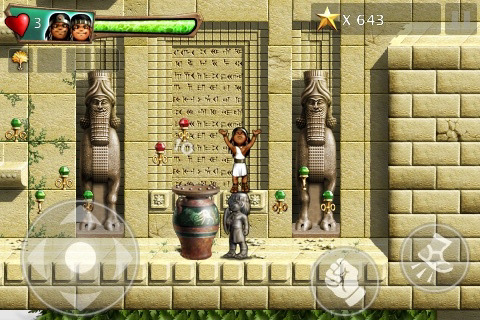 The story begins with the plight of the twin princes of Babylon, imprisoned by an evil sorcerer who has cursed the city in which they live. It is a thread-bare tale told merely to give some context to the unique gameplay elements herein, foremost of which is the ability to control two protagonists with differing abilities. Blasir is able to jump higher than his brother, and is able to Dash mid-air to access hidden locations or break through weakened walls. Nasir on the other hand, has a mace capable of breaking objects and a Drill ability that destroys broken ground underfoot. Movement and attacks are handled with the standard platformer on-screen D-Pad and thumb buttons. 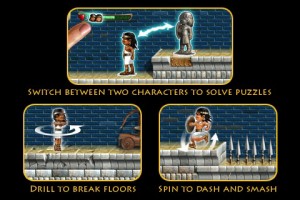 Nasir and Blasir are played interdependently, relying on each other’s strengths to reach otherwise inaccessible locations, though only one twin is under your immediate control at any given time. When this happens, the other freezes into a statue, providing an oft-used height boost for out-of-reach areas or a weight to trigger pressure switches. In some ways this co-operative gameplay is reminiscent of another Amiga classic, The Lost Vikings, one of Blizzard’s earliest titles (when they were known as Silicon and Synapse).

These simple gameplay features form the premise for some of the most interesting and expansive level designs that we have seen to date on the platform. In many ways, Babylonian Twins does away with contemporary trends in gaming, and re-instates the old-school values of a challenging, explorative platformer that refuses to hold you by the hand. There are no directional arrows or maps to point you towards the golden palm trees you must collect each level. In fact, even crucial objects such as the aforementioned broken walls and floors are easily missed unless you’re paying attention. And each level is enormous– an adventure in and of itself– many of our completion times clocking in at around 30 minutes each. 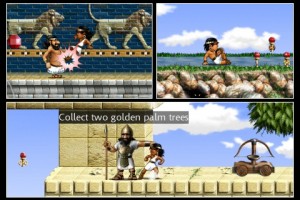 To some, this may seem overbearing, but we thoroughly appreciated the breathe of fresh air that comes with a game that respects its players, and isn’t just another title that can be waltzed through with minimal effort. Much of our time was spent exploring the colorful, wonderfully crafted middle-eastern environments; not to take in the vistas, but to puzzle out what path we had yet to take, and what vital element we were missing that was stalling our progress. That and avoiding the many pitfalls and enemies peppered across each landscape.

Babylonian Twins isn’t completely unforgiving, having both a generous health bar for each twin and three lives between them to ease enemy encounters. That said, we expected that it would be replete with a checkpoint system and a resume feature to handle call-interruption. Unfortunately, these are not included to the extent they should, the latter proving especially frustrating on one occasion when 25 minutes of gameplay was wiped with the end in sight. Fortunately, the developer has indicated on our forums that this is being looked into, and that further checkpoints may be added in future versions. 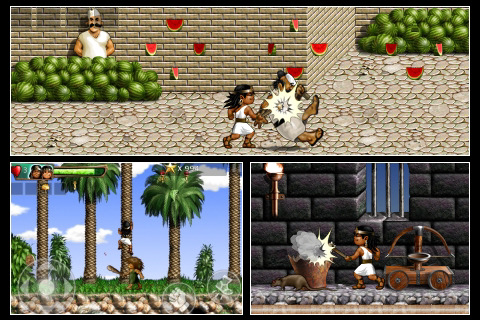 This shouldn’t be reason though to miss one of the most engaging platformers that we have had the pleasure of playing in a long while. While the artwork is stunning (apparently there was significant historical research behind much of the environment) and the terrific accompanying score both retro and authentically middle-eastern, the real selling point is the core gameplay. OpenFeint high scores and achievements (which include a near-impossible to find hidden trove of treasures) only accentuate a style of play that is heavy on exploration and puzzles designed to really challenge you. This won’t be a game breezed through in a few short hours, but will require dedication to learn and reasoning to execute.

In true puzzle fashion, when your synapses are firing and each of the dozen levels are finally completed, your efforts pay off with a feeling of satisfaction and achievement that’s second to none. That’s when Babylonian Twins again shows its nature, offering two secret, additional levels when further time and life challenges are met. This is certainly a game that will remain on our iPhones and iPads for a long time to come, a sentiment shared by many of our readers who are posting their own impressions in our forums.