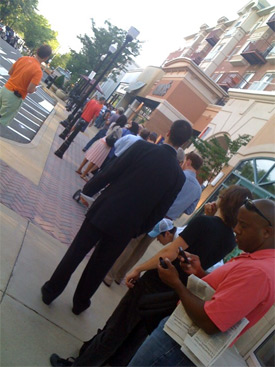 Apple retail stores opened at 7 a.m. in all time zones to facilitate the launch of the iPhone family’s new flagship device.  At some of the major Apple retail stores around the world, lines began to form as early as yesterday afternoon.

Reports are in that, lines aside, the process of purchasing and activating a 3G S is quick and painless — in and out in just a few minutes.  Those who setup mail pre-orders should be receiving their units today (although we’ve heard reports from a few users seeing a shipping indication of Monday).

As we described in some detail last week, the iPhone 3G S features a significantly faster main processor and a much more capable graphics processor as compared to the iPhone 3G.  Additionally, the unit features twice the system RAM of the iPhone 3G, which should improve the overall stability of apps running on the device.

While many existing games will automatically benefit from the added muscle of the iPhone 3G S, we’re anxious to see the first titles that appear with features that specficially target the new capabilities of the device.  The first games supporting iPhone OS 3.0 have already appeared — stay tuned for upcoming games with GPU shader support and other such goodness.  Watch out Sony and Nintendo….