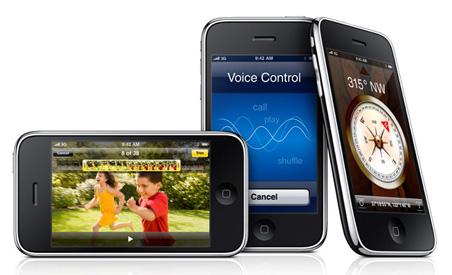 At Apple’s WWDC keynote on Monday, a faster, new iPhone was announced, as expected.  Apple indicates that the the new iPhone is based on an updated chipset that is “up to 2x faster" and that it supports OpenGL ES 2.0.  And that’s all they’ve indicated about the hardware.  Even to the iPhone developers attending this week’s conference.

As we detailed early on, the iPhone and iPhone 3G use a Samsung System-on-Chip that contains an ARM11 processor core (532MHz in the 2G iPod touch, 412MHz in the rest of the family) with 128MB of system RAM and a PowerVR MBX-lite graphics processor.  Early signs pointed to the next generation iPhone containing a faster ARM processor core and the next generation of Imagination Technology’s PowerVR GPU, the SGX.

Now, shortly after the announcement of the new iPhone, the first official processor spec information has surfaced on a page at T-mobile.nl, which indicates that the iPhone 3G S features a 600MHz processor and 256MB of system RAM.  And, indeed, it seems that the OpenGL ES 2.0-capable PowerVR SGX is driving the graphics side of the new device.

Providing much more detail about the inner workings of the iPhone 3G S is AnandTech’s recent post “The iPhone 3GS Hardware Exposed & Analyzed".  Within, Anand provides a detailed breakdown of the new iPhone’s processor and GPU, according to their sources.

The breakdown reveals that the iPhone 3G S is based on (again) a Samsung SoC, but with an ARM Cortex A8 processor and PowerVR SGX GPU.  This combination of hardware offers substantially more power to application developers than the previous iPhone chipset, especially in the area of 3D graphics. 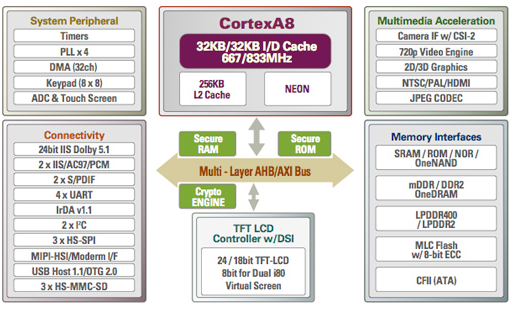 On the CPU front, the performance improvement is about much more than simply a 188MHz boost in clockspeed.  The ARM11 processor in the iPhone and iPhone 3G is a single-issue, in-order core on a 90nm process which can fetch, decode, and execute one RISC instruction at a time.  It features 32K of Level 1 cache and no Level 2 cache.  The Cortex A8, by comparison, is a dual-issue, in order order core on a 65nm process that can fetch, decode, and execute two RISC processes at a time.  It is believed that the unit features 64K of L1 cache and 256K of L2 cache.  Additionally, while the earlier ARM11 core contains a basic vector floating point unit, the Cortex A8 adds a much more advanced SIMD engine known as NEON.  The A8 also sports twice as many double-precision floating point registers as the ARM11.  These elements come together to provide a substantial increase in processing power as compared to the previous iPhone chipset.

Such a significant performance increase is big news for gamers and gamemakers alike.  We’re very anxious to see how developers harness the additional power of the iPhone 3G S.  It may look like just the same old iPhone on the outside, but under the hood it’s a screamer.  Sony and Nintendo have good cause to shift from worry to fear as this hardware makes its way into users’ hands.  The PSP has nothing on Apple’s latest mobile game console.