During the week of Macworld Expo, the day’s Apple-related fun doesn’t end with the daily closing of the Expo floor. Various parties and meet-ups are scheduled through the evening throughout the city. Last night we both attended one such gathering, the iPhone Intelligence Party hosted by iPhone promoter / evangelist Raven Zachary.

The event was a gathering of iPhone developers, enthusiasts, and press, with a focus on iPhone gaming. Various developers demonstrated their titles to the crowd on a largescreen projector while small LCDs embedded in the wall showed several iPhone games in play. It was an interesting venue and a great time was had by all in attendance.

We had a chance to speak with a number of iPhone game developers about their current titles and what they’ve got in the pipeline. Photos of some of the folks we spoke with can be seen below. 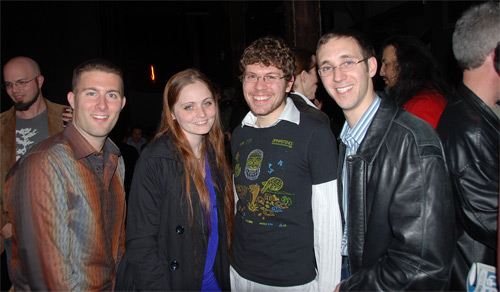 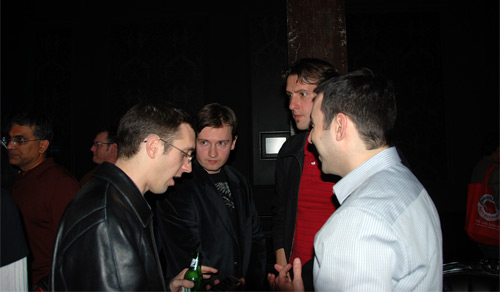 Ng:moco was demonstrating an upcoming word puzzle game known as Word-Fu! which visually resembles Motion-X and involves tapping blocks of letters and shaking the phone to form words. Not a lot of details on this one right now. We spoke with ng:moco CEO Neil Young who mentioned another forthcoming title called Touch Pets that is, in his words, “Nintendogs meets The Sims." Touch Pets should see release sometime between March and May of this year.

We captured a rather grainy video of the event while we were there, which includes footage of the upcoming Word-Fu! Have a look if you don’t mind a little eye-strain.

Have a look at our Macworld Expo 2009 Flickr group for more photos of the week’s event.