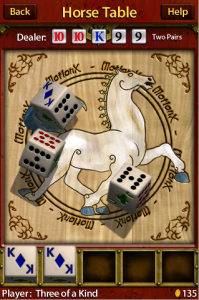 Once you hear about a game enough times, you start to wonder if you’re missing something. That’s what happened to me with MotionX Poker [App Store] and so I bought it ($4.99) to see what the fuss was about.

MotionX Poker is a dice poker game based on FullPower technology which is a motion recognition technology platform. For this iPhone game, it provides realistic dice rolling physics to provide an impressive package.

Based on dice poker, the game allows you to play against the computer by rolling the dice to make your best poker hand. You get 3 rolls and are allowed to keep whichever pieces you want with each roll. After three rolls, whoever has the best hand, wins. (One caveat for card poker players, due to the decreased probability of a straight, a straight actually has a higher value than a full house in dice poker.)

What really gives this game an edge, however, is the impressive use of the iPhone’s technologies to deliver the game to you. Shaking the iPhone itself is what triggers the roll of the dice. The dice bounce so realistically and with such wonderful graphics and sound effects, it gives you the impression you are actually rolling real dice. The game also taps into the iPhone’s vibration mode to give you some force feedback while the dice are bouncing around.

In order to keep things interesting, the game offers a number of “Gem" achievements when you accomplish certain goals. These include simple tasks, such as winning 10 hands, and winning with the same hand twice in a row, to long term tasks, such as earning a 2.5 million coin bankroll. In addition, higher stake tables are unlocked as your bankroll grows.

Without considering the game itself, MotionX Poker is remarkable technology demonstration and could earn its place on your iPhone just to show interested passers-by. And to be honest, when I first started playing with it, I thought that’s all it was. The game was a bit slow to draw me in, and I wondered if I would ever play it again.

But, once you start playing for an extended session and accomplishing some achievements, it becomes easy to get sucked in and hypnotized by the gameplay. Playing another round is just a shake of your iPhone away. With such quick gameplay, I could see this being a “goto" game for many when they are standing in line or otherwise in need for a short distraction. I don’t think this game is necessarily for everyone, however, as some may bore of it, but for many, it will be a fun diversion.