Earlier this year, I interviewed Feral Interactive about them porting games to mobile and asked about a potential mobile version of Alien: Isolation ($14.99) and was surprised at the response I got. Back then, I thought the Nintendo Switch port existing meant it would eventually come to mobile, but I didn’t think it would happen this soon. Creative Assembly’s survival horror experience has not only been ported to mobile by Feral Interactive, but it has gotten a phenomenal conversion going above and beyond. 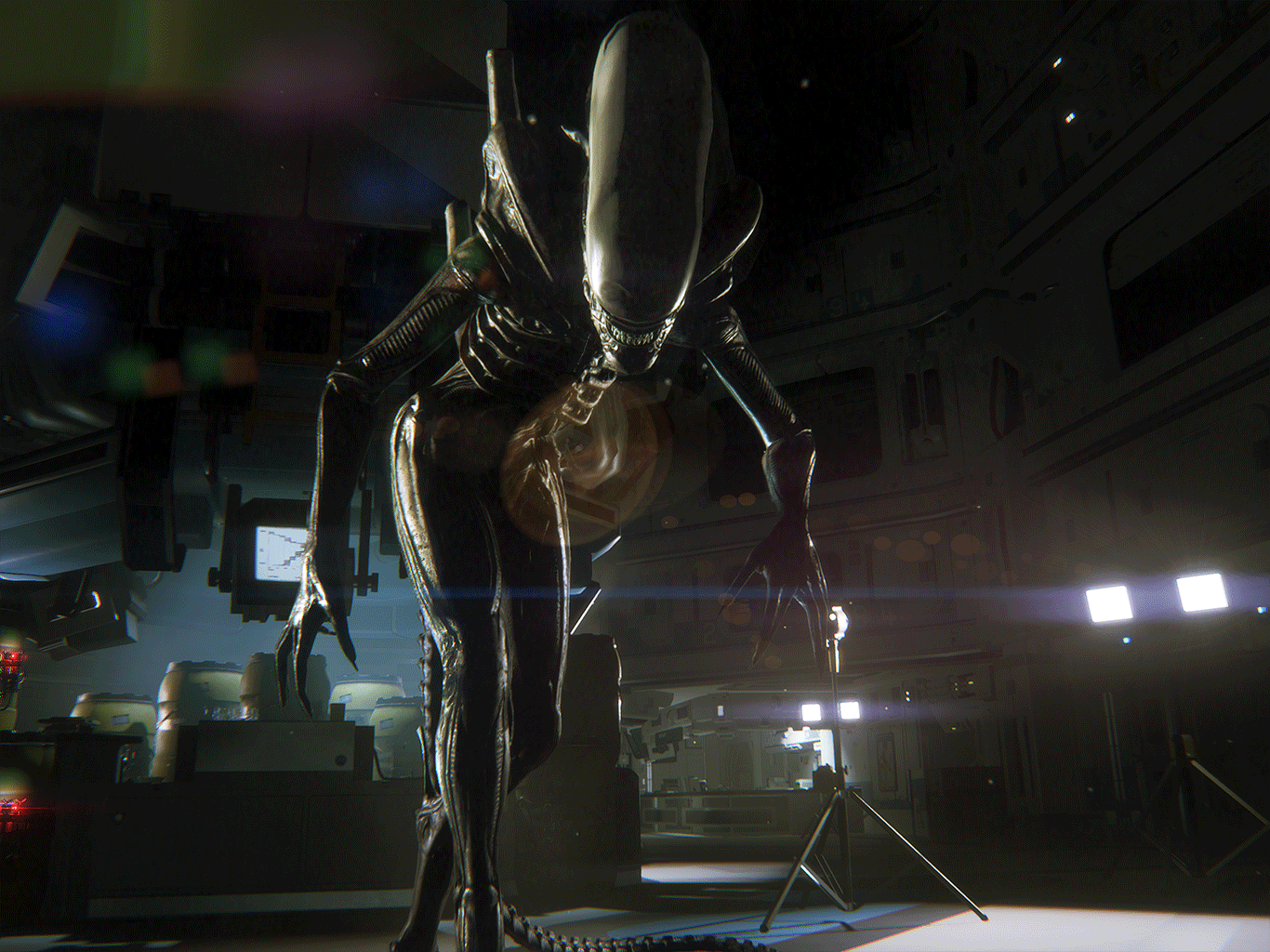 Alien: Isolation on iOS includes the base game, all seven DLC packs including Crew Expendable, Last Survivor, and the Survivor Mode all at the asking price of $14.99. This is a lot less than other platforms and less than half of Feral Interactive’s Nintendo Switch port from last year. I expected the lower asking price given the platform, but I continue to be impressed with how the game runs on every device I’ve tried it on so far.

Creative Assembly’s Alien: Isolation is set 15 years after the original movie and you take on the role of Amanda Ripley. Amanda learns that Ellen Ripley’s (her mother) ship flight recorder has been recovered. While Amanda tries to investigate the Sevastopol space station, the Xenomorph makes quite the appearance. What makes it worth experiencing is how the alien seemingly adapts to come after you and how you use the brilliant audio design to ensure you avoid it when possible. Alien: Isolation is a survival horror game with infrequent save points. You will explore, get into vents, hide in various places, and more as you try to survive and progress. The save system is very different from what I expected. When you find a new save point and save, you can’t immediately save again and have to wait for a set amount of time. This adds to the tension and strategy as you have to decide when to save because even that isn’t immediate. 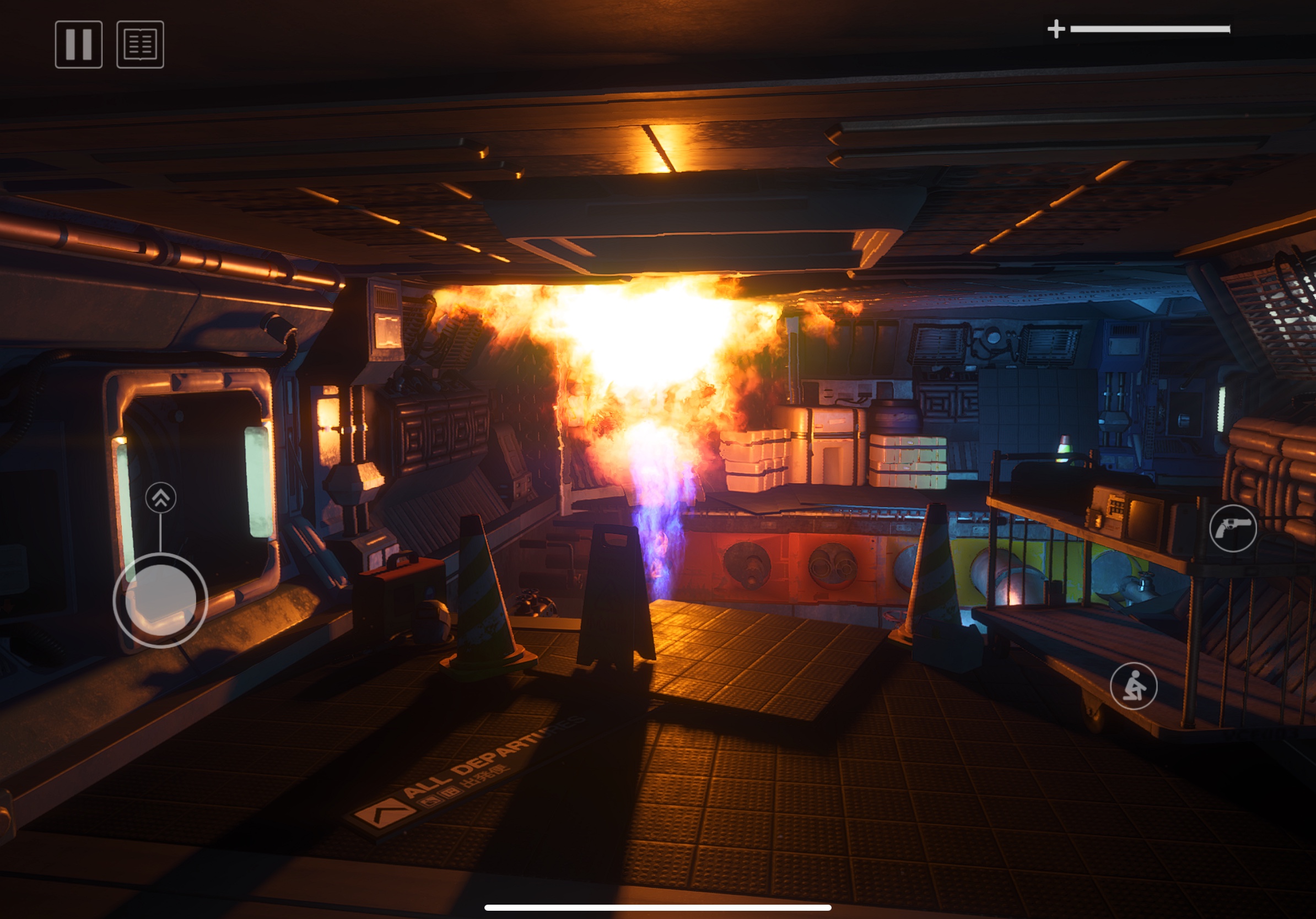 When Alien: Isolation launched on PS4, Xbox, PC, and more over half a decade ago, it was praised for the atmosphere and for the behavior of the single alien that is constantly trying to find and kill you. Alien: Isolation was a great looking game back then, and it has aged brilliantly in most ways. Barring the character models looking dated, the atmosphere is sublime. The AI behavior of the alien hunting you has also been understandably praised quite a bit as it gives the impression of learning and improving as the game progresses. The only frustration some players might have will be about the save system and the lack of a lenient checkpointing system that modern games have.

We already know Alien: Isolation plays great with a controller, but I was curious how it would be as a touch-only experience. It took me a little bit of getting used to aiming and interacting, but Feral Interactive’s interface here is excellent even if you don’t really play on a touchscreen often. Having tried Alien: Isolation over multiple setups on iOS and iPadOS, my ideal one is using headphones, my iPad Pro, and my PS5 DualSense controller for iPad play or wireless headphones and iPhone with touch controls for iPhone play. It has been interesting seeing how some interactions have been slightly changed for touch controls versus how they play out with a controller.

Feral Interactive usually tunes graphics and performance options per device perfectly, but I am glad that the studio has started giving players control over this aspect of the experience in recent releases. Alien: Isolation lets you play at the default graphics priority that opts for the highest quality visuals, a performance mode with a higher frame rate target (on the devices I tried it on), and a battery saver mode. While I don’t have access to the newest iPad hardware with an M1 chip, Alien: Isolation looks stunning on my iPad Pro and iPhone 11. Having already ported Alien: Isolation to macOS and Nintendo Switch, Feral Interactive clearly were the best choice for the iOS release. 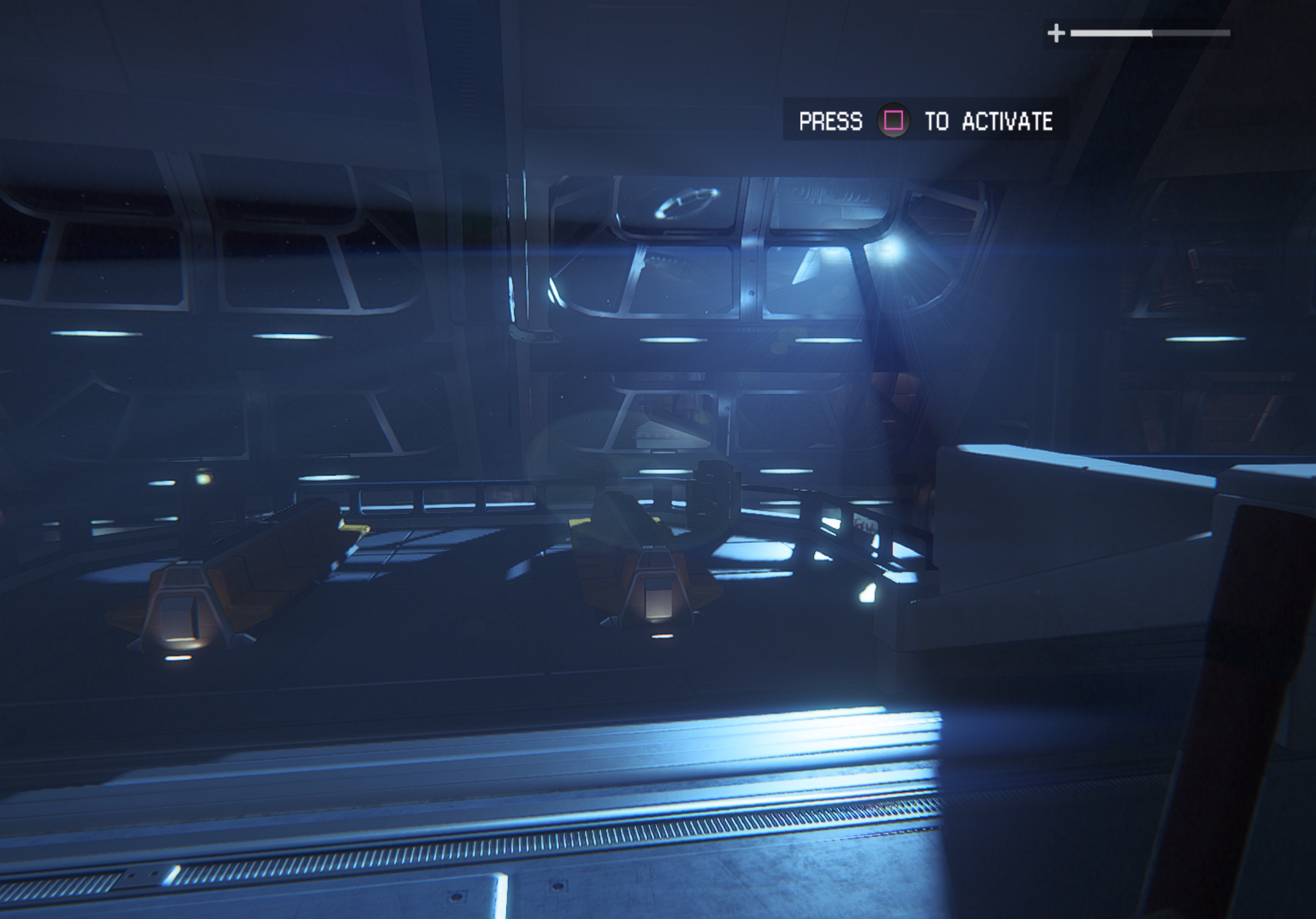 In my testing, the graphics mode with the seemingly 30fps target has proper frame pacing as well so it doesn’t feel uneven. The performance mode has a small drop in overall visual fidelity if you look closely, but it is worth it given the smooth performance (seemingly 60fps target) that is only possible on Xbox Series and of course PC barring this new mobile version. There are even options for the film grain, chromatic aberration, and FOV options (47 to 75). While some mobile versions of PC and console games either give players customization options at the cost of polish, Alien: Isolation has both and every setting feels like it has been tested to ensure the least or no issues possible during gameplay.

As with other premium Feral Interactive conversions, file size is a concern. When you launch Alien: Isolation, you are prompted to download DLC packs. You can do this now or wait to do it through the DLC management in-game later on. The Survivor Mode is an additional download with the game’s total install size around 11GB. I wish Apple would increase the file size limit for certain developers on the App Store because this just adds additional work for the developer and extra steps that sometimes take too much time for users. Thankfully, Feral Interactive’s implementation is great and I have run into no issues on two different connections across 4 iOS and iPadOS devices I tested Alien: Isolation on.

Beyond control options and controller-related features, Alien: Isolation has iCloud save support. On launching the game on another device, you are prompted to either choose your local or cloud save to continue. I had no issues with this in the last week across my iPhone 11 and iPad Pro (2020). I know some take iCloud save support for granted, but far too many ports release these days without it and the ones that do have it feel a little buggy. I wish more games had reliable iCloud save syncing like Alien: Isolation and other Feral Interactive releases.

Alien: Isolation is the rare iOS port of where I don’t have anything bad to say about it. It has every single feature I consider essential to a mobile port and a lot more. The few things I would like to potentially see in future updates are gyro support for aiming and 120hz support if that even is feasible on the newer iPads. I know Feral Interactive addressed 120hz support on iPhone but hopefully future iPhones or the current iPad Pros can get an optional mode for it. Barring those features, the only other thing I’d want is held back by Apple’s storage restrictions on the App Store. Hopefully 2022 sees Apple allow at least developers like Feral Interactive to ship larger games without forcing users to spend time downloading assets on launch.

If you’ve not played Alien: Isolation before, the mobile version is phenomenal. It isn’t just a good value proposition with all DLC included at the low asking price of $14.99 compared to other platforms, but it looks and runs brilliantly even compared to the Xbox and PS4 versions. I know Feral Interactive is capable of miracle mobile conversions, but this Alien: Isolation is on a whole other level. Having tried it on consoles including the new Xbox Series X where it has an FPS Boost through backward compatibility, the iPad version with good headphones and an optional controller trumps all other console versions of the game. If you’ve been wanting to experience Alien: Isolation, this is a fantastic way to do so and one of the best iOS conversions ever.