Given how great Apple’s support for older devices is, I usually hold on to my iPhone and iPad for a few years at least before looking to upgrade as long as they work fine. While I definitely regret buying the iPad 3rd generation with how underpowered it ended up being, the iPad Air 2 was a fantastic device not just for gaming but also for work. It slowly started to become sluggish with newer games and some games I wanted to play on touch didn’t support it. Upgrading to the iPad Pro 2020 has been great with how well almost everything I play runs on it but one specific game announcement pushed me more towards upgrading. That was the original WWDC reveal for Divinity: Original Sin 2 ($24.99) from Larian Studios. 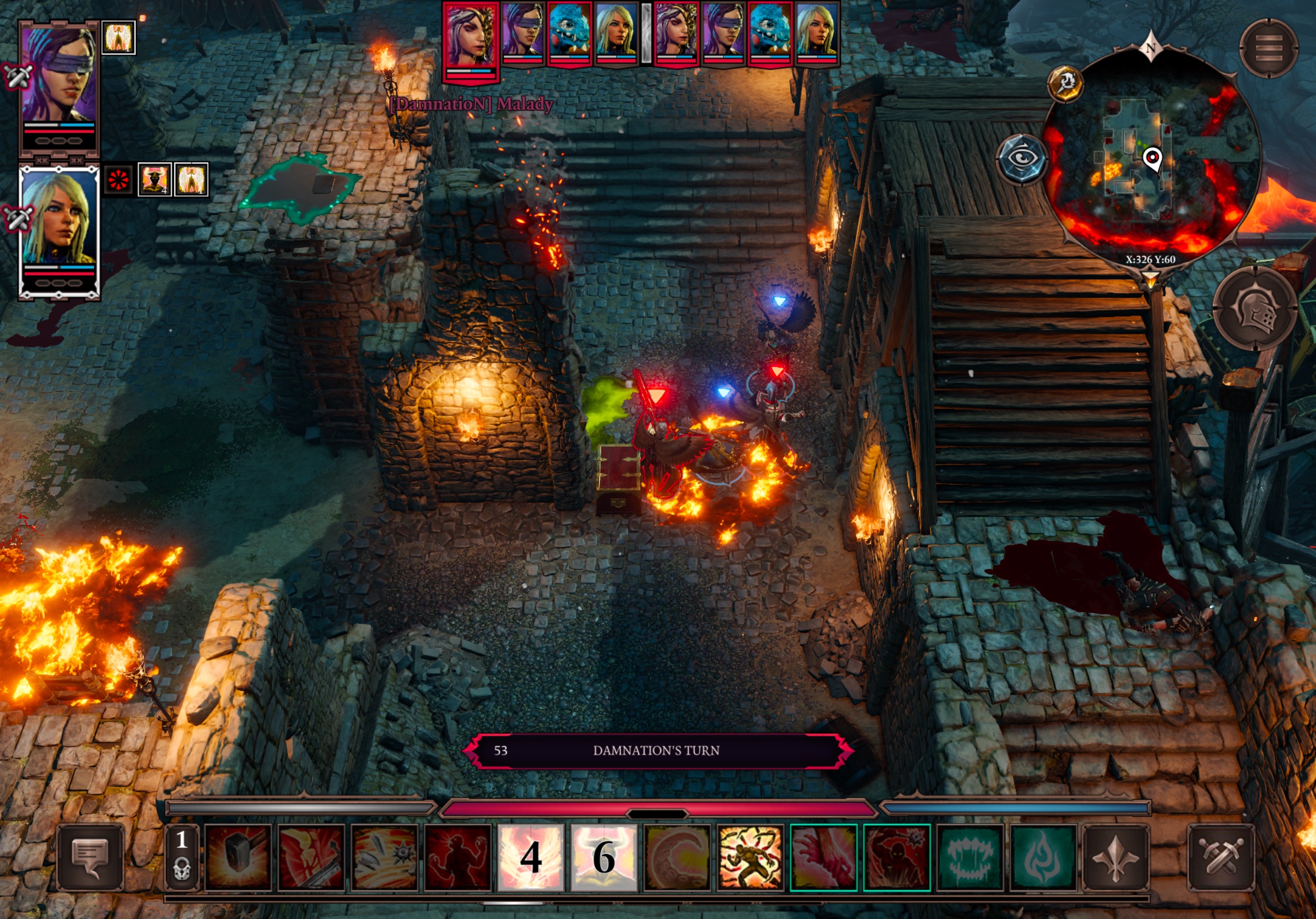 After that announcement, a lot of people including myself were skeptical of how Divinity: Original Sin 2 would look and run on an actual iPad. I say this because I’ve played it on every platform now and both knowing how it runs on PS4/Xbox and how it looks and feels on Nintendo Switch made me worry the iPad version might be based on the latter despite that version being great on a technical level for the hardware. Thankfully, Divinity: Original Sin 2 (brought to iPad by Elverils) on iPad not only looks and feels great, but it offers a few things the console versions don’t have while serving as the best and most convenient way to play the game on the go… assuming you have an iPad that is capable of running it. 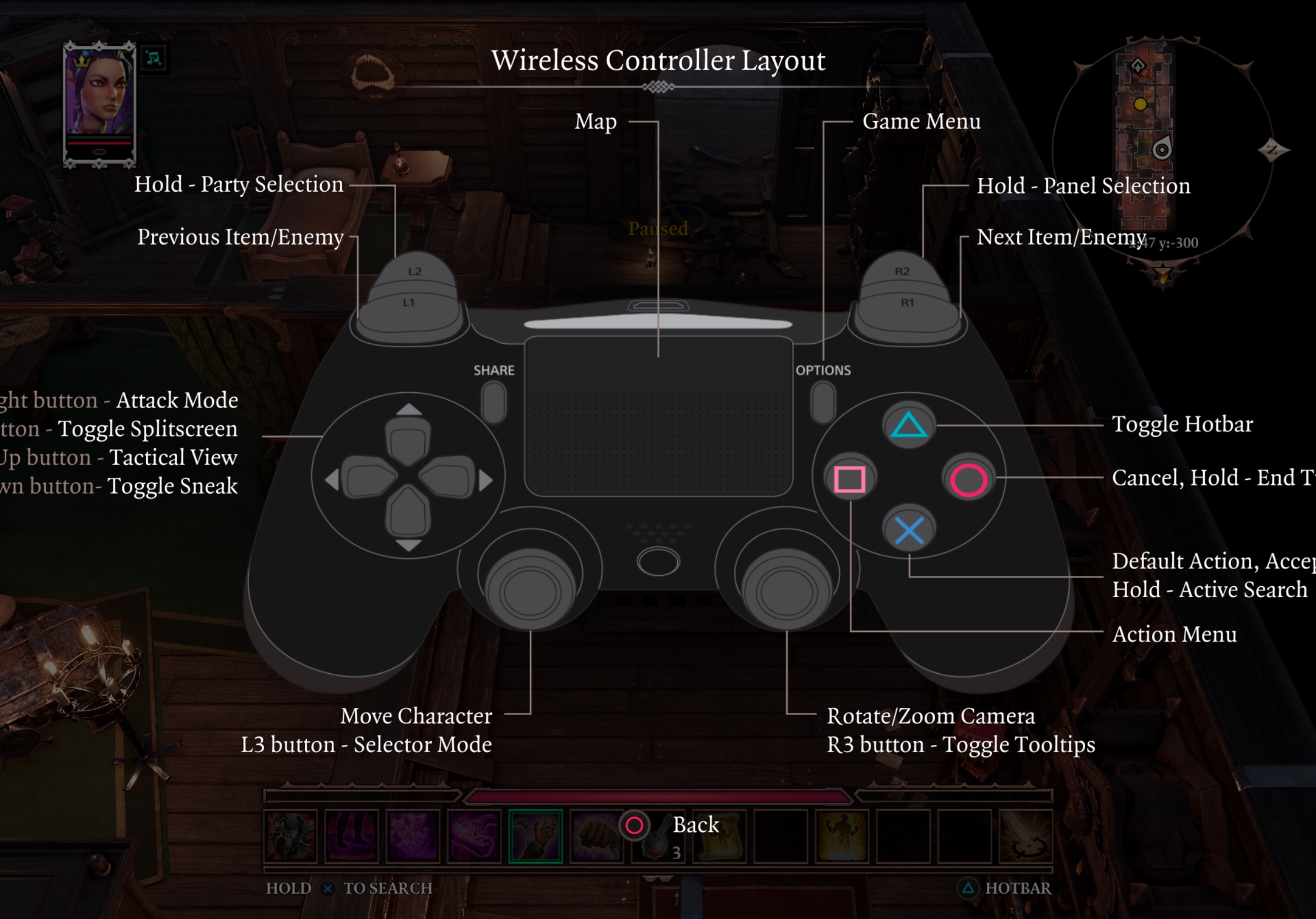 In terms of content, Divinity: Original Sin 2 on iPad is the Definitive Edition incarnation of the game with all the fixes, enhancements, and updates from the original. You also get access to the post-launch gift bags or goodie bags that have been added to other platforms. These are worth looking into once you know the basics of the game so you understand what you’re enabling or disabling here. One thing to keep in mind is in how Divinity: Original Sin 2 is downloaded on iPad. You initially download a few GB but are asked to download a little over 13GB after the early segment you play on the ship. Try and have all the space you need before playing because the game seemed to not save my progress when I didn’t have enough space to download the rest of the content initially. With everything installed, Divinity: Original Sin 2 takes up over 17GB on my iPad and is easily the largest game on the system not just in size but also in ambition. I hope a future update adds the ability to pre-install this content from the main menu to avoid any potential progress loss.

Divinity: Original Sin 2 has three control options but sadly doesn’t offer the ability to use a mix of control schemes. You can play with all-new touch controls built for the iPad version of Divinity: Original Sin 2, with a controller (I used my PS5 DualSense controller) like the console version, or even go for the PC experience with keyboard and mouse support. All three of these control schemes have interfaces adapted for them and appropriate button prompts which is awesome to see. This extends to different button prompts for PlayStation and Xbox controllers. The only potential issue as an edge case is that splitscreen only supports a single button prompt option even if two players use different controllers. 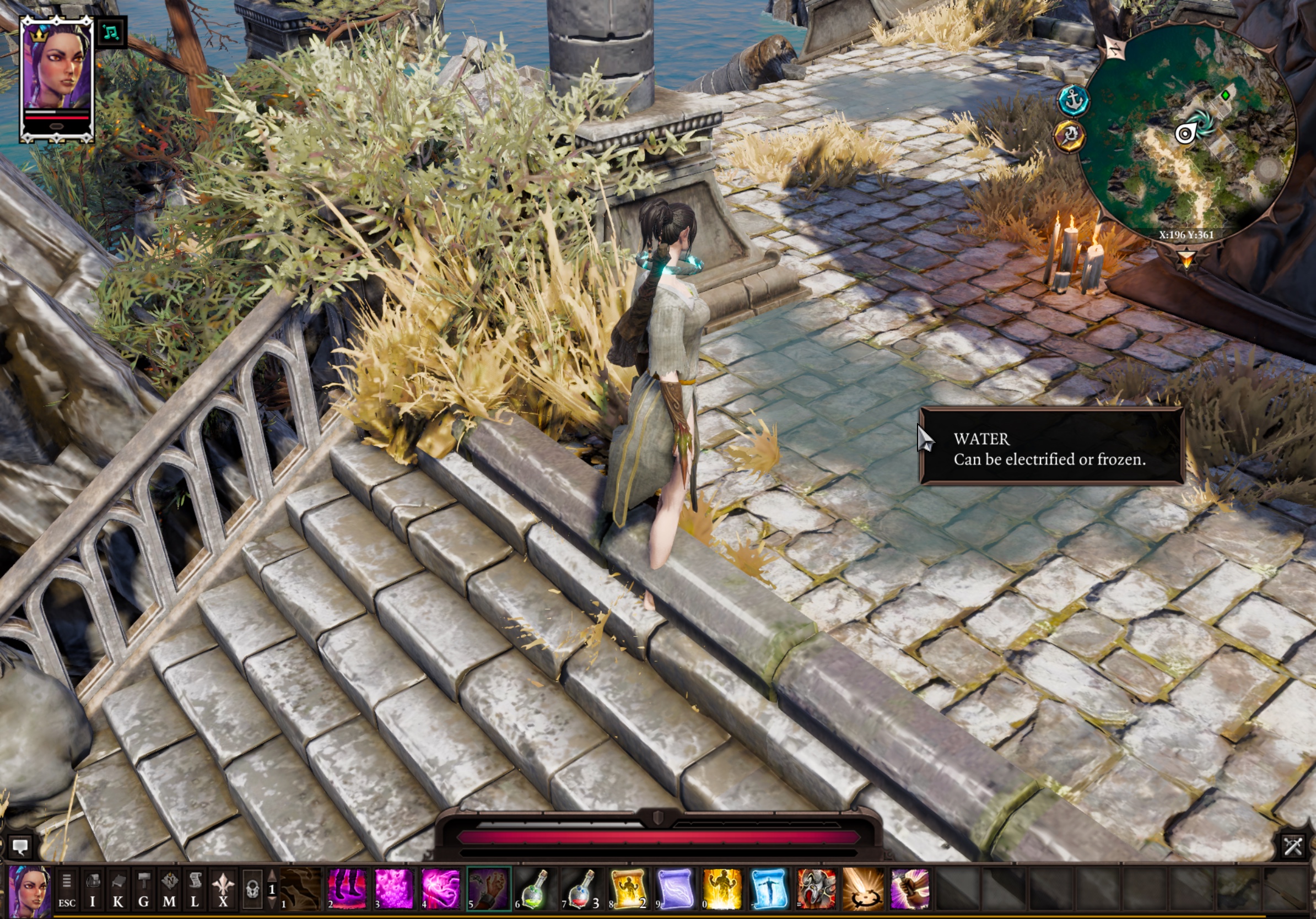 Speaking of splitscreen, Divinity: Original Sin 2 on iPad supports full drop in and drop out splitscreen co-op play. This isn’t supported in the Nintendo Switch version and that isn’t surprising given how many cutbacks were made to get the game to run at a 30fps target on Nintendo’s hybrid system in the first place. Splitscreen is essentially rendering two games at once and this is pretty mindblowing to see on an iPad. On iPad Pro 2020, the frame rate is obviously nowhere near 60fps but it manages to run really well and felt better to play than it did on my PS4 Pro and Xbox One X. This obviously doesn’t come close to the frame rate available on PC with the game running at over 100fps on my laptop from a few years ago but is great to see given the visuals on display on iPad across splitscreen and normal play.

When I had access to Divinity: Original Sin 2 pre-release on iPad, I didn’t get a chance to properly check out the matchmaking and online cross platform play and I definitely wanted to see how this conversion ended up when played online for review. I tested Divinity: Original Sin 2 on my own iPad Pro, my own laptop running the game on Steam (on LAN), and with a friend of mine who also used the Steam version (online). When I managed getting into a lobby for the campaign or the arena, everything worked great across all devices but I couldn’t find a single lobby when I searched for online lobbies on iPad. I had to join my friend’s lobby through the server code he sent me. For LAN, the lobby loaded up instantly. I’m not sure whether this is a bug or an issue on my end but I tried re-installing the game and couldn’t find any online lobbies even when I had one created on my own laptop or when my friend made one to play with me. If you do want to play Divinity: Original Sin 2 with someone on PC, I’d recommend asking for a server ID and then getting into the game for the quickest experience. The searching for a server delay also is very long on iPad versus PC on the same internet connection. 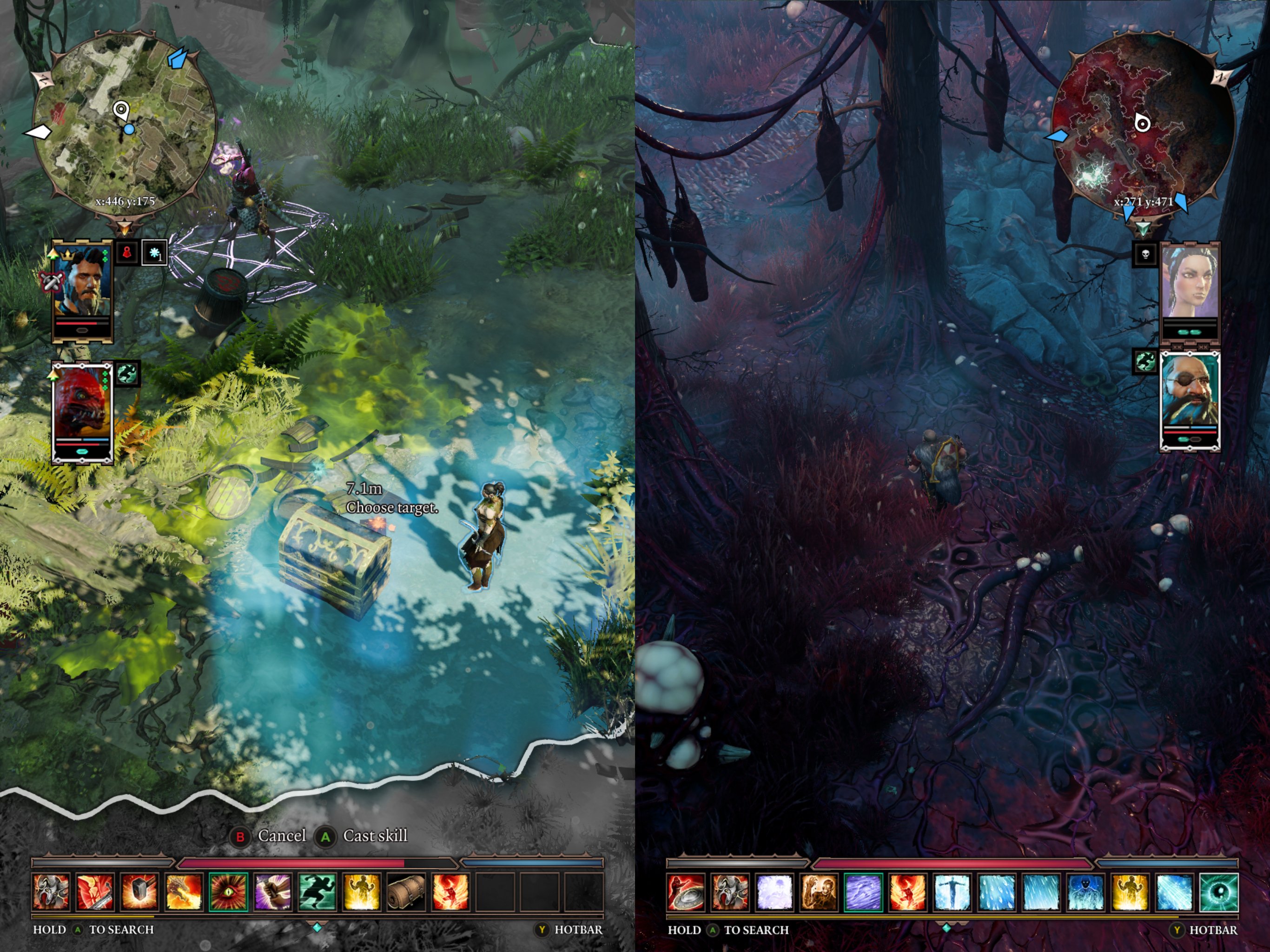 I mentioned not being able to use a mix of controls and while that will probably be ok for most people, especially those who use controllers, I was hoping to be able to use my bluetooth keyboard and touch controls together or to be able to pan and zoom with touch while using a controller. Right now, you can press a button, key, or touch the screen when you launch the game to go into a specific control option. Changing this requires disconnecting the connected control option or going back to the title screen. The game doesn’t adjust on the fly if you tap the screen while using a controller paired so keep that in mind.

Having played the game on consoles ever since the initial PS4 and Xbox One release into the Nintendo Switch port, I was more than pleased with the controller support. Larian Studios nailed the controls in the console port of the original and they actually backported the controller support to PC unlike most developers who make PC RPGs that eventually go to console with no controller support as an option for PC players. The touch controls here scale well and feel great to use. I ended up preferring the touch interface over using a controller by the end. With touch controls, the hotbar icons are larger, touch targets on menus are larger, and you have the ability to pan and pinch anywhere on the screen to change the camera. The in-game tooltips do a great job of getting you accustomed to the controls if you’ve never played the game before as well right from the get go. In fact, The tutorial section in the beginning helps a lot with learning the control scheme you have selected. I’d recommend trying this tutorial with all your available control options so you know which one you like the most before setting off on this massive adventure. 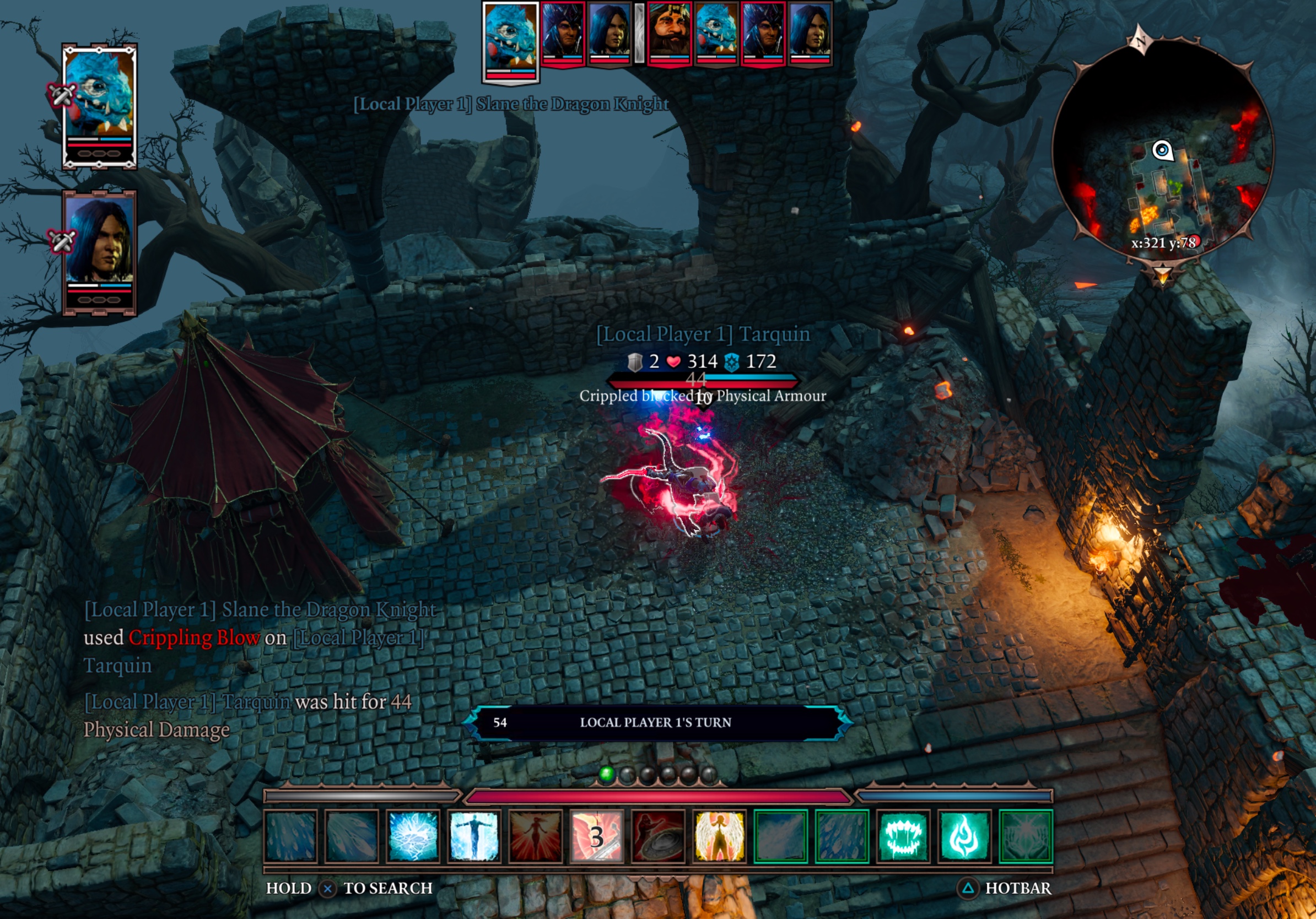 Visually, Divinity: Original Sin 2 is stunning on my iPad Pro 2020. Not only is it a big step up from the Nintendo Switch version that I’ve played more than other consoles by now, but also much better than I expected. It isn’t running at native resolution but it looks great overall. From the footage I’ve seen from the iPad Pro 2021 with the M1 chip, the 2020 Pro isn’t a massive downgrade like I expected. Beyond just the textures and models, panning and zooming is smooth and the frame rate holds up very well in more busy moments. The load times are also a lot better than on consoles. One thing to keep in mind is the iPad does get hot after an extended session. It doesn’t get as bad as when playing The Pathless though for me. I did notice some slowdown when playing online with a friend who was playing on Steam though. It wasn’t too bad but it was noticeable.

One of the standout aspects of Divinity: Original Sin 2 is the audio. While it obviously has a ton of voice acting and I had read about this a few times before experiencing definitive edition on console for the first time, I was still surprised by just how much of the dialogue is voiced. In addition to the voice acting, Borislav Slavov’s soundtrack is fantastic and full of memorable tunes. It is a regular fixture in my work music playlist alongside FTL, Risk of Rain, and Bloodborne. Usually, I’d be saying I hope for a vinyl soundtrack release but Divinity: Original Sin 2’ss score has already received a vinyl release which is always something I appreciate. If you decide to skip Divinity: Original Sin 2 for any reason, I hope you consider listening to the soundtrack at least. 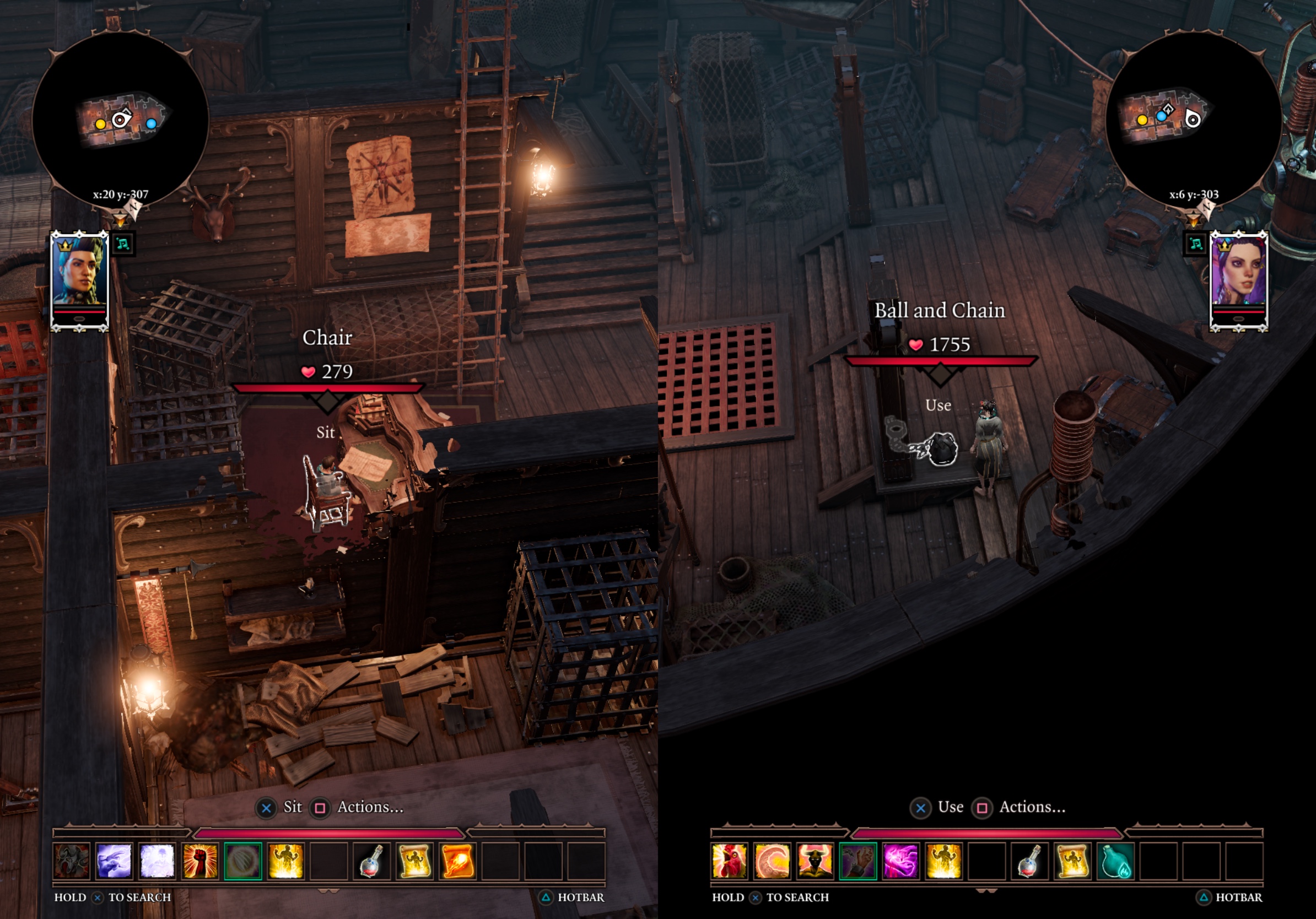 I’ve praised Divinity: Original Sin 2 a lot and while I do appreciate the support for cross platform online play across Windows and macOS, the lack of proper Steam cloud save sync (and even GOG syncing) is very disappointing. The workaround involves using iTunes file sharing and I hate doing that. I was hoping the progress sync would be like Thronebreaker or other games where you’d just login to your account and grant access to save files and the game syncs when you try to load up a save. Having Steam syncing like the Nintendo Switch version would make Divinity: Original Sin 2 on iPad the best version of the game for me and a perfect companion to the PC version. Right now, the Nintendo Switch version still has that over the iPad version. For everything else, Divinity: Original Sin 2 on iPad is everything I wanted.

Hopefully future updates can address a few of the minor complaints I have and also bring in full save syncing with the Steam and GOG versions. Despite the issues, Divinity: Original Sin 2 on iPad costs half of the other platforms at $24.99 and is absolutely worth it at the asking price. It has yet to drop below $34.99 on Nintendo Switch and below $23.99 on PlayStation 4. We are all used to iOS and iPadOS games costing less than other platforms for the most part but Divinity: Original Sin 2 being priced at $24.99 while being feature complete with other platforms and offering more control options is pretty mindblowing. This definitely is a much better launch and deal than when Civilization VI hit iPad and comes in the same tier as when the awesome Feral Interactive bring a new game to iPad and iPhone like with XCOM 2. 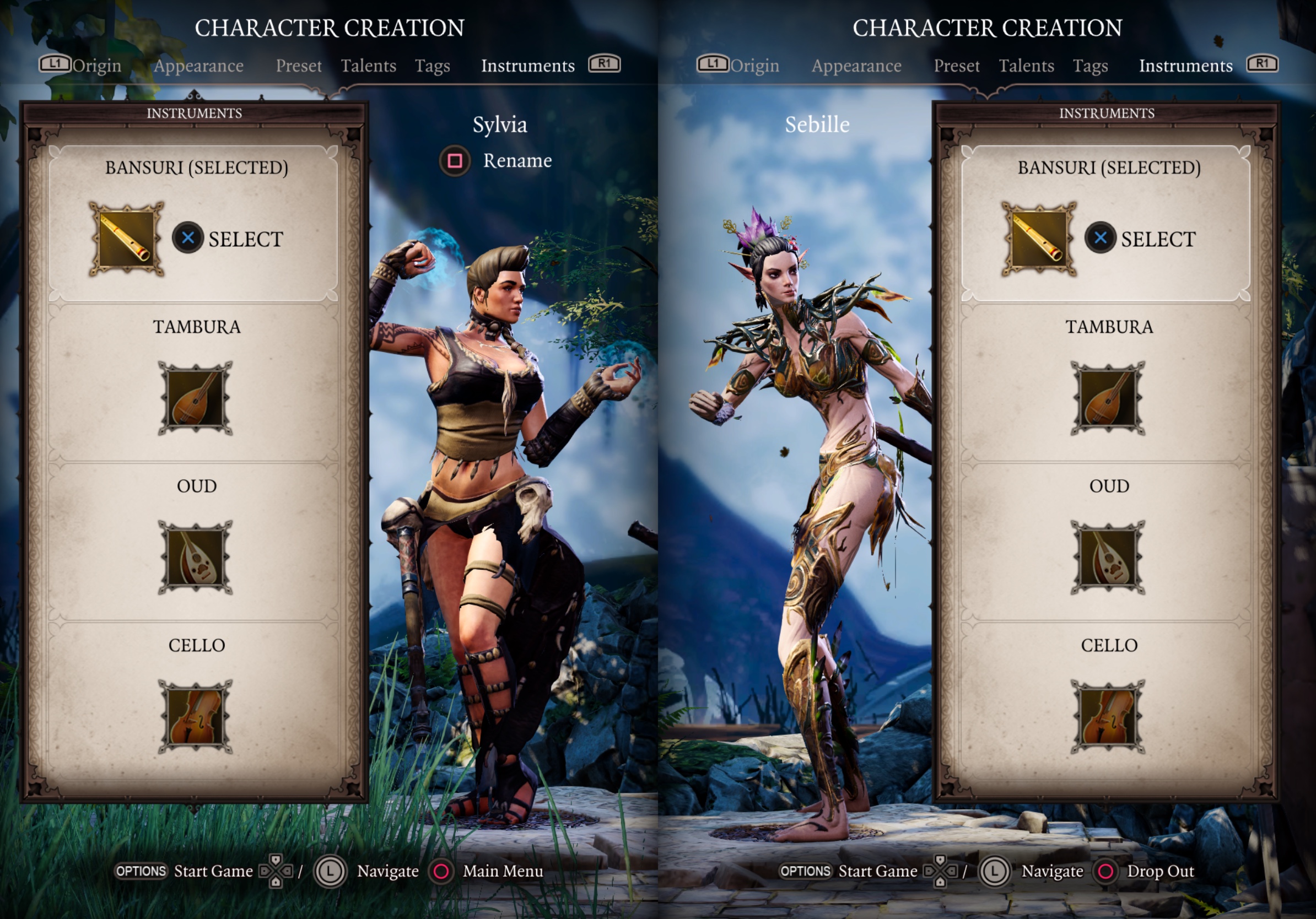