Originally released on the Mac, PC, and Linux machines in late 2012, FTL: Faster Than Light ($9.99) has seen more positive reviews and won more awards than I can even reasonably list. Rocking a solid 86 on Metacritic, FTL has already proven itself to be a great game. If you missed all the buzz the first time around, here’s the gist-

The premise surrounds around you being in control of a ship from the Galactic Federation, carrying vital data, and running from the rebel fleet who are on your tail. The game ends when you get the data to the Federation HQ, but of course, that’s significantly easier said than done. Getting there in one piece involved seemingly endless combat situations with hostile ships, trading space scrap for new weapons, crew members, and ship upgrades, deciding when to use diplomacy and when to fire up your weapons and much, much more. 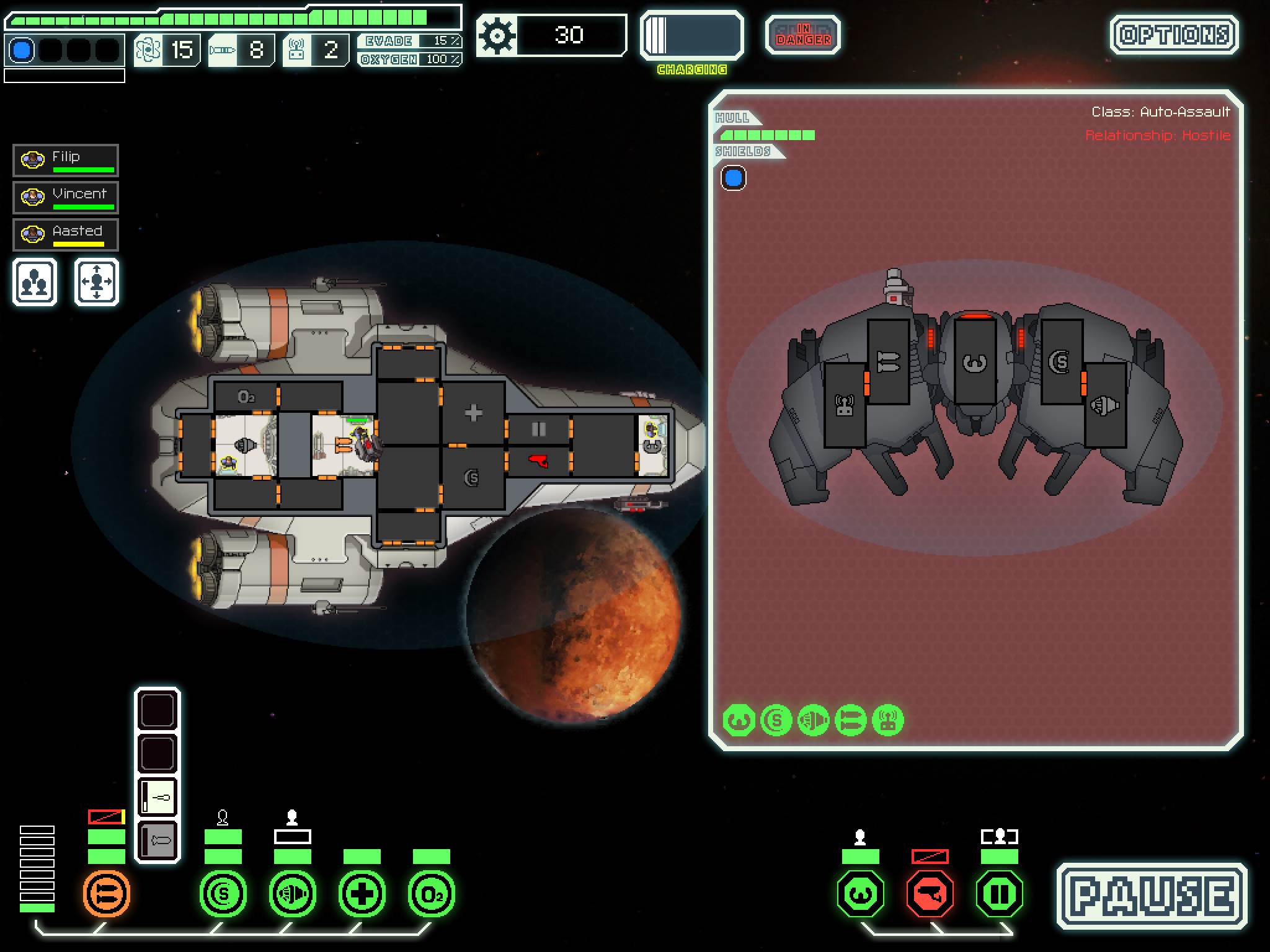 The depth of the game is incredible, and while jumping from point to point as your FTL drive spools up can feel slow paced, when the you-know-what hits the fan, FTL gets insanely hectic. Your ship has several core systems ranging from its engine, the shields, weapons array, door controls, sensors, and more. In a fight, enemies can (and will) end up disabling systems, making things exponentially more crazy.

For instance, when you take damage and parts of your ship catch fire, it seems the best way to take care of it is tricky airlock management to vent oxygen from those areas out in to space and in the process, put out the fires. Closing the doors again re-pressurizes those areas, the fire is gone, and you’re good to go. If you lose your sensors and you’ve got a fire onboard, you won’t be able to see where the fire is in any room that a crew member is. If you lose both doors and sensors, well, you’re really in trouble.

Managing these kind of problems is what FTL is all about, there’s so many neat interactions and way you can approach problems that I feel like I’m still discovering new things years after the first time I played it on the PC. At the end of the day, FTL is a game of putting out both literal and figurative fires, avoiding the rebels, and seeing how far you can go. You won’t beat the game on your first try, and probably won’t get much farther on the tenth time. Strategic iteration, unlocking new ships, and discovering new tricks is the core of the game.

Additionally, if you already played a ton of FTL on the PC, the iPad version also includes all the new “Advanced Edition" content which can be toggled on and off. This new content pack can basically be summed up as “more of everything." New ships, new events, new equipment, new ship features, and more.

With that all being said, and with a ton of PC FTL under my belt, I can say with complete confidence that FTL for the iPad is the definitive version of the game. The touch controls are great, and arguably feel more intuitive than playing the original release with a mouse and keyboard. Things that make sense to tap to select (like selecting crew members or directing them around) you control via tapping, and everything else is done via clever swiping gestures. It’s all really, really well done.

FTL is also the perfect “play while you do something else" game. My best play sessions were playing on my laptop while half paying attention to a baseball game, or something similar. The game is super conducive to being paused, in fact, a lot of things are best done while paused as you can redo weapon configurations, issue orders, and everything else when the action is stopped. It’s a weird way to complement a game, but I’m sure you guys all also play iPad games the same way- Chilling on the couch with the TV on. FTL fits flawlessly in with that.

In a way, it feels like games like Star Command ($2.99) and Out There ($4.99) were merely placeholders for the incredible FTL. With FTL here now, it’s going to be really hard to top this totally random spaceship management combat simulation strategy game. A lot like Out There, one of the only negative things that you can say about FTL is it feels like sometimes you’re depending a little too much on the randomization giving you a space station to re-supply or other resources you need… But, that’s just sort of how these games work so I’m not sure how big of a deal that is.

If you’ve got an iPad and have found yourself even remotely interested in games like Out There or Star Command, you need FTL. Additionally, if you’ve played the PC version it’s still beyond worth picking up the iPad version as it has translated to the touchscreen even better than my most optimistic expectations.