While the TouchArcade staff attempt to draw attention to what we perceive as the most noteworthy titles in our Game of the Week feature, the sheer quantity of releases mean that often our views contrast greatly against those of the awesome mobile gaming community that resides on our forums. Although there is occasionally a common ground reached – such as Crashlands being both the forums’ Game of the Year, as well as the official TouchArcade award winner – this isn’t always the case, and the excellent Game of the Week and Game of the Month voting polls, which are organised entirely by members of our community, allow readers to have their own say on what releases really resonated with them. Thanks to the hard work of long-time community legend Andy C83, and his efforts in relaunching the awards series for 2017, we have our first official TouchArcade Forums’ Game of the Month for January – congratulations Red’s Kingdom ($2.99)! 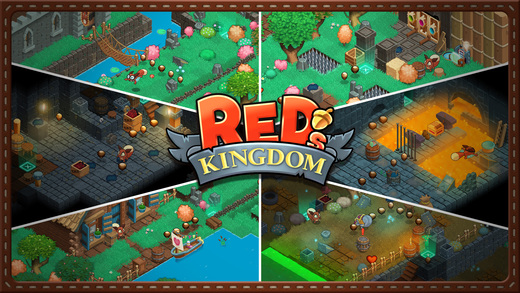 After an extensive nomination period, ten games distinguished themselves from the rest of the competition, with three of these titles ultimately fighting it out for the Game of the Month accolade. Dandy Dungeon (Free), which recently received a glowing five star review from the ruler of all things role-playing Shaun Musgrave, came in a respectable third place with 14.04% of the votes. Although it was leading for the vast majority of the competition, The Binding of Isaac: Rebirth ($14.99) from Nicalis won the silver medal for January 2017, earning exactly a third of the ballot. Red’s Kingdom, after a late surge, ran away with 42.11% of the vote, and marks an early synergy with the official TouchArcade consensus as the eccentric puzzle title was deservedly awarded our Game of the Week award when it first launched. While its interesting open-world take on the ‘slide-until-you-hit-a-wall’ puzzles was somewhat divisive – I certainly have troubling memories of the mechanics in games such as The Legend of Zelda: Twilight Princess – the game’s abundant charm, beautiful graphical style, and dynamically varied challenges make Red’s Kingdom a worthy winner of the first TouchArcade Forums’ Game of the Month for 2017.

As always, a massive thank you to Andy C83 for taking the time to organise such a well-run vote out of his own volition, as well as to everyone who took part in the Game of the Month thread. However, we need your help to keep this competition going as a permanent feature. From now on, each Game of the Month vote will take place during the first iOS release week of month – the next poll will start on the 6th March, for example – but the titles that will be eligible to run for this prestigious award will consist of the most successful releases from the separate Game of the Week ballots that take place on the General Game Discussion forum. If you have a particular favorite from a week’s releases that you believe may not be entirely represented by the typical TouchArcade coverage, be sure to head down to the Game of the Week threads, vote for a title, and most importantly tell us why this particular game has won a place on your iPhone. Who knows, if your favorite does go on to win the overall Game of the Month, you could be featured on the next iteration of this article, and achieve eternal fame and glory amongst your mobile gaming friends. Congratulations again to Red’s Kingdom for kicking off a strong 2017 for the App Store with the first TouchArcade Forums’ Game of the Month; keep an eye on our forums to see who may triumph in February!