At this point in iOS’s life, it’s getting hard to find a new spin on the whole roguelite genre. Most of the people reading this probably own at least twice as many as they’ve had time to play. I suppose my job here is to try to convince you that you ought to add Dandy Dungeon (Free) to that pile, because you really should. It’s bizarre in all the most likable possible ways, and while its basic mechanics are familiar, the way it presents them is definitely unique. If the general theme of, say, Katamari Damacy appealed to you, this is a game you’ll want to check out.

Yamada is a 36-year old man who works at a software company. He doesn’t care much about his job, and instead wants to focus his efforts on his true passion of creating a game. The general flow of the game sees Yamada coding up some new element for his game, then having you test the game by playing it. His game is a sort of roguelite dungeon crawl with an interesting twist. On each floor, you have to draw a path for the hero to move along, leading all the way to the exit. He’ll fight any enemies he bumps into along the way, collect any treasures, and spring any traps. Once he’s in motion, you can support him by using a variety of equipped items. As the hero defeats enemies, he’ll level up, improving his stats and topping off his HP. Each time you play the game, the hero starts from level one, but any equipment you find is yours to keep. 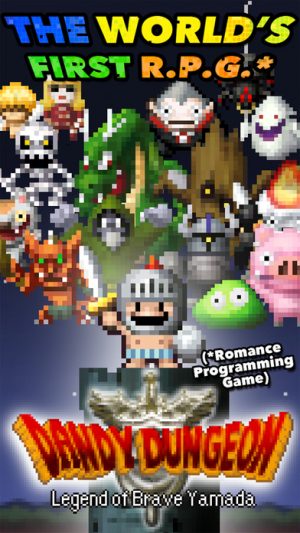 Successfully clearing a dungeon will give Yamada some experience points. When he levels up, he’ll often code some new features for you to try. He will also have a steady stream of visitors who either push the story along or offer some other kind of benefit. The cast is largely made of quirky characters, save perhaps for Yamada’s new neighbor, the 18-year old Maria, who appears to be a fairly normal schoolgirl. Yamada falls for her at first sight, and much of the game centers around his misguided attempts to prove his love to her. That could have come off as a little creepy, but the game knows exactly what it’s doing and parodies it appropriately.

These are the two sides of Dandy Dungeon. On the one hand, a fun, casual roguelite with tons of things to collect, level up, and unlock. On the other, this strange tale of Yamada and the many odd characters that touch his life. I can’t decide which part I like better. The roguelite portion has a lot of depth hidden behind its simplicity, and it always feels good when you figure out a line that takes you through every square on the floor. That said, Yamada’s world outside of the game is irresistibly charming, almost effortlessly making you root for this screwy loser and his seemingly fruitless quest. The way these two aspects bleed into each other is extremely satisfying, too. Just to use an early example, after Yamada gets a visit from one of his mooching neighbors, he adds a side-game where you play as a representation of that neighbor on the hunt for food and fortune. 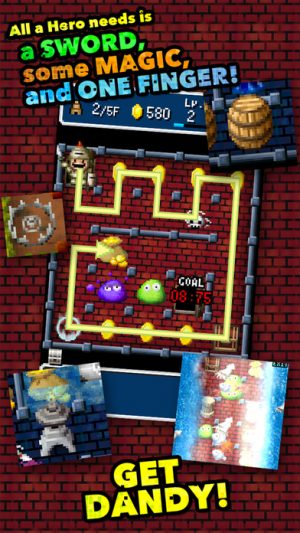 It certainly doesn’t hurt that Dandy Dungeon has one of the funniest localizations I’ve seen in a mobile game in a while. The original Japanese version was hilarious in its own right, but the humor was so culturally specific in places that it couldn’t have been easy to localize. Just as the goofy descriptions in Katamari Damacy made you want to hunt down everything, you’ll surely want to track down all the goodies in Dandy Dungeon to see the accompanying text. Of course, even with the shift in language, the game is still quite identifiable as the work of Yoshiro Kimura, the off-beat developer most famous for games like Little King’s Story, Chulip, and Moon: Remix RPG Adventure. A frequent theme in Kimura’s work is the notion that love can conquer just about any problem, and that’s certainly on display in this game.

The game’s presentation is fantastic all-around, really. The detailed pixel art fits the theme of the game like a glove. Yamada’s room is a veritable treasure trove of things to catch your eye, and the main character’s animations are hilarious to watch, as well. The sound effects and basic compositions push the nostalgia buttons the way you would probably expect them to, but quite a bit of the music is accompanied by vocals, like a goofy friend is sitting in the room beside you making up lyrics on the fly. Dandy Dungeon feels simultaneously like a throw-back and something that couldn’t possibly have existed in previous eras, a wonderful little trick if there ever was one. 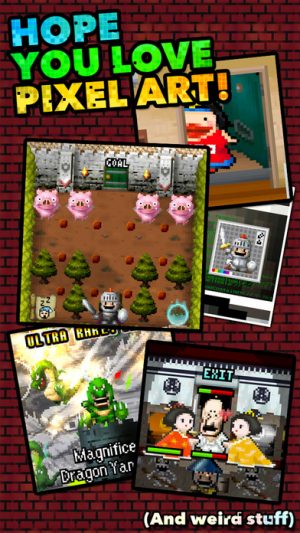 But this is a free game, so you’re probably wondering what the catch is. Well, it’s structured a little like a social RPG. Playing a dungeon uses up some of Yamada’s stamina, and when it runs out, well, you know how these things go. Similarly, if you die in a dungeon, you can either use an item to continue or give up all the experience and gold you’ve scooped up in that run. That item, the rice ball, can occasionally be found for free, but the only ready supply of them is through IAPs. There are also inventory limits, which can be an issue as you try to collect all of the bits and bobs you need to upgrade your gear.

Unlike most games that use these sorts of monetization techniques, however, Dandy Dungeon gives you the option to buy out of the most of them. For example, buy the Duck IAP for $7.99 and you’ll never have to worry about stamina ever again. Grab an extra 100 storage slots for another $7.99 and you won’t soon run into inventory limits. If you want to make things even easier, you can grab the fourth-dimensional dog Pako for $7.99 and marvel at no longer needing to worry about juggling the small handful of items you can bring on a dungeon run. I’d say the Duck is a must-have for anyone who wants to really get into the game, but you can certainly get a strong sense of what the game has to offer before you’ll feel the need for even that item.

I kind of fell in love with Dandy Dungeon, and I think a lot of you will, too. It’s a great example of how the wrapping around a game’s mechanics can elevate something good into being something truly great. Like any roguelite, you’re in for a lot of repetition over the long haul, but the ever-evolving world outside of the game keeps it from feeling stale. It’s genuinely funny, strangely heart-felt, and a tremendously enjoyable game on the whole. You’ve got nothing to lose by giving this lovable loser a chance.