Unfortunately, we live in a world where games can come and go on a whim, and it feels like at least once every week there’s some popular game that’s getting pulled from the App Store and going permanently offline. However, if there’s one brand that’s got a bigger graveyard than them all it’s the Star Wars brand. Lots of excellent and not-so-excellent Star Wars games have been euthenized over the years, like Tiny Death Star, Star Wars: Galactic Defense, Star Wars: Assault Team, Star Wars Arcade: Falcon Gunner, Star Wars: Trench Run, and I’m sure many more that I’m forgetting. The point is: Star Wars giveth, and Star Wars taketh away. The latest Star Wars game to get blown to bits like Alderaan is the fantastic action platformer Star Wars Rebels: Recon Missions. The game has officially been pulled from the App Store, and upon starting up the game you’ll be greeted with the following message: 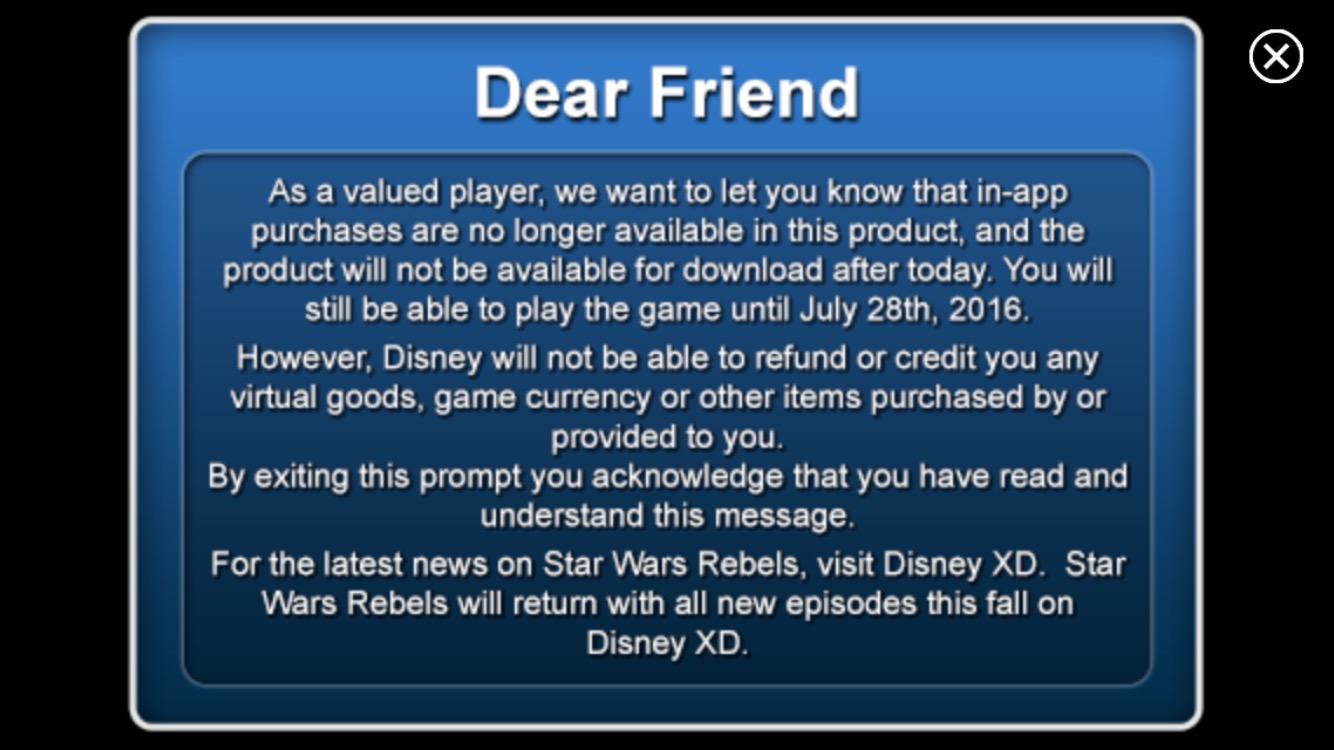 Yes, “Dear ‘friend’ we are murdering this game you love, have a nice day! P.S. No refunds!" It’s a shame because Star Wars Rebels: Recon Missions was a seriously great game, and was a great piece of fan service for those who were invested in the popular animated show Star Wars Rebels. Heck, even if you weren’t into the show, it was still a great game in its own right. Also it used a pretty cool pay model where the game was free to download and sort-of-free-to-play, but you could buy several types of IAP that would “premium" up the experience for you. It truly was a best of both worlds type of scenario, but now it’s all gone. The only silver lining here is that Star Wars Rebels: Recon Missions is still available in your Purchase History for now, so if it’s just been sitting in your backlog all this time you still have about a month to download it again and play through it. Also the IAP are still restorable if you bought them previously, but no new in-app purchases can be made.

I wish I could say this is a new problem, but unfortunately it’s been close to a decade since the all-digital world of the App Store arrived, and situations like this are sure to continue happening. My best advice is to play the games you buy when you buy them so that if they are uncerimoniously yanked out from under you at least you’ll have the memories of the good times you shared.