Are you ready to stand up against the Empire and join the rebels? Become a galactic hero in Star Wars Rebels: Recon Missions (Free); a full paced action platformer based on the new Star Wars Rebels animated series which is set 5 years before Episode IV of the movie franchise. Blasters, light sabers, mines and vehicles in a side scrolling platform action adventure… there’s finally a Star Wars game on the app store worth savoring.

It’s an exciting time in the Star Wars universe, these are the dark times; the Jedi’s have fallen and the empire is wrecking havoc and hunting down the last of the Jedi. The sound effects, music and the atmosphere take us closer to the Star Wars we love. It’s just the thing to fill the gap while we wait for J. J. Abrams to finish up “The Force Awakens” later in the year. True fans now have a new iOS game to play based on the Disney XD series and it’s phenomenal. 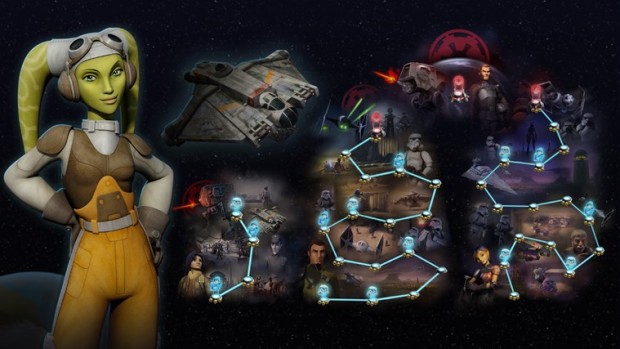 There have been a lot of Star Wars titles released on IOS over the years and lets be honest not all of them have been amazing. Disney Interactive and indie developer Gigataur, who have had the fortunate success of working with the largest entertainment companies in the world including Marvel and Mattel, have collaborated on Star Wars Rebels: Recon Missions. The game is big budget and top quality! The graphics, which are metal optimized for IOS, are gorgeous and the game play is furious and well paced. The platformer is like no other, and the world is realistic with powerful visual effects giving players a life like and rare Star Wars Rebels experience.

You join a group of rebels who have come together to fight against the Empire and save the citizens of Lothal. You start out the game as Ezra, with a blaster for a weapon. The controls are smart and easy to use; there’s a one speed run, jump, double jump to get those hard to reach objects, and a ‘hold and drag’ virtual joystick which you use to aim at enemies, alarms, droids, fight your way past hordes of Imperial enemies, dodge TIE fighters, blast storm troopers, and drive an Imperial AT-MP walker, the highlight of the 3rd free level. The short movie clips in between levels are also excellent, and help draw you into the story, explaining the missions ahead with voice overs and animated action from the TV show.

To maximize how well you do try practicing firing while moving and jumping, it’s a little tricky to master but once you get your fingers trained you’ll be able to easily avoid blaster fire and enemies while taking them out. Most games like this require you to hit the fire button continually, but this one has auto fire enabled so you can concentrate on your aim. Blaster fire also ricochets off platforms which can be really handy for hard to reach enemies. Make sure you don’t move too fast through the levels, if you find yourself ahead of an enemy then destroying them involves changing direction; which makes shooting really difficult and you can find yourself loosing energy really quickly if you’re surrounded. The mines are also a lot of fun to use and master, which come in really handy in later levels. Another cool feature is infinite ammo, you can fire and wield your light saber forever without running out, so it pays to keep firing most of the time ahead of you to clear the way as you go. Also keep a look out for alarms; leaving them functional brings endless enemies your way.

The free to play game initially gives you 4 levels to get you trained up, and then you can unlock 31 more levels with 50+ unique challenges behind a pay wall. The bulk of the game is locked behind this purchase, including additional missions and grueling boss battles. After playing through I can confirm it’s worth the US$4.99 to unlock. This bundle also unlocks two more characters for play: Kanan Jarrus and Sabine Wren who are clearly the greats of the show. If you’re not willing to delve into the full unlock there are 2 half packs, the Jedi and Mansalorian packs, for about half the price which unlock 15 levels each. The levels past the pay wall are brilliant and full of amazing content. The fight against the TIE fighter (below) is a major highlight not to be missed. You also don’t get into the true Jedi Light Saber fighting until you get past the pay wall. That said, the first 4 levels are still worth playing just on their own, there is a good hour or so of trooper blasting, walker driving entertainment to get you hooked. There are also some cool free training challenges, you can find with the character Kanan next to the ship in the sanctuary, if you want to try out the light saber and mines before unlocking all the levels.

The developers have been really careful to make it clear that Star Wars Rebels: Recon Missions holds IAPs, it is stated in the App Store description multiple times and there is a warning screen on first start up which cautions parents and allows them to turn off the IAPs which I thought was really responsible in this age of IAP excess.

The other side to Star Wars Rebels: Recon Missions is the building of your rebel haven. I know, it sounds like a typical freemium game where you earn coins to build homes; but this one is a bit different and the IAPs are not overly intrusive. In each level you collect Hope Emblems, the game’s main currency, while you work at collecting three gold medals scattered in each stage. These medals give you additional collection goals. In between missions, you return to the Rebel Haven, which can be customized with shelters, towers, generators, satellite dishes, a droid factory and more. The more shelters you build and decorate, the more citizens you can save from the Empire. Saving people gives you a chance to unlock new abilities like upgraded weapons, and other levels and goods. It adds another layer to the game, but to be honest I found it to be an unwanted distraction from the main platformer action, and often requires you to complete dull tasks to unlock levels and other features. It feels like 2 games stuck together to try to jam some more IAPs in there. From a revenue generating perspective I guess it makes sense, it adds a level of replay value to the game, and a purpose to collect currency during game play. 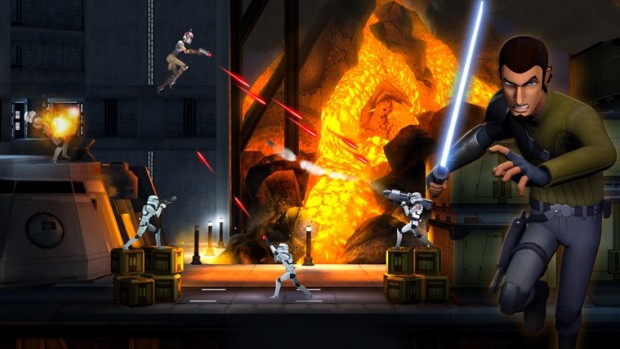 The IAPs, other than unlocking the level pay wall, consist mainly of boosts to help you in the action levels, giving you the ability to double the amount of Hope you gather, or extra light saber abilities; like block which makes a huge difference. It’s basically a premium title that lets you try it out for free; a formula which I personally like over the typical freemium model. There’s no timers, or annoying ads within either to restrict game play. Expect to pay around $8 if you want to get the most out of game. It’s worth unlocking all the levels and grabbing at least 1 of the boosts to help you through.

There are many elements from some of my favorite Star Wars games of all time like Knights of the Old Republic, The Force Unleashed and Jedi Academy, the architecture of the buildings and the design of the game elements, environments and soundtrack holds true to the franchise, but don’t be mislead this is a IOS platformer and controls and abilities have been simplified to improve ease of play. The light saber wields in quite a crude way compared to most other Star Wars games, and your chance to wield force powers like push, pull and lightning are few and far between; but these kind of elements do show up in enemies later in the game. As a platformer for IOS the game play is pretty smart and I found the controls easy to use. The only thing I’d change is the intro, which you have to skip through every time you start up the app; otherwise it’s a great experience.

I originally intended to devote about an hour to Star Wars Rebels: Recon Missions to try the game out but ended up playing it right through with only a few levels to go. It’s such an amazing game, one of the best platformers I’ve played. I really enjoyed it and it’s absolutely worth a look. If you’re a fellow Star Wars fan, search your feelings you know it to be true, is there ever really a bad time to indulge in games paying homage to that galaxy far, far away?