The iOS platform is a haven of great (and some not-so-great) ports of classic games. Square Enix has made a big business out of porting their older catalog to iOS alongside some of their original mobile titles, and their most recent example of this is an excellent port of the 2008 Nintendo DS remake of the 2002 PlayStation remake of the original 1990 RPG classic Dragon Quest IV. You following so far? Dragon Quest IV on iOS uses the same pseudo 2D/3D visuals of the Nintendo DS version, formatted in portrait orientation for one-handed gaming, and including some extra content that wasn’t in the original NES release. It’s an incredible game and an incredible port on iOS, capturing both a 5 star review and our Game of the Week nod.

However, over in the game’s forum thread, one of our community members had a question for our resident RPG expert Shaun “Must Read" Musgrave. Forum goer Louis Ace asked, “Shaun, how would you compare this to the Final Fantasy games on the App Store? What are the similarities and differences?" Given Shaun’s lengthy, well thought out and interesting response, I thought I’d share it with you here on the front page, in case you’re yourself wondering which series of iOS ports would be more your style: Final Fantasy or Dragon Quest? Of course, there are far more Final Fantasy games on iOS than there currently are Dragon Quest games, but if the rumors from last fall are to be believed, it won’t be long until the first eight Dragon Quest games are all available on the App Store.

So, without further ado, here is Shaun’s response to the questions:

“…how would you compare this to the Final Fantasy games on the App Store? What are the similarities and differences?"

The first thing I want to say is that there is a key difference that separates Dragon Quest and Final Fantasy as we know them today. Final Fantasy is and to an extent always has been a name and a few core concepts that were used by a number of teams to explore different RPG ideas. Apart from certain mainstays who even now have largely departed such as Yoshitaka Amano and Nobuo Uematsu, the games usually had very different staff from installment to installment, and there was no real auteur to the series. FF long outlived creator Hironobu Sakaguchi’s tenure at Square, and indeed there aren’t many people at all from the old days still working on the series. 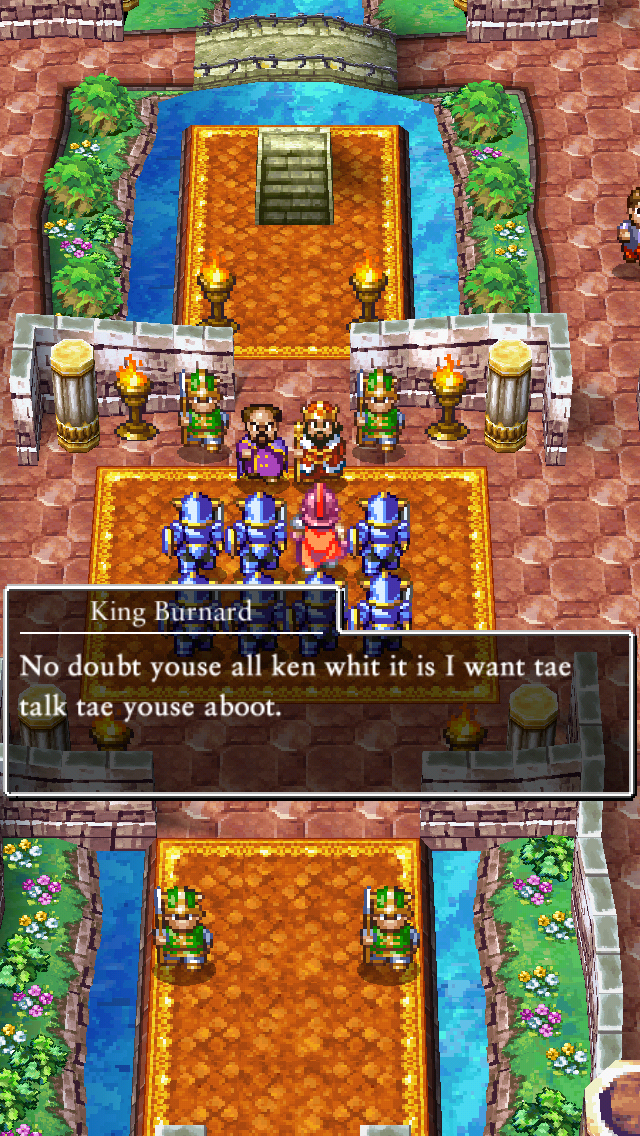 Dragon Quest, on the other hand, is the vision of one man, Yuji Horii. He always collaborates with artist Akira Toriyama and the music always has been at least under the supervision of Koichi Sugiyama. Those three work with various programming houses (Chunsoft, Heartbeat, and Level 5 so far) to create the games, but they very much reflect the vision of Horii, lending them a very interconnected feel.

This is important because fundamentally, the Dragon Quest series iterates, eternally perfecting its established gameplay, while FF innovates, often throwing out nearly everything to try something totally new, without care of refinement. It makes the series harder to compare than you would think, especially once we get past the first few games where FF was mostly existing as a reply to DQ games.

Dragon Quest IV is a weird era-straddling game. It came out quite late, in February 1990, with the Super Famicom less than a year away. It released around the same time as Square’s Final Fantasy 3, which had an unenviable job of trying to clean up after FF2‘s mess and establish some sort of stable relevance for the series. I like to think that at this point, even though FF was relatively minor compared to DQ, that Horii *was* paying attention to what it did well, but that’s just speculation.

The chronology looks like this: DQ1 → DQ2/FF1 → DQ3 → FF2 → FF3/DQ4, and I think that works for most of the comparisons. DQ1 is very primitive, DQ2 added party members and extra means of travel, FF1 had some similar ideas and threw in a bunch of crib notes (and sketches) from DnD, DQ3 introduced a class sytem and implemented it in a more sophisticated way than FF1 did, FF2 came out with a tight story focus and introduced gamers to Akitoshi Kawazu’s madness, FF3 came out with a more back-to-basics approach that seemed heavily informed by DQ3, and then there was DQ4. 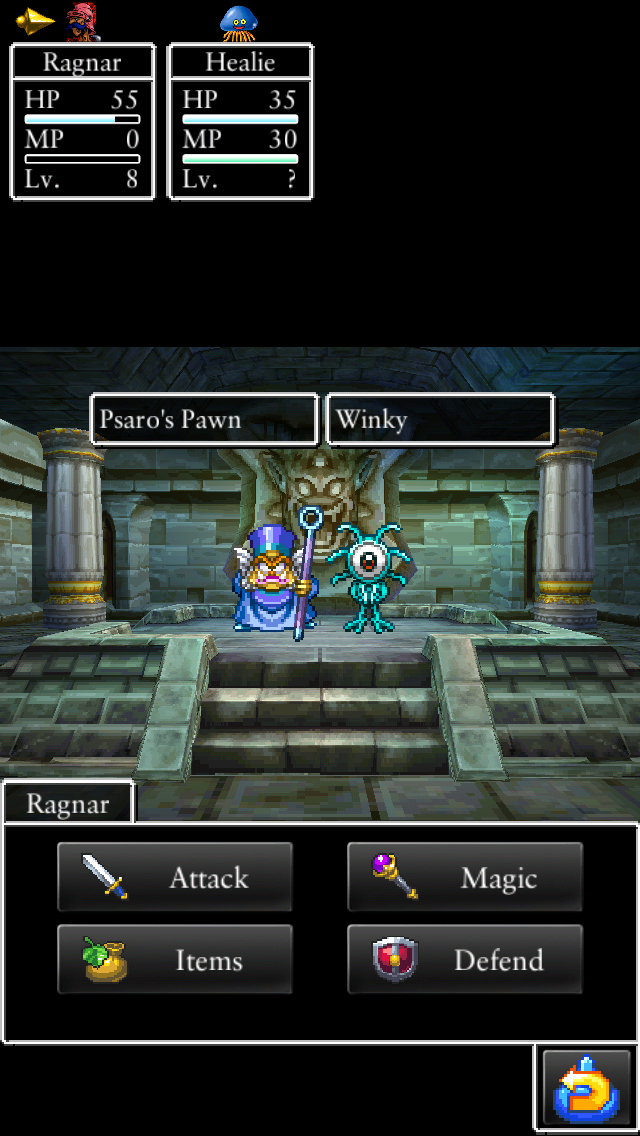 DQ4 wasn’t the first time DQ had “named" heroes, but it was definitely the most advanced attempt at such a thing. Tossing out the ability to change jobs and choose the job types you wanted for your party was pretty bold and seemed to fly in the face of what job classes were supposed to do. Instead, the story dictates which types of characters you have at your disposal at any one time, only allowing you to customize in the back half of the game. Interestingly, even later DQ games that brought back the class system tend not to introduce it until you’re quite deep into the game, so this isn’t the last we’d see of this approach, technically.

From a technical point of view, this allowed the team a lot of opportunities for balancing, but more importantly, having a large cast of named characters allowed them to tell an even better story than the already impressive efforts in the Loto Trilogy (the first three Dragon Quest games). It put characters first, even going as far as implementing AI so that they could have their own personalities in combat. This was also the first DQ game with a full casino, a wagon (being able to switch your party members around on the fly? WHAT?!), saving in churches instead of by talking to kings, and more stuff that stayed in the series forever. It’s a far more sophisticated game than FF1/2/3, and the only thing that belied its 8-bit roots in my opinion was the appearance.

The remake solves that, of course, and I think people coming to the series today would be hard-pressed to tell DQ4 is from a different hardware generation than 5 and 6. Even in fully-remade 3D, it’s still very apparent that FF3 is a NES/FC game, as an example, but DQ4 avoids that to a great extent. It has a greater focus on exploration than the FF games of the SFC era, but that’s a general difference between FF and DQ outside of specific games. I think it’s pretty unusual for a DQ game simply because the series isn’t known for revolving the story around the player characters, but this one does.

If I’m going to go LIST WARZ on you, here’s how I’d personally rank the DQ/FF games available to English iOS gamers right now, not including genre-jumping spin-offs:

As more DQ games get released, you’re going to see those FF games from Dimensions on down get pushed down that list more, with DQ5 being notable as being the one DQ game that has the story chops to best FF6 and DQ3 being the DQ game with the customization to challenge (but ultimately lose to) FF5. But generally speaking – if you like stories more, stick to FF, if you like exploring and adventures more, DQ’s your buddy.

Thanks Shaun! And for reference, here are the appropriate forum and review links for all games involved: