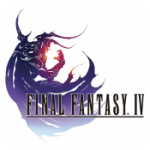 I credit Square Enix’s Final Fantasy IV as being the first game to really make me see the wonders of the role-playing genre. Just as FF4 ushered in the golden age of 16-bit RPGs on the SNES, it also began an interest in me that continues to this day. Thus, one could imagine my excitement when we found out a few works ago that Square Enix would be porting over the DS version of Final Fantasy IV to iOS. Just as was the case with Final Fantasy III ($11.99) when it debuted in 2011, FF IV ($14.99) for iOS should be considered the definitive version of a classic title and is a must-have for any RPG aficionados.

Following the trials and tribulations of the Dark Knight Cecil, Final Fantasy IV is the first game of the series heavily driven by narrative. The story is also pretty engaging (for its time) with themes of genocide, betrayal, atonement and sacrifice, along with a few twists. While the game does offer the opportunity to deviate from the storied path set before you with side quests and optional dungeons, those adventures are few and far between. Still, I’m a huge fan of the epic tale weaved in Final Fantasy IV and I’m glad to see it stand the test of time and succeed even on iOS. 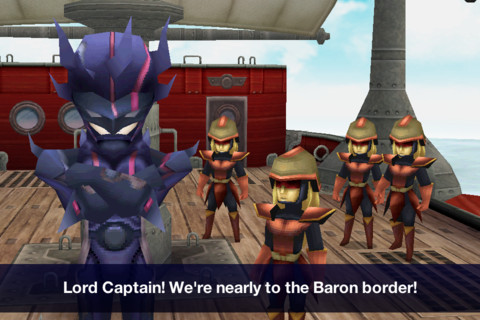 Meanwhile, FFIV employs the same, classic turn-based random battle that has been a staple of the series. Rather than the customizable job-based system found in FFIII, each character in FFIV has a pre-defined class that can’t be modified. However, characters that come and go from your party can impart augments, items that can bestow that particular character’s special ability to another character. While this offers some ability to customize, the augment system in general is rather unnecessary and feels tacked on (which it is, considering augments didn’t exist in the original SNES version).

Similar to the iOS port of Final Fantasy III, FFIV enjoys a number of improvements over its DS predecessor. For starters, the visuals are nicely improved, taking advantage of the higher graphical and processing prowess of iOS devices. The music has also been upgraded, with each remixed song of the classic Nobuo Uematsu soundtrack sounding exquisite. The difficulty has also been tweaked, with two difficulty modes available (a pretty unique addition for classic FF games). I’m particularly pleased with the changes to difficulty, as the game seems to require less grinding than previous versions. This change goes hand-in-hand with the ability to auto-map dungeons, a feature sorely missing from the original and a welcome addition to this version. 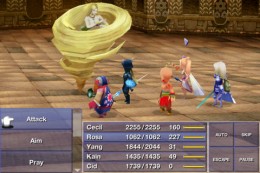 In addition, FFIV also employs the same touch-based revamp of the menu system found in FFIII, allowing for much easier touch-based navigation. Despite these improvements, menu navigation can still be a bit cumbersome, especially during battles with characters that have a large amount of spells. Still, the inclusion of an ‘Auto-battle’ mode (along with some simple command customization) alleviates most of the annoyance.

While we’ve mostly focused on what has and hasn’t changed in this port, what’s more important is the simple fact that Final Fantasy IV is still an amazing game to play. The overall story, character development and pacing are excellent. The modifications to the core gameplay, whether they were changed from the US SNES version to the DS version or created exclusively for the iOS port, make the game more accessible to a wider audience. While the 3D visuals don’t illicit the same feel as the original sprites of the SNES version, they still do a great job preserving the look and feel of the overarching tale (iffy voice acting notwithstanding). With so many RPGs feeling unfinished or superficial on iOS it’s nice to actually play one that hits all the notes and demonstrates why it was, and still is, a classic. Sure, there’s a lot of nostalgia in play here, but there’s a reason why Final Fantasy IV is so memorable. I’d suggest checking it out to see why.