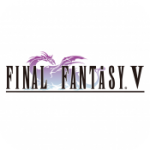 While most fans of Square Enix should be rightfully concerned with some of the recent Final Fantasy mobile offerings, one area competently executed are their ports of preexisting console FF offerings. Final Fantasy V ($14.99), the latest port to grace iOS, thankfully continues the trend of offering improved versions of the classic RPG series. Offering one of the better implementations of the main series’ job system, FFV is a great game in its own right, successfully makes the transition to iOS and should be added to the collection of any nostalgic RPG collector.

Originally released in 1992, Final Fantasy V wouldn’t grace the US until its inclusion in the PSX Fantasy Fantasy Anthology in 1999 (and wouldn’t see a mobile release until the 2006 GBA Version). It’s a shame that US FF fans had to wait so long, because Final Fantasy V was a pretty good entry in the series. The overall story, which centered on a sealed evil looking to destroy the elemental crystals holding its bond in place, features a lot of themes and character development that would be utilized in later entries in the series. 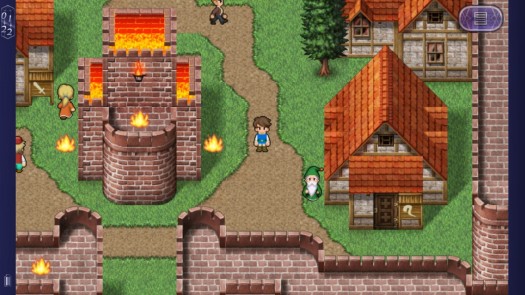 There’re a lot of folks that have probably played FFV in some previous iteration and are wondering what the differences are between this iOS version and previous ones. Content-wise, FFV for iOS features the same additions as found in the GBA version. This means that players will find an additional end-game dungeon as well as four extra job classes that weren’t in the original. While the additional content is purely optional, the additional job classes add some variety for players that haven’t experienced the GBA remake.

The one area that does change significantly in this iOS port is the art style. Instead of using the classic, highly pixelated models of the original, FFV on iOS has a very smoothed art style, with the game looking closer to the recently released Final Fantasy Dimensions. In addition, the game features more artwork from original artist Yoshitaka Amano at a much higher resolution than previous versions. While I welcome the additional Amano art, I’m on the fence about the rest of the visual improvements. There’s a lot of nostalgia and charm lost in the move away from the pixel graphics and the current look feels a little bland.

The rest of the additions, meanwhile, are positive in my book. The music, which is classic Nobuo Uematsu, has been remastered beyond the chiptunes of old but still retains everything that made the original soundtrack great.  FFV for iOS also includes an auto-battle mode, which speeds up the wait time between turns and automatically uses the previous commands issued for every character. This one little addition does a lot towards speeding up the grind, which is always a concern with these early RPGs. Little additions such as the ability to pinch-zoom the in-game map are also nice touches. 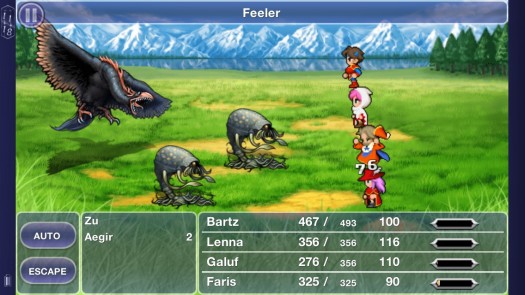 It’s always hard to review these classic FF titles on iOS because they’re always essentially ports of ports of the originals. Just as was the case with the previously released iOS ports, Final Fantasy V is a no-brainer if you’re an RPG fan and have not had the pleasure of playing it. The story, job system, and classic Final Fantasy gameplay are strong in this title and showcase the golden age of  Squaresoft 16-bit RPGs.

At the same time, the changes to the visual engine and minor gameplay tweaks probably aren’t enough to justify a purchase for fans that have already completed the game (especially on GBA). Although, there’s still enough nostalgic appeal that odds are you’ll probably buy it anyways.