Man, 2014 has already been an absolutely crazy year for roguelikes, and we’re not even halfway into it. With the intensely strategic Hoplite, the everything-and-a-bag-of-chips Cardinal Quest 2, the unique sci-fi hybrid Out There, and the iPad port of the grand FTL, you might find yourself wondering how many more high-quality roguelikes you need on your mobile device. That’s a valid question, and it’s one that hits Quest of Dungeons ($1.99) right in the gut. This is a great, high-quality example of a roguelike, hitting all the expected buttons in the right ways. If you find yourself yearning for another good roguelike, particularly a fairly orthodox one, do yourself a favor, open up the App Store, and throw down your two bucks right now. If, however, you’re still right in the middle of Cardinal Quest 2, only taking breaks to play Hoplite, it’s sadly a bit hard to come up with reasons why you should add Quest of Dungeons to your cycle.

Before going too far in, let me answer your question. Yes, you have seen these graphics before. This game is using the Oryx set of sprites, which many games use because in a funny turn of events, being an awesome programmer or game designer doesn’t always coincide with being a great sprite artist. In a perfect world, I would love to see each game have its own unique graphics, but this is a genre born from and still frequently living in ascii art, so let’s just try to move past that and focus on the gamey bits of the game, shall we? 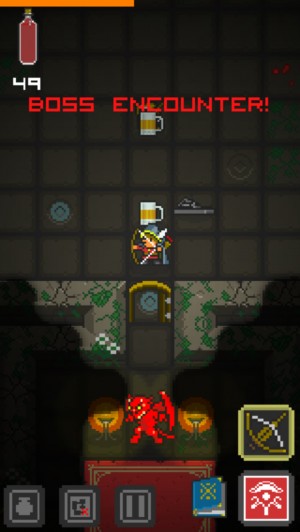 Quest of Dungeons is, as I said in the opening paragraph, a very orthodox roguelike. After a humorous introduction, you find yourself on the first floor of a dungeon, tasked with making your way to the bottom and defeating the evil that lurks within. You have your choice of four different characters: the warrior, the wizard, the assassin, and the shaman. They are all unlocked and playable right from the start, and while they lack the diversity of Cardinal Quest 2‘s cast, each one still manages to make for a fairly different style of play. Each floor of the dungeon is procedurally generated and actually quite large by genre standards.

Packed into each floor is a random assortment of enemies, treasure, traps, and bosses, and you need to use whatever you can find to take care of business. You’ll sometimes run into a shopkeeper where you can unload some of the items you don’t need and pick up a few extra things to help you, but for the most part, you’re on your own. Naturally, in keeping with the genre, your first death will be your last. If you die, you lose all the loot you’ve collected, all the progress you’ve made, and all the levels you’ve gained. This encourages you to go all out and use what you find, rather than stockpiling it like a squirrel preparing for the winter.

You’ll find plenty of stuff, too. Quest of Dungeons is very generous with the loot, throwing tons of single-use items, books that teach you skills, procedurally generated weapons and armor, and gold your way as a reward for poking around thoroughly. Your inventory is huge but limited, and you’ll likely find your bag bursting at the seams from the goodies from just one floor. The game is generous enough with life-restoring items that you’re unlikely to run into problems from any single non-boss monster you come across, but groups can get pretty dangerous, and the bosses in this game come fairly often and are exceptionally powerful.

In typical roguelike fashion, the game is turn-based, with each move, item use, or attack taking one turn and allowing the enemies to do the same. The basic controls in this game are quite intuitive and as a result, it’s a lot more natural moving your character around than it is in Cardinal Quest 2. If you want to move, you simply tap the square you want to move to. If you want to attack something or pick up an item, you tap on it. My only real problem with the basic controls is that a mis-touch will send your guy scooting around to try to reach that square, with any surrounding enemies getting to take a whack at him for each step. This is probably less of a problem if you don’t have sausage fingers like me.

Where Quest of Dungeons‘s controls fall behind Cardinal Quest 2 is in its interface. Using items requires going into a separate menu and using them from there. Similarly, only one skill is immediately accessible at the touch of a single button. You can set which one you want that skill to be, but all of the others will need to be selected out of a menu first. 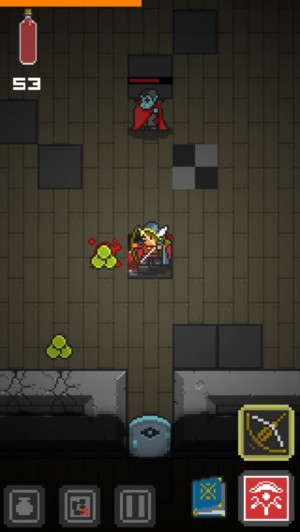 It’s not bad, and it allows you to have many more items and skills at one time than Cardinal Quest 2 does, but it’s certainly a bit more irritating, especially if you’re using the wizard. The interface for the shop is also pretty ungainly, basically opening your inventory and the shop’s inventory on top of each other, leaving you to tap between them. It’s not unlike how I’d imagine Windows to work on a tiny screen.

Though the sprites are familiar, the game still manages to look really nice. Each floor has a different set of tiles, there are tons of different enemies, and I’m really happy with the level of zoom the developer has chosen. It provides a nice balance between getting to see clear details while still showing enough of the surroundings. I’d also like to mention the music, because it’s quite good and there’s more of it than I expected there to be. The game also offers a leaderboard and a list of achievements through Game Center. Most of them are connected to finishing the game with the various characters and on different difficulty settings, but there are a few that will keep you playing even after clearing out the adventure.

Quest of Dungeons is a very good roguelike and a fun game. It’s completely IAP-free and everything in the game is available to you right from the start. Apart from the generic sprites, it’s hard to fault the game with anything other than playing things a bit too safely. The problem, I suppose, is that in adhering rather closely to genre conventions, Quest of Dungeons ends up doing many of the same things as Cardinal Quest 2, but not quite as well, and at a higher price. If you’ve done your time with that game and you’re looking for another decent roguelike in a similar vein, you could do a lot worse than this game. It’s excellent, as people in our forums will attest to, even if it is enshrouded in the shadows of its recent peers.