It may have a name that calls to mind bright red birds or baseball, but Cardinal Quest ($3.99) is a pretty cool roguelike. Originally released on PC and later ported to iOS in 2012, it basically boils the genre concept down and streamlines it as much as possible. Interestingly, the way the developer went about simplifying it didn’t so much remove depth as take the direct responsibility for handling it out of the player’s hands. It proved to be a great fit for mobile platforms, and has a good following of fans, including me. Unfortunately for me, when I finally made the jump to newer hardware than my creaky old iPhone 4, I was a bit heartbroken to find that Cardinal Quest didn’t work very well anymore thanks to the new dimensions of the screen. I was left waiting for the announced sequel, and after a fairly lengthy soft launch period, Cardinal Quest 2 (Free) is finally here.

It could be argued that perhaps the greatest distinguishing trait the first game had was its lean nature. In most respects, it was like many other roguelikes. You moved a character turn-by-turn through a randomized dungeon floor, battling monsters, gaining levels, picking up treasure, and looking for the exit to the next floor. What you encountered along the way was as random as the layouts, so monsters and treasure were wildly different from one playthrough to the next. Naturally, it also had one of the defining elements of the genre: permadeath. If you ran out of health and didn’t have any resurrection tricks up your sleeve, well, that’s too bad. It’s game over, and you may not press start to continue. The challenge and appeal in games of this genre is learning how to make the most of whatever the game happens to provide, and using that gained knowledge to inch ever closer to the goal. 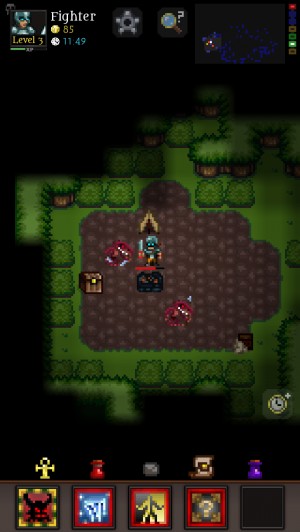 This often involves a lot of juggling around of equipment and items in menus to balance between your limited inventory and the possibility of needing alternate gear. Cardinal Quest decided to skip this part, and instead, as you picked up treasure and items, it would equip it if it was better than what you had, sell it if it was worse, or shuffle it off to your inventory if it was questionable, all automatically. Combat and movement were both handled simply by moving your character in one of the four cardinal directions. Oh hey, now I get the name. Anyway, the amount of time spent in menus was considerably cut down compared to many other examples of the genre, and that zippy pace was a great asset for people on the go.

Cardinal Quest 2 actually backs things up a bit on the streamlining. If a piece of equipment is worse than what you have, it will still automatically be sold, but everything else will bring up a prompt asking you if you want to equip it or sell it. When picking up items or spells, you choose the slot they go in. This actually doesn’t affect the brisk pace of the game all that much, and I personally enjoy having just a little bit more control over some of my character’s details. This is basically what Cardinal Quest 2 brings to the table. It’s a slightly more complex take on the first game’s ideas that still manages to keep its speedy pace and accessible nature. For example, in the first game, leveling up was a hands-off experience. You gained a level, you become stronger. In Cardinal Quest 2, your stats are still done automatically on a level up, but you also are given a point to allocate towards a variety of skills or passive boosts unique to your class. It’s a little thing, but it adds further to the customization and, by consequence, variation of each play session.

The number of available job classes have increased from three in the first game to six in Cardinal Quest 2. The original jobs of fighter, wizard, and thief make a comeback, and are joined by the paladin, ranger, and pugilist. Each of them has different stats and access to a unique set of skills. Unlike the first game, they are not all available from the start, however. Initially, only the fighter is available to choose, with the other classes unlockable using the game’s persistent currency, called morale. The jobs from the first game unlock very quickly, though, with a couple of decent games earning you enough to unlock one of them. The new jobs require twice as much morale to unlock, but even that’s not all that bad. That said, if you don’t have the patience to earn up the morale to unlock them, you can buy some using IAP. It’s really not necessary at all, though. Earning up the currency the normal way means you’ll be getting new stuff to try at fairly regular intervals, giving the game a feeling of tangible progress that roguelikes tend to lack. 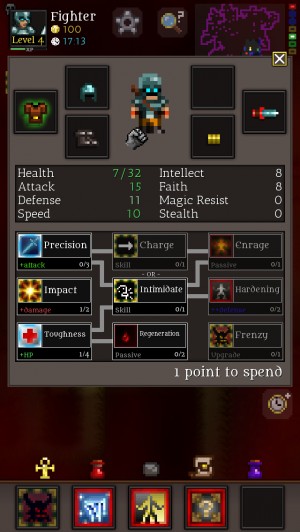 Each of the job classes also has a variety of starting skills and gear to choose from, though like the job classes themselves, each one beyond the first must be unlocked using morale. The final unlocks for each class cost a pretty decent chunk of change, but since your earned morale is based generally on how far you get in a session, by the time you’re looking at picking these up, you’ll probably be making enough to get them, once again, after a couple of games. That’s the extent of the potential IAP pitfalls in the game, leaving us with something almost shockingly generous for a free app. After choosing your class and starting skill and gear, you can also choose your gender and your character’s skin color, both of which are nice touches, even if they’re not always clearly visible on the little pixelated heroes.

As you level up and spend some points on skills, it’s pretty cool how different each of the jobs starts to feel. For example, the thief gets skills that support skulking around and backstabbing monsters, while the fighter gets skills that allow you to charge headlong into hordes of enemies and come out with your skin intact. You truly have to adapt your playstyle to each class, and even then, depending on which skills you prioritize unlocking, you’ll probably play a bit differently. We’ve already got all of this variety, and I haven’t even gotten to the content of the dungeons. Since this is a roguelike, you’ll also be earning random spells, equipment, and items as you play, which will further determine the nuances of your playstyle. Throw in the random maps and monsters, three difficulty settings, and the fact this game has three acts to the first game’s one, and you’ve got a game that offers a huge amount of value.

Like the first game, you control your character simply by touching the direction you want to go. This sometimes has the unfortunate effect of your finger blocking your character, but since the game is turn-based, it’s not terribly detrimental to your enjoyment. One big change is that instead of using the landscape mode, this game is played in portrait mode. Since it’s basically a one-handed game, I’m glad to see the developer opted for this style. It’s very comfortable to play on my phone, even if I’m standing up on a train or something. Your character’s movement speed is a little bit slower than it was in the first game, and while some might see that as a negative, I found it helped cut down on some of the twitchy movement accidents that can occur with this game’s unusual control style. 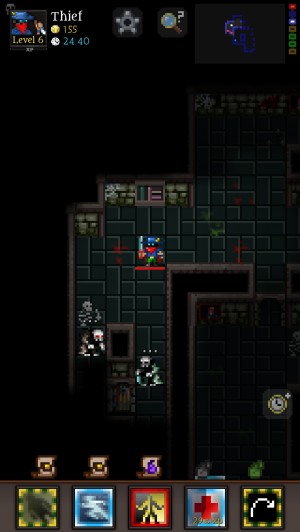 The dungeons themselves feel a bit bigger than they were in the first game, but thanks to the map being on-screen at all times, they’re easy enough to navigate. The fairly large selection of loot in the first game is naturally expanded upon here, especially with regards to equipment and items. A great roguelike doesn’t necessarily have to have great loot, but it sure doesn’t hurt. The appearance of the dungeons, and to an extent the whole game, is considerably improved on the original game. It’s still using a very pixel-heavy style, and the heroes themselves don’t look all that different from before, but an abundance of new level themes and a more cohesive user interface go a long way towards making the overall game feel more professional. Oh, and bonus, the game actually pays attention to the mute button on your device now, so there’s no more accidentally waking up loved ones when you want to sneak a quick game after going to bed.

Another criticism of the first game addressed here is the lack of leaderboards and especially achievements. There are three leaderboards, each one tracking your best score for each act, and a whole pile of achievements. The achievements include a good mix of progression-based goals and more off-the-wall challenges, like trying to get through the first level as the thief without being spotted once. Best of all, achievements come with a tangible reward in the form of morale points. It’s pretty much the best possible scenario, and it’s yet another sign that the developers have taken this version of the game a lot more seriously than last time.

The only criticism I have in the whole affair is that without any sort of hunger mechanism, there’s no real downside to skipping turns. Your skill cooldown is based on turns, so if you’re in a safe place, it’s easy and consequence-free to tap a few times on your hero to queue up your spells again. You can also use this to lure enemies into advantageous situations. Any roguelike that lets you skip turns will have strategies like these, but they’re usually balanced by some sort of mechanic where if you hang around too long in one place, something bad happens. It’s not a gamebreaker by any means, and the game is still plenty challenging without it, but it’s an odd omission for a game that hits pretty much every other note right.

That extremely minor quibble aside, everything comes together into a game that still upholds the ideals of its predeccessor while improving in virtually every way. That first game was already a very good game, and with everything added to Cardinal Quest 2, it would be hard to argue with even if it were priced the same or a bit higher than the first. Yet somehow, this game is free. Given the sheer amount of potential gameplay to be had thanks to so many choices and random elements, it’s one of the better deals I’ve seen in a while. If you like roguelikes, this is an easy decision. If you even like the idea of roguelikes, or enjoy a nice, fast-paced, light RPG experience, you should definitely give this a try. It’s pretty much everything you could ask for in a sequel.