There are four types of people in this world: those who love Wipeout, those who love F-Zero, those who love both, and those with bad taste in racing games. When it comes to the battle for the best futuristic racer, it’s been a real tug of war between those two franchises for years. F-Zero of course came first, but wasn’t followed up on until after Psygnosis’s brilliant launch of the Wipeout franchise. Wipeout took the crown in the 32/64-bit era, with F-Zero making a surprising comeback in the following generation with the SEGA-developed F-Zero GX, still one of the finest racing games ever made. Not content to sit on their laurels, the Wipeout team came into the next gen hard with what was one of the best-looking PlayStation 3 games for a very long time, Wipeout HD. Sadly, both franchises appear to be dormant, with Captain Falcon of F-Zero seeing more time Falcon Punching than driving the Blue Falcon, and nary of a whisper of Wipeout after the release of 2048 and the disbanding of Studio Liverpool.

With these two titans taking a nap, and for that matter, unlikely to make an appearance on iOS anytime soon, the time is ripe for someone to step in and take the futuristic racing crown. There have been a few contenders, most notably Repulze ($0.99), which kind of carved its own path, and the original Flashout 3D ($2.99), which was slavishly faithful to its aim of imitating Wipeout. Neither was a match for those big budget giants, but it’s hard to realistically expect that from small teams on shoestring budgets. The real question is, with the release of the bigger, brighter, and, well, flashier Flashout 2 (Free), do we have a new iOS champion? Unfortunately, I’d say the answer is a firm no. 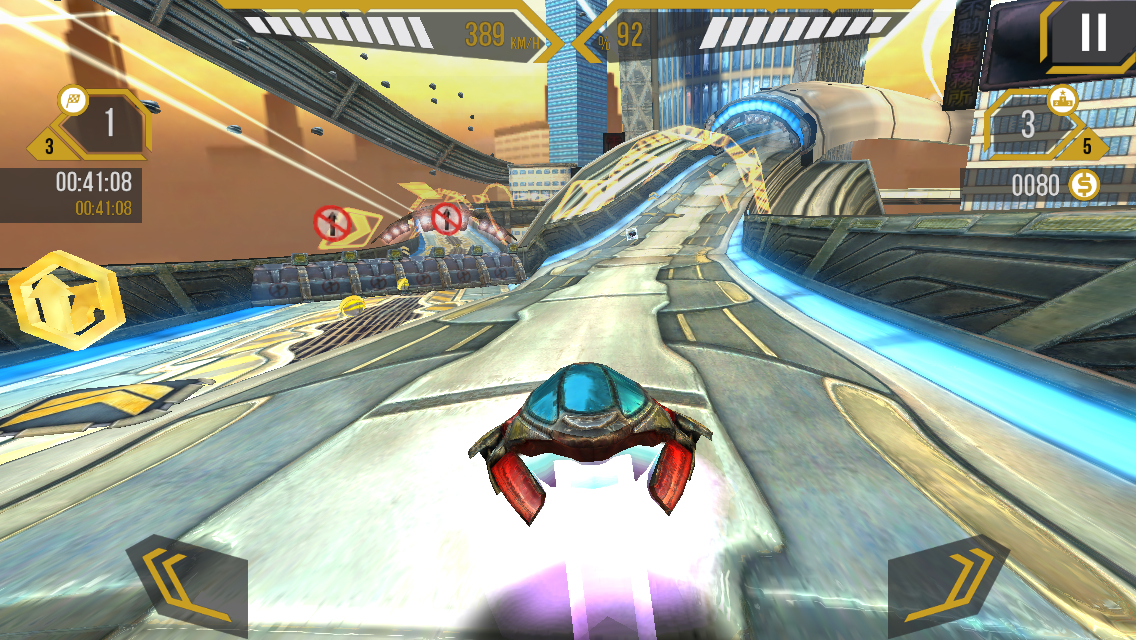 The tragic thing is, this game ends up being a whole lot worse than it ought to be, and it comes down to one simple, yet horrifically complicated, thing: poor balancing. Now, don’t get me wrong, futuristic racers are often quite difficult by nature due to the high speeds of the vehicles. F-Zero GX might be one of the hardest racing games ever made. It’s something I actually expect from the genre, and when that thrill of the slightest mistake costing you the race is removed, something important is lost. The difference between those genre kings and Flashout 2 is that in those games, the only barrier to your success is your own skill level. In Flashout 2, that’s not always the case. Without the right vehicle, the right items, and the right upgrades, all the skill in the world isn’t going to help you in certain races. What can help you is the lovely selection of boost items offered up to you before each race. You can buy these using coins that you can earn in-game by winning races and picking them up off the track.  You can also buy these coins with IAP, of course.

The chance to buy items comes just before you start the race, via a handy little pop-up window. The items on offer include shields, boosts, mines, and a few different weapons you can buy with in-game coins. Then, without missing a beat, right beside those items in the little shop window are the IAPs for coins. Granted, there’s no practical difference as to where the developers opt to put the currency IAPs in relation to other items in the game, but I have to think there’s a reason why this stuff is usually put in its own menu, and that reason starts to become clear when you’re staring at a literal example of pay-to-win just before starting your race. Most egregiously, this shop menu appears just the same when you’re playing multiplayer as it does in single-player. I think many people have accepted the idea that players can pay real money to get a leg-up against a computer opponent, but it somehow feels wrong that you can do this in a race against a real person. 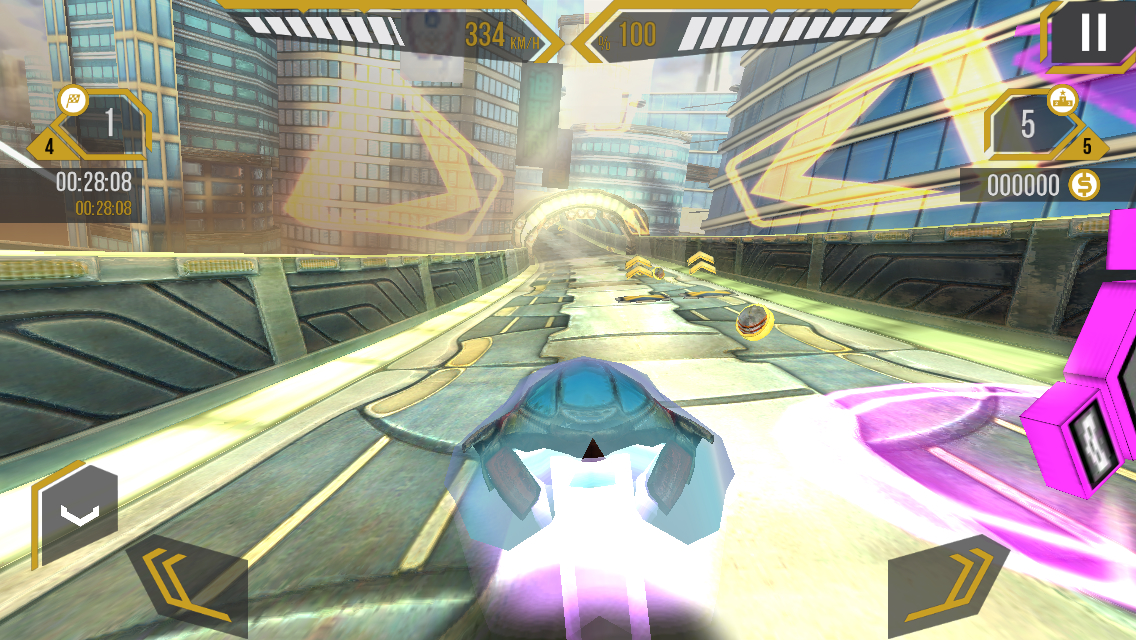 It’s easy enough to grind out a few races to earn a bunch of coins that you can then gamble on some items to try to finish more difficult races, of course. You can also upgrade your vehicle, though the most useful upgrade, the speed upgrade, carries a relatively hefty cost. If you do these things, you will probably make your way through the cup you’re currently on. Unfortunately, once you make it to the next cup, you’re probably going to find your current vehicle is inadequate, and this is where the game’s economy completely breaks down. The new vehicles are pretty expensive, so you really need to save up to buy them, but saving up means not spending on frivolities like boosts that may or may not win you the race. The first few cups aren’t too bad, but it doesn’t take long before you find yourself running perfect races and still coming up incredibly short without having some relatively pricey gear. It soon becomes clear that you have a choice to grind, grind, grind, or pay the pain away.

The good news in this, if some can be found, is that economic balance issues are one of the easier things to patch, and the developer does seem committed to finding a bit more fair of a curve. There’s already been an update that apparently doubles the amount of coins distributed through play and removes an extremely irritating mechanic present in the original version. Before, if your vehicle was destroyed, and it often will be, the game made you wait an agonizing five seconds before respawning you, asking if you want to pay to instantly respawn, with the cost going down with each tick of the timer. If this had stayed in the game, I’d be even more cranky, but it instead can now serve as evidence of the developer’s goodwill in trying to find a more appropriate balance.

I hope the developers follow through, because while the bathwater may be a bit dirty and smelling faintly of cabbage, the baby itself is Gerber-tier awesome. The gameplay is a major improvement over the first Flashout. The controls are much smoother, the feeling of speed is stronger, there’s a larger assortment of vehicles and tracks, and multiplayer is here right from the start. The track designs show a lot more sophistication in how they’re laid out, and from a visual point of view, this sequel shows signs of moving in its own direction rather than directly nicking from Wipeout like the first game did. Slice away all the problems of how the economy’s been implemented, and you’ve got a great sequel and a very competent futuristic racer. That’s a fair bit of slicing at this point, however.

Flashout 2 offers a nice variety of control options, with accelerator controls set as default. Regardless of the setup you choose, you’ll find the vehicles are a lot easier to handle than they were in the first game. In that game, it often felt like you were fighting against some unseen force pushing the other side of your racer, but in the sequel, things feel a lot more natural and smooth. It’s a lot more fun to play as a result. As in the first game, each track has a secret shortcut you can open up by collecting an icon on the track, though if you miss the icon, you’ll almost certainly wreck your vehicle on the closed off wall. It’s a good balance of risk versus reward, so the shortcuts don’t quite break the game the way they do in some other racers. The game’s 10 tracks are based on real cities, but that usually just amounts to having whatever famous building or monument the city is known for parked somewhere in the background of the neon tunnels and ramps. 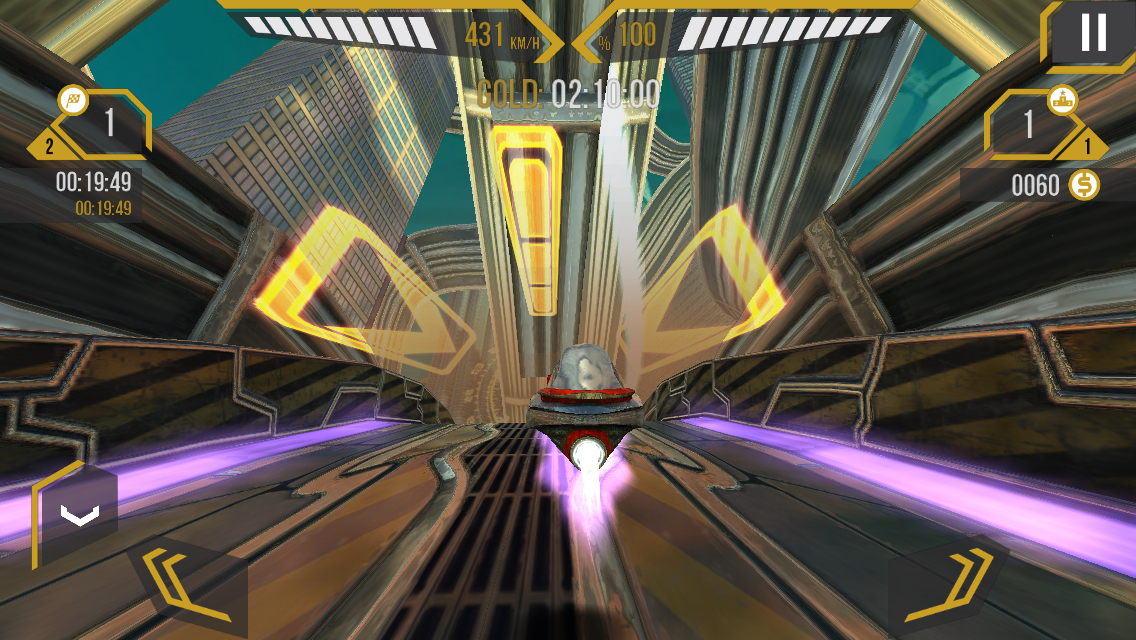 In terms of gameplay modes, you get all of the modes you would expect out of a racer. There’s a career mode where you work your way through a variety of cups, a single race mode, a time trial mode, and the multiplayer mode. Tracks must be unlocked by playing the career mode before you can use them in the other modes, but it doesn’t take too long to get the bulk of them opened up. The multiplayer mode works pretty well mechanically, if you can find an opponent. Still, while everything runs smoothly, I had trouble investing myself in the multiplayer mode knowing that my opponent could just sink a ton of coins in and kick my butt regardless of skill. That same feeling taints the game’s Game Center leaderboard. At least the achievements are clean, I suppose.

I hope the game gets better with updates, because it’s got a very solid core. The graphics are great, the controls are nice, and there’s a lot of content. The problem is that with the way things are set up right now, Flashout 2 feels like a free-to-play game, and not a particularly fair one at that. That makes it a tough recommendation for all but the hungriest fans of futuristic racing games. If you’re interested in the game, keep your eyes on the thread in our forums. The developer is participating and you can probably get an advance idea of potential updates.