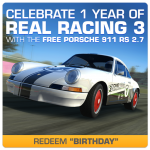 It just goes to show how quickly things happen in the App Store, as it feels like Real Racing 3 (Free) was released ages ago, but it’s only been a year. Time flies on the App Store. We loved it in our review, and followed the review up with a guide on how to play it without spending money.

Well, if you’re still playing Real Racing 3, or just still have it on your phone and haven’t played in forever it might be worth firing it up to grab the free 1972 Porsche 911 Carrera RS 2.7. The developers tweeted about it last night, and grabbing the car is as easy as following the banners for it in game.

If you’ve yet to try Real Racing 3, I say give it a shot. It’s a pretty awesome racer, and while it’d be nice if you didn’t initially have to tip toe around free to play elements, you can still have a lot of fun in it spending zero dollars.