Firemonkeys’ Real Racing 3 [Free] is almost upon us, and whether you love that it’s free or you hate that it isn’t a buy-once-play-forever title, it’s going to require a bit of strategy to get the most gameplay out of the title while spending the least amount of money. Managing timers in free to play games can almost be a mini game themselves, and intelligent repair scheduling and car purchasing can significantly mitigate how much time you spend waiting versus how much time you spend racing. While its US release is still a few hours out, now is the time to absorb some strategy on how to spend as little real money as possible while playing the game.

Yesterday I started a thread in our forums asking for tips from New Zealanders and “New Zealanders" who have been playing the game since its soft launch two weeks ago. What’s strange about Real Racing 3 is that it’s almost the reverse of your typical free to play game. Titles like Clash of Clans (Free), for instance, have very short timers at the start of the game that slowly ramp up into building upgrades that you have to let run over night, or even multiple days.

On the subject of which of the starter cars to get, we agree with Xeyad: “Go for the Nissan Silvia, because it accelerates faster and brakes better than the Focus RS." Additionally, when looking at what to get next your additional car purchases should be from the next tier of cars instead of merely saving up for the Focus RS to have two cars for the same class of races. While you totally can buy the Focus RS as your second car, you won’t be able to advance outside of the races that both those cars are eligible to compete in.

Buy A Second Car as Soon as Possible

In its current implementation (which we’ve already seen can be tweaked on the fly) the game’s timers seem to be the most punishing at the start of the game when you only have one car. The overall consensus seems to be to do everything you can to reserve both in-game money and the various premium currency you can scrounge up on rushing to owning multiple cars.

Connector explains how he did it:

The most important tip that I have is try to get 3 cars as soon as possible to counter the wait timers. Don’t bother upgrading, repairing, or servicing your car until you get your third car. This way, you can switch cars once the lenghty wait timers hit, and you will enjoy the game alot more when you have 3 or more cars.

As you race your cars, they eventually need various repairs, but with two cars you can essentially play twice as long as you beat up one car, then move on to the other. So, at the start of the game it pays off immensely to be patient with timers and let them run instead of dumping the premium currency to speed those up. 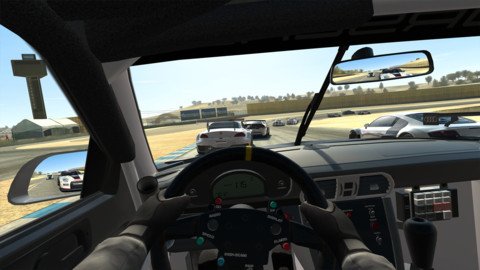 Keep An Eye Out For Deals

Amusing Grace points out that the 3rd, 6th, and 9th race in a particular tier will feature a car that’s on sale. You will only get this offer once, so try to plan ahead to take advantage of these offers whenever possible. Also, if you’re having trouble with races and need to upgrade your car, try to do it as strategically as possible. If you just need a small edge, go for a inexpensive upgrade like tires. If you’re committing to something more substantial, upgrading your drivetrain is the best bang for the buck.

As mentioned by Hoggy110, a mixture of taking corners conservatively to avoid damage while doing everything you can to get out of the way of the AI racers as soon as possible will keep you in the game longer. More damage equates to the necessity of more repairs, and the first few corners can both make or break your car as well as your positioning in the race itself.

Connector also has had good luck getting creative with shortcuts:

This may sound really stupid, but there are times that you may just want to cut through the grass to pass like 10 cars when the ai cars are getting bundled up. While your car will get a little damage from this, you may actually gain more money cause of placing, a faster time, and possibly less overall damage than actually passing the cars on the track. I know the expert players are gonna cringe from my remarks, but it is an option, and it works, especially for beginners.

Find a Control Method That Suits You

Experiment with the different control options finding the best one for your personal level of driving skill. Real Racing 3 features tons of assists, making the game incredibly easy to manager for players who aren’t that experienced with racing games, but these assists can also be detrimental to your performance. For instance, the brake assist seems a little heavy handed compared to how you might brake if you were controlling them entirely yourself.

Turning off these assists can be a double edged sword, however, as once again you come face to face with the balancing game that is your overall racing performance and how damaged your car gets. It’s entirely possible to make a greater profit placing lower in multiple races than going all out in one race driving so aggressive you’re forced into repairing your car immediately.

On the subject of repairing your car, keep an eye on which items actually are impacting your performance. For example, there’s not much reason to take your car entirely out of commission to repair your headlights as the performance impact of them being broken is negligible and once they’re totally broken it’s not like they can get damaged more. Also, JagerBombS mentions that brakes needing servicing isn’t that big of a deal either, especially if you get good at controlling them manually and handling corners mainly using deceleration.

Multiple forum members have suggested getting involved in the social features of the game, as the more friends of yours that you’re racing against, the better the rewards can be. Speaking of rewards, The Stick plays by finding what he calls an “easy win" race that you can race over and over again to grind money quickly. He’s partial to doing five laps on Suzuka with the Ford Focus RS and four laps on Mount Panorama with the Audi TT Roadster.

Also, like many free to play games, keep an eye out for bonus offers to get additional premium currency. These games almost always have offers you can complete such as liking Facebook pages, checking out other apps, and more simple things to get a small boost.

Queue Up Timers Before Bed

Meanwhile, both JagerBombS and FilipAGuy are mitigating the timers by trying to be a bit more proactive with when you actually execute your various repairs and upgrades. For example, if you’re going to bed or aren’t going to be able to play for a while, queue up a ton of timers. When you come back, everything will be ready to roll.

If you’ve got any similar tips, feel free to drop them in the comments here, in the forum thread, or both.