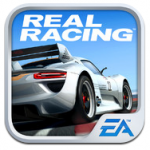 In the life of the App Store, the original 2009 release of Real Racing ($2.99) was a massive turning point. As mentioned in our review, both the graphical quality and the “feel" of the game were unlike anything else available at the time. Almost a year and a half later when Real Racing 2 ($4.99) hit, we questioned whether or not it was “the perfect iPhone game" in our review. Fast forward two more years and tonight Real Racing has officially turned into a trilogy with the release of Real Racing 3 (Free). Everything in the game is better than its predecessors, except how much you’ll need to fork out if you want to play it like you may have played previous installments in the series- Or essentially any racing game you’ve ever played before.

Real Racing 3 by far has the best “out of the box" experience of any iOS game I’ve played. After a totally free download which is going to suck up close to 2GB of free space on your device once it’s installed you’re thrown into what initially seems to be a typical pre-rendered intro cut scene of a Porsche zooming around a track- But then you quickly realize this isn’t pre-rendered at all, this is running in real-time, on your phone. This first race serves as a brief tutorial of sorts on how the game works, and if you’re online, you’ll come to the second amazing realization that these other cars in the tutorial were actually driven by real people via Firemonkeys’ new “Time Shifted Multiplayer" system. The whole thing is ridiculously impressive, particularly if you’re used to the typical free to play offerings on the App Store which normally consist of basic arcade style games or endlessly reskinned cow clickers. 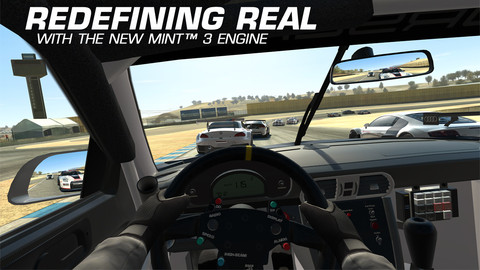 From there, you buy your first car (Per our tips post we recommend the Silvia!) and you’re off to the races. I cannot stress enough just how great the graphics are in Real Racing 3. “Console quality" seems to be a buzzword often thrown around, but if there’s any game that deserves that distinction it’s this one. The game screams on the iPhone 5, with high resolution textures, amazing looking models, incredibly detailed car interiors, and mirrors that actually work. The sound design is great too, and with a good pair of headphones it’s crazy just how immersive the game can feel- Even on the 4" screen of your phone.

Like previous Real Racing games, RR3 sports enough control configurations to satiate everyone regardless of how crazy you want the setup to be. There’s options for tilt controls, on-screen controls, and every mixture of the two you can think of. There’s also assistive systems for practically everything. If you’re a super casual player that isn’t very good at racing games, leave steering assist, brake assist, and traction control on and all you’ll need to worry about is tilting your phone to drive around the track. If you’re a experienced racer, you can take full control of everything (except shifting gears, oddly enough) and likely see way better results as you’re not subjected to the overly-cautious automatic systems.

I’ve really been enjoying how the new Time Shifted Multiplayer works in Real Racing 3. Racing against ghosts has been around for what feels like forever, where you’re playing against a car that you cannot interact with, recorded from a previous racing attempt. In this game, Firemonkeys have taken similar data and melded it with an AI racer. If you play into the social features and have friends who are also playing the game, you’ll be actively racing against them, potentially hours after they completed the same race. The experience is particularly cool once you link up your Facebook account and randomly see friends on the track that you didn’t even know had the game. What’s even better is catching up to one of these friends, and actively being able to ram them out of the way to take first and beat their time.

After playing a few races, you’ll quickly come to the harsh realization of just how much of a timer-based free to play game Real Racing is. You’ll start the game out with a small initial load of premium currency, and periodically unlock smaller amounts in game, but Real Racing 3 is as much a waiting game as it is a racing game. You’ll eventually find yourself waiting for the weirdest things stopping you from racing again, covering everything from installing performance upgrades to repairing your suspension. Of course you can skip all these time sinks by making it rain real-world dollars, making the actual price of Real Racing 3 anywhere between free to infinitely expensive depending on how often you open your proverbial wallet. 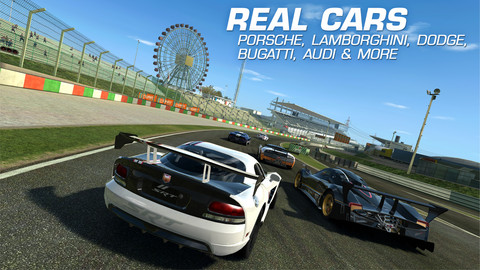 The up side, if there is one, is that these timers can be somewhat mitigated by playing intelligently and may not be an issue for you at all depending on how you play iOS games. Racing conservatively and actively trying to avoid wear and tear on your car can allow you to squeeze out a few more races before you need to repair, but you could also make the argument that what’s fun about these sorts of games is aggressively taking corners, slamming into cars, and barely squeezing out a first place finish. You can’t do that in Real Racing 3 unless you want to wait, potentially a very long time.

Personally, I’m so inundated by other things to play that the way I’ve been enjoying Real Racing 3 is by playing as much as I can, eventually hitting the wall with timers, and then just waiting for the game to send me a push alert telling me my car is repaired and ready to go. Then, when I have time I’ll do a few more races before repeating the cycle again. I’m totally OK with this because these short bursts are typically how I play games on my phone. However, if you’re the kind of person who wants to download a game like this and blow through it in one massive marathon play session, Real Racing 3 is very much not the game for you.

On the subject of push alerts, in its current iteration having them enabled has some serious drawbacks if you’re annoyed by alerts. I’m of the camp of people who like their phone to buzz and beep as little as possible. I’ll almost always say no to the popup asking if an app can send you push alerts, and will instantly delete anything that sends me alerts without asking, but I like Real Racing 3 enough that I want to be notified when I can play it again. Unfortunately, by allowing alerts, you’re also inviting an endless stream of beeps and vibrates, particularly if you’ve got lots of friends playing the game. Real Racing 3 will send you an alert whenever someone beats your time in a race.

If you’re an active player with friends who are also fairly active, you’re in for alert spam like you’ve never experienced before. This wouldn’t be so bad if these alerts actually did something. As it is, when you get an alert that a friend beat your time, you slide it, and the game just loads. It’s not like you can swipe the alert to get thrown directly back into that same race to compete against them. The implementation seems really sloppy, and I wish there was a way I could turn this alert spam off while keeping the whole “Hey your car is ready to race again!" alert on.

Firemonkeys have shown that they can tweak these sorts of things on the fly. Since its release in New Zealand two weeks ago, the amount of time players have needed to wait for various things in game have varied wildly, and the solution to my push alert problem is just a checkbox away. It will be interesting to see how these aspects of the game evolve over time, especially considering in its current iteration the way timers work don’t make a whole lot of sense. For instance, you can almost mitigate them entirely (or at least get to a point where you can play the game for way longer before stopping) by purchasing multiple cars. Real Racing 3 is actually at its worst for gameplay-stopping timers for new users, as once you hit the point where your car has to be repaired there is absolutely nothing for you to do other than wait or pay. Making new players hit this wall seems very counter-productive when it comes to user retention.

Real Racing 3 is a weird game to review. On one hand, it’s free, and is the absolute best looking game available on the App Store right now. You need to experience the sights and sounds of the game as it is downright jaw-dropping to see what Firemonkeys has accomplished on a technical level. On the other, it feels incredibly strange to take a genre that’s typically very hardcore and wrapping it in free to play trimmings with hard timer-based stopping points. The juxtaposition between awesome adrenalin-fueled racing and the “Sorry bro, insert coin or come back later" is very, very odd.

If you’re a free to play gamer used to the often basic games that litter the Top Free chart on the App Store, Real Racing 3 is going to knock your socks off. Our verdict is to definitely give the game a try, and if you feel the timers are too oppressive, the alerts are too annoying, or it just doesn’t otherwise jive with your play style, either download one of the other Real Racing games or check out other great racers on the App Store like Gameloft’s Asphalt 7: Heat ($4.99) or EA’s Need For Speed: Most Wanted ($4.99) and race the night away.

NOTE: We’re not sure what (if any) difference there is between the two Real Racing 3 entries on the App Store. If one link doesn’t work in your region, try the other one.