Many of you may not remember the iOS marketplace in 2009, but when it was released, Eliss was a dominant authority in the puzzle arena. Now it’s back five years later in the form of Eliss Infinity ($2.99), and the good news is, it’s better than ever. Somehow, Infinity manages to balance both puzzle and action elements to near perfection.

Don’t be intimidated by the fact that it’s a puzzle game — it’s deceptively easy to pick up. Basically, different color planets will appear on the screen, and so will colored dotted lines to place them in. Your job is to take each color and shove it into it’s “goal" so to speak. That’s it! Well, kinda.

Your objective is complicated by the fact that you can meld smaller planets together into larger ones, and the goals are of varying sizes. At first it’s a bit tough to judge sizes at a moment’s notice, but given the well designed nature of the planets, it’ll become second nature. Likewise, you can also use two fingers to “rip" planets apart like cellular organisms to create more objects, or resize them to put them into smaller goals. The simple concept of combining and separating planets like this makes for some incredibly engaging gameplay, as you have multiple courses of action at every turn.

This is further complicated by a restriction — different color planets can’t touch each other, lest they deplete your health bar, forcing you to restart a level. Later levels will spawn planets very quickly, leaving you to combine and split them with multiple fingers before you start rapidly losing health. Once vortexes come into the mix that destroy your planets on their own, things get even more tricky. If it sounds fast paced — it absolutely is, and it certainly is never boring. 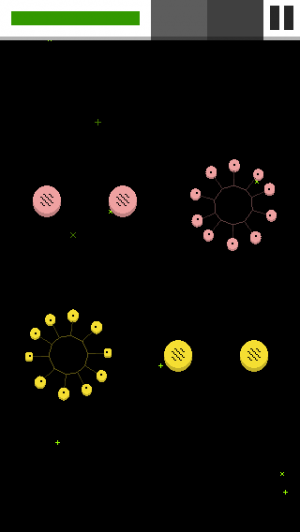 The thing is, Eliss Infinity has a well designed learning curve that helps you figure out everything you need before it gets crazy. It’s useful given that Infinity has an endless mode centered around earning the highest score possible. It’s a feature that wasn’t in the original, and serves as a nice way to elongate your playing time beyond the rigid level system.

You’ll also be able to mess around in Spacebox, which is basically a sandbox mode that lets you practice to your heart’s content. While it’s not much more than a “free play" session, it helps players acclimate to the concept of splitting and combining planets better than any timed tutorial ever could.

It’s pretty packed for a puzzle game all in all, so there’s plenty for you to do as you master the basics and aim for the highest score possible. One of the main things I didn’t like about Infinity in particular is the menu screen, which is a little too minimalistic for its own good. It takes some trial and error to figure out where everything is, and some people probably won’t even bother to locate everything.

If you’re looking for a faster paced puzzle game, Eliss Infinity is a good bet. It offers up a diverse gameplay experience, it has a ton of content, and an endless mode ensures that you’ll have plenty to do after you’ve beaten every level. Although it could have used a few more visual upgrades in comparison to the 2009 release, any puzzle fan will enjoy it.