NimbleBit has garnered somewhat of a legendary reputation around here for being one of the few outfits that consistently releases free to play games without the predatory IAP mechanics that surround typical free to play games. If you haven’t played one, in NimbleBit games, IAP truly feels optional. Thankfully, it seems that this vibe persists through their new publishing effort, as Disco Zoo (Free) (Which was actually developed by Milkbag Games) perfectly fits on the App Store shelves next to Tiny Tower (Free), Nimble Quest (Free) and their other titles.

I’ve been streaming the game quite a bit on the TouchArcade Twitch.tv channel, but if you’ve missed the many explanations of how the game works, here we go: You’re a zookeeper responsible for collecting new animals and keeping your existing ones awake to generate money to buy additional aircraft to fly to increasingly exotic locales to bring a wider variety of animals to your zoo. 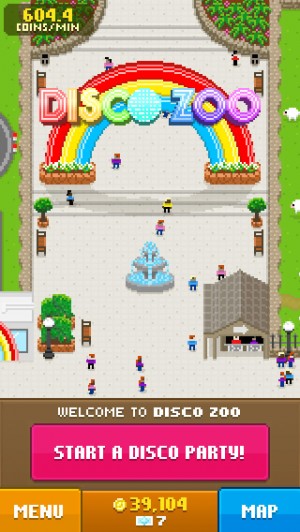 Starting out, you’ll have a hot air balloon, and with this hot air balloon you’ll be able to fly to the farm and start rescuing farm animals. This costs a small amount of coins, and seems to reliably increase in cost the more attempts you make to collect farm animals. Flying to the farm brings you to a five by five grid which you’ll get incredibly familiar with the more you play Disco Zoo.

Collecting animals involves playing a shape-based guessing game that at times feels oddly reminiscent of Battleship. At the start of each excursion the game will tell you which animals are available on this particular outing. For instance, there might be a rabbit and a pig hidden that you need to find. A pig is a two by two block of pig tiles, while a rabbit is a four tall block of rabbit tiles. You’ve got ten taps you can make to reveal individual tiles on the game board to collect ’em all and doing well in the game involves memorizing each animal’s unique tile patterns.

So, knowing the shapes of the animals, there’s a bit of strategy you can employ. Knowing that the rabbit’s tiles will be arranged in four vertical tiles means you can start tapping across the middle row horizontally to find the start of the grouping. Once you do, you shift course to revealing tiles up or down until you’ve hit all four rabbit tiles, resulting in one rescued rabbit for your zoo.

In our example, the other animal we need to find in this sample outing is a pig. As mentioned, it’s a two by two block, so you can intelligently disregard any space on the game board that wouldn’t allow a square of pig tiles to reside. If the rabbit we revealed was in the fourth column over, for instance, we know for certain that the pig tiles can’t possibly be in the fifth column, so we disregard those tiles. 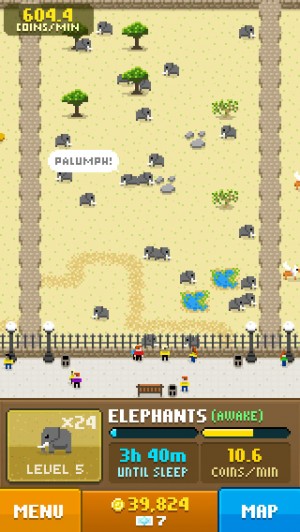 But, as I said before, you only have ten tiles that you can reveal with each run, so if you burnt a bunch of moves trying to find the rabbit, you might not have enough to hit all four of the pig tiles even if you’re lucky enough to find them all on the first try. At this point, it seems smarter to actively go for tiles you know the pig won’t be at, as each “missed" tile has the chance to reveal coins, or the premium currency, Disco Bux.

Sometimes you find yourself really needing additional moves, and this is one of the ways that Disco Bux come in to play. If you’ve got an animal you really want on an outing like a mythical rarity creature, and you don’t find them in your ten attempts, you can trade one Disco Bux for five more moves. Alternatively, watching a short advertisement also grants the chance to reveal another five tiles.

And that’s basically the core puzzle element that powers the game, which you’ll be grinding away at hundreds of times as you fill your zoo with animals. With each new animal you collect, a new coin-earning exhibit opens in your zoo. Collect enough of the same animal, and you’ll level up that particular exhibit, which keeps your animals awake longer and increases the amount of coins they earn while they’re awake.

The asleep/awake mechanic is the requisite timer element of this free to play game. To maximize your income, you’ll always want all of your animals awake, which means responding to notifications and checking back often to tap some buttons to wake up your sleepier animals. It’s not that bad though, as the animals with very short awake timers also don’t make that much money. So, even though your sheep will be asleep after ten minutes, it’s not like having them sleeping and their exhibit earning you no money is putting you at much of a handicap as they earn so little anyway. Apparently, sheep just aren’t that interesting to zoo visitors. 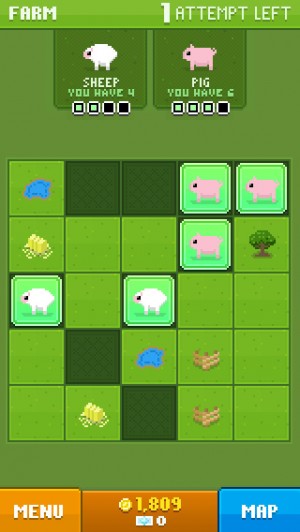 While fiddling around inside of your zoo to wake up your animals, a couple different things will happen: Coins spawn randomly from your visitors which you’ll need to tap to collect and (much more rarely) they’ll leave Disco Bux behind that you can snag. There’s also a search element kind of like Tiny Tower’s “Help find this bitizen!" where you’ll need to tab through your exhibits searching for animals that escaped. Finding them also results in free coins or Disco Bux.

The “disco" part of Disco Zoo comes from the disco party functionality. By dropping a single Disco Bux (or more if you want the party to last longer) all of your animals will wake up and you’ll earn more coins from all your animals as long as the party is in progress. The additional income is nice, but the way I’ve found myself preferring to use disco parties is to wake all my animals up in the morning. Disco Bux are reasonably easy to come by, at least in small quantities, and just letting a Disco Party run for a minute seems preferable to the somewhat tedious process of waking every single animal in your zoo up.

…Aaaand that’s pretty much the game. Keep your animals awake to earn coins, spend those coins going on excursions to rescue animals, reveal the right tiles, level up your exhibits, and eventually you’ll have a large enough zoo and enough coins to unlock the next aircraft to get to the next area to rescue animals in. Repeat. 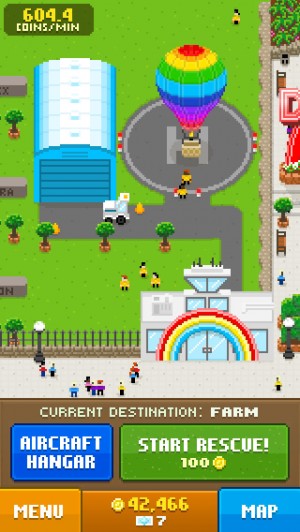 While Disco Zoo totally nails the “virtual ant farm" feel that Tiny Tower did so well with, it feels like you hit a point that there’s just not that much to do aside from grind away at searching for animals to level up the size of your zoo to unlock the next aircraft and subsequent search area pretty quickly. Outside of the loop of waking up your animals, earning coins, and spending those coins getting new animals there isn’t much more to the game.

Aside from iCloud save syncing, there isn’t any online component to speak of, so you can play the game without any kind of internet connectivity (even in airplay mode) but this also comes with the significant drawback of there being no social element to the game to keep you playing in any kind of competition with your friends. Checking out other farms in games like Hay Day (Free) provides a strong motivation to keep playing, as you can see what other people are up to and how much your farm is lacking in comparison.

Disco Zoo not only lacks anything like that, but there isn’t really any customization to speak of. You just collect as many animals you can, and… earn coins. The puzzle element is fun, but without having some uniquely customizable high level zoo or other unlockable goodies to clearly work towards eventually having to show off in your zoo it seems like you sort of just play it until you get bored of the gameplay loop and that’s about it.

To be fair, the whole “minimum viable product" strategy is a thing in free to play gaming, and something that a large amount of free to play titles shoot for on their first launch. It’s very typical for these games to start out small and add in more features as the playerbase matures and reaches the point where they need new content or features to keep players coming back to the game. It might be premature to judge Disco Zoo on the “Now what?" vibe it gives you, but the game does feel disappointingly shallow at times.

Regardless, playing until you hit that “Now what?" point is pretty fun, particularly without the feeling of required IAP, which still makes Disco Zoo pretty easy to recommend checking out. I just hope that NimbleBit and Milkbag games can keep up with features and updates before the “Now what?" leads players to moving on to different games instead of waking up their sleepy animals.