I’ve mentioned before in our previous coverage of Team Meat’s upcoming cat-breeding-simulator thingy Mew-Genics that the more I hear about the game, the more excited I am to play it. Despite their original intentions of having Mew-Genics be a quick project, the game just keeps on expanding and evolving into something greater, and this past Saturday Team Meat revealed even more details about the game in a new blog post, specifically how cat identities will work.

Team Meat previously explained how the multitude of furniture types in the game could affect various stats of your created felines and actually change up how the game plays. This time they dig deeper into the personality traits of the cats themselves. When a new cat is born it’ll come with various “cat types" that it gets assigned based on its stats. These will determine things like if your cat is lazy (aren’t all cats lazy?), if it’s aggressive or not, and even if it’s… sexy, or not. These inherent traits will determine how that particular cat looks and also how it behaves.

Beyond the types that your cat is born with, cats can also identify with individual furniture pieces, and to a greater degree with entire “furniture sets." There will be visual representations on your cat showing what they identify with, and these come in two basic forms: hats and costumes. The hats will be hair or facial items, and costumes are pretty much what they sound like, articles of clothing or other items attached to the cat’s body. So, for instance, you can tell that the kitty below identifies as a hipster thanks to its hipster-y mustache. 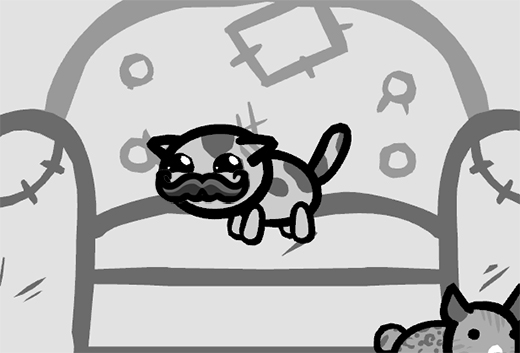 While these hats and costumes will affect the stats and behaviors of the kitties, they aren’t part of the cat’s DNA and therefore can’t be bred into additional cats. However, there are extremely rare instances where a cat will identify with something so much that it actually absorbs it into its body. In that case, you actually could breed it into additional cats.

It all sounds very elaborate, and to be honest a little confusing, but fascinating at the same time. I’m really excited to get my hands on Mew-Genics and discover all of its wacky secrets for myself. The next blog post should cover birth defects and genetic diseases (exciting!) so keep an eye out for more soon, and expect Mew-Genics to hit sometime in 2014.