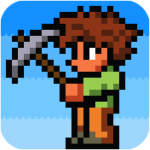 Following our look at Junk Jack X, I loaded up Terraria ($4.99) to see how they compare. The same caveats go for this game too, in that so much of these Minecraft-likes involve really setting up your own personal infrastructure of resources, a killer base, equipment, and more. This is really just the first half hour of Terraria, including bumbling through the tutorial and then finally building our first house in game which (I think?) an NPC either moved in to or will soon be moving into.

Be sure to give this a look to check out the clever control scheme they’ve come up with for Terraria on iOS. The zoom functionality is super near. Also, like Junk Jack X, we’re going to give the game a deeper look next week once we’ve spent more time with it and have a bit more impressive of a base to show off.

As far as whether to get Terraria or Junk Jack X, right now I’d say a resounding get both. They’re both so good in their own ways, that they’re totally both worth having- At least at first blush. The multiplayer in Junk Jack X is amazing, but it feels like you’re building towards so much more in Terraria. Of course, stay tuned for full reviews of both games in the not too distant future.