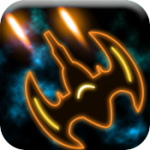 Those of you who weren’t born with a smartphone in your hands might recall the simpler days of video games. How simple? I’m talking stick figures, backgrounds painted in one, maybe two shades of color, and jarringly loud bleeps that passed as sound effects. Some of these games were awful. Others stand as classic examples of gameplay over graphics, a no-frills approach often lost in the desperate struggle to produce photorealistic graphics, and realistic physics, and realistic bleeps.

Plasma-Sky ($0.99) isn’t quite so stark, but it does hearken back to the simpler days of shmups. There’s no IAP, no dizzying array of ships with different stats and weapons, and the screen won’t fill up with bullets and background flashes and flickers that send you into seizures. At least not right away. Like Geometry Wars, Plasma-Sky applies a coating of retro paint. You control a shiny ship made up of brightly colored lines and fire away at fleets of equally effervescent enemy ships, collecting bigger and better power-ups that light up the black-as-ink sky like colored pegs battling it out on a Lite-Brite. 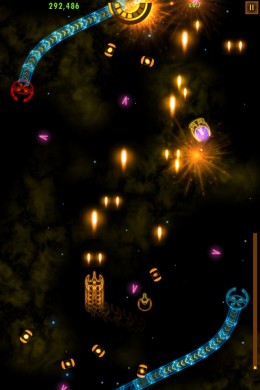 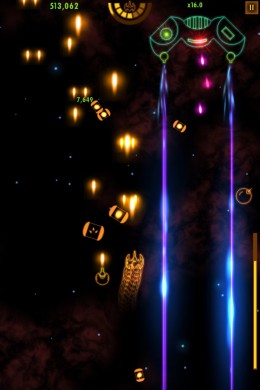 Plasma-Sky‘s utilitarian aesthetic carries over to its control scheme, and in a good way. You can tilt your device to steer your ship, or better yet, slide your thumb around; where your digit goes, your ship will follow. Firing is done for you, giving you the leisure to focus on dodging enemy fire and weaving in and out of their synchronized (space) swimming formations. The tilt controls aren’t responsive, and your thumb occasionally impedes your view, which can mean the difference between an enemy tagging or missing your vehicle. Otherwise the touch controls are snappy and will carry their weight on your flight to victory, depending on how you choose to play.

The game offers three modes, each of which should pose a hefty challenge to even the most accomplished shoot ’em up-er. Conquest starts you at level one and challenges you to survive up to 80 waves of ships big and small. Every second you survive increases your score multiplier; die, and those impressive numbers you racked up reset to zero. Hardcore mode strips away your life bar and gives you only a single hit point to go on, and Survival throws massive waves of enemies at you in wild displays that should please fans of tough-as-nails shmups like Dodonpachi Resurrection.

As a shmup fan, I enjoyed Survival and Hardcore modes the most, but Conquest presents a rounded mode suited for players of all skill levels. The mode increases the challenge at a slow burn, giving new players time to find their space legs. At the same time, old hands will appreciate the challenge of keeping scores and multipliers intact during the more grueling stages that come up later on. Giving players unlimited continues might seem a strike against challenge, but it actually adds a layer of difficulty: do you continue, knowing that pressing on means losing your score and power-ups? Or do you go all the way back to level 1 and give ‘er another go?

Three modes, touch controls that hop to at the slightest touch, and retro graphics. Doesn’t sound like much, does it? Don’t be fooled by appearances, Plasma-Sky is a solid addition to the ever-expanding galaxy of shmups available on the App Store.