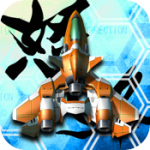 We’ve been following Dodonpachi Resurrection [$4.99] for a while now, from its first announcement, to the first gameplay trailer, and even the pricing and release date.  And after all this anticipation, developer Cave‘s follow up release to the excellent Espgaluda II [$8.99/Lite] actually lives up to the hype. In fact, I like it even more than Espgaluda II, though I’m not necessarily saying one is better than the other. They’re very different beasts, and really it’s worth owning both if you like top-down shooters. But Dodonpachi Resurrection feels like a more well rounded experience, and caters really well to both casual shooter fans and the most hardcore of them all. There’s near endless replayability due to an ingenious scoring system, and Dodonpachi Resurrection deserves a spot on every shmup fan’s home screen.

Visually, Dodonpachi is a very striking game. There is no fancy Retina Display support, as this is originally an arcade game running at an entirely different resolution, and it would be unrealistic for Cave to redraw all of the artwork to suit the iPhone 4. That said, the game still looks damn good. There are three different screen sizes to choose in the options. Small has a huge border area but makes the graphics look the sharpest. Large fills the iPhone screen with the game and a small border on the bottom, but the sprites and text look slightly blurry. Medium is the default and it’s in-between the other two settings. I fancy the large setting, as I don’t really like borders in my games and the blurriness honestly isn’t that bad. The game is filled with tons of huge explosions, humongous transforming bosses, and dozens of enemies and bullets onscreen at any given time. No matter what screen size you play with, it all ends up looking really impressive. 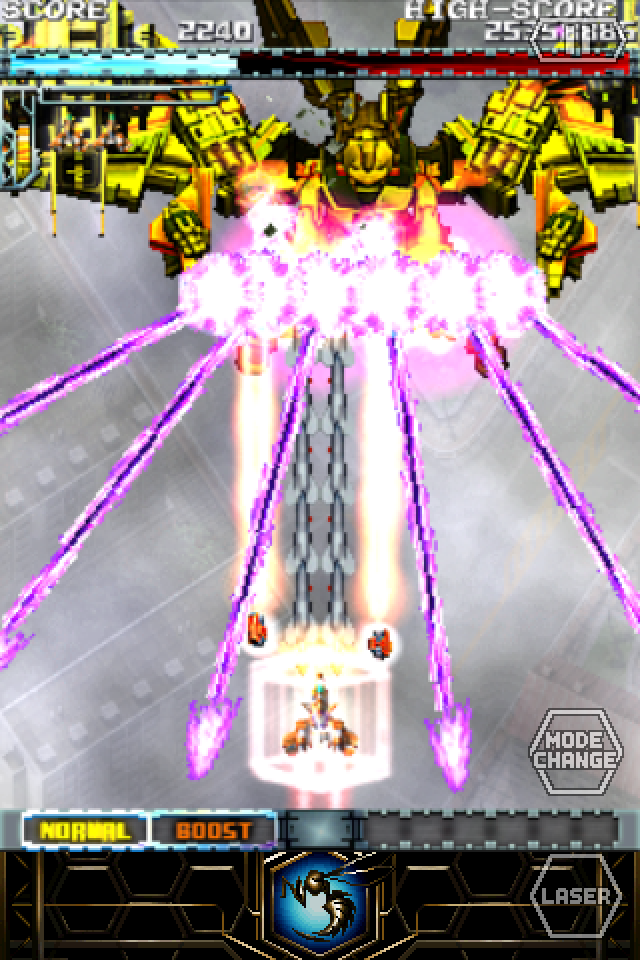 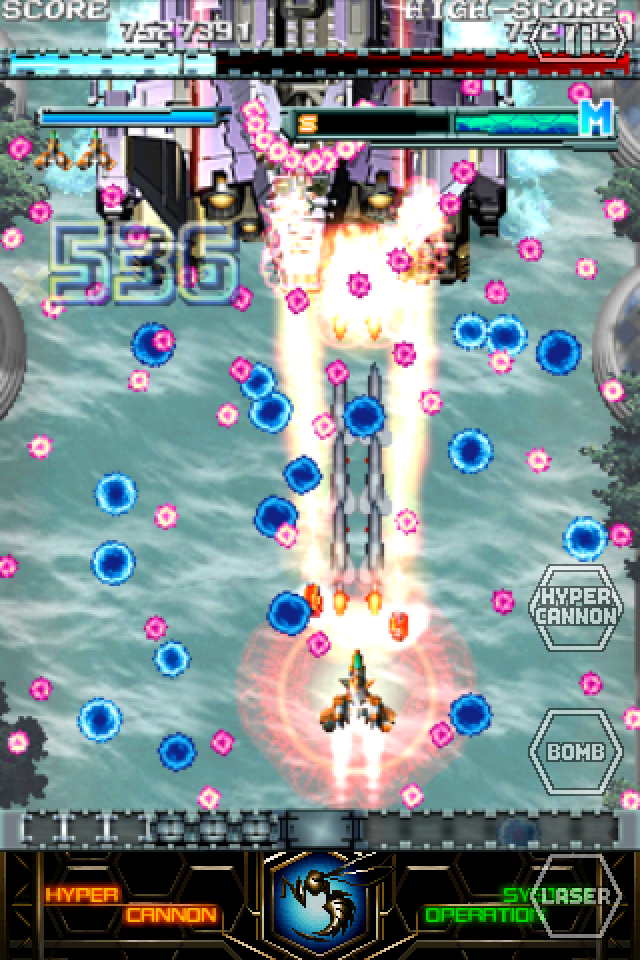 There are two game modes in Dodonpachi, the original arcade mode and a new iPhone mode. Arcade has you choose from three different ships and three offensive styles. These styles can give you unlimited bomb use, a more powerful alternate cannon to switch to, or a combination of the two. They all can help you in different ways, and as such each ship and style combination has its own leaderboard in OpenFeint. The arcade mode is a lot of fun to be sure, but the iPhone mode with its unique scoring system and brand new Hyper Cannon weapon are what really stand out in the game.

In iPhone mode, there is no need to pick styles, just which ship type you want to use. A divided gauge in the upper right of the screen is used for the SM scoring system. A circular area surrounds your ship, and narrowly avoiding these bullets but letting them pass through this area (known as “scraping”) fills the gauge towards the M side while also building up a multiplier in the upper left of the screen. You can continue to do this all the way until your multiplier hits x1000, if you wish. When the M side of the gauge is full, you can hit the Hyper button to start your ship firing wildly, and control the direction of fire by touching the ship and turning it. If you touch the ship and spin it in circles during this time, you build up your Hyper Cannon which unleashes an enormous beam of destruction that obliterates everything on the screen. 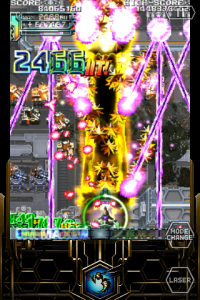 Killing enemies in rapid succession is what fills up the S side of the gauge, and once it’s completely full you will gain whatever your multiplier is at for every enemy you destroy. Essentially, you use this SM gauge in a yin-yang like harmony of avoidance and utter destruction in order to achieve incredibly high scores. It’s really brilliantly designed, and it may sound complicated on paper but it’s pretty easy to grasp onto after playing for a bit. Admittedly, I’m not a hardcore bullet hell shooter guy. I love me some shmup action, but more the typical brand of them, and I’ve always been apprehensive of the bullet hell type because they just seemed so difficult. Not so with Dodonpachi, and I really understand now how different a bullet hell shooter is and the different type of gameplay it brings to shmups.

And this brings me to what I really appreciate about Dodonpachi Resurrection, you don’t have to play it any particular way. Yes, you can endlessly scrape bullets and build huge multipliers, then strategically destroy many enemies in search of massive scores and coveted leaderboard spots. Or you can play it much like a normal shooter, using the bombs and special weapons to destroy the many enemies and bosses in spectacular fashion as you progress through the levels to the end. Heck, I beat the game twice before I even fully understood the scoring system, and had a total blast doing it. This is one of the first games of this kind where I’ve felt like any type of gamer can get a lot out of the experience.

There’s a lot more to Dodonpachi too, like the absolute spot-on relative control system, the excellent brand new music for the iPhone mode, many OpenFeint achievements to unlock, multiple options and difficulty levels, hidden modes, and more. But the bottom line is that if you’re a fan of shooters in any way, you’ll want to pick up Dodonpachi Resurrection. There’s not currently a lite of the game (there’s one on the way), but the introductory price of $4.99 will be going for the next few days before jumping to the regular price of $8.99. Also worth noting is that you’ll need a 3rd generation device or higher, or an iPad, to run the game due to the insane amount of sprites it pushes at any given time. A veritable love-fest is going on with players in our forums who are enjoying the game as much as I am, and as far as shooters go on the iPhone it doesn’t get much better than Dodonpachi Resurrection.