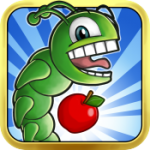 I used to play outside. Then I turned seven and discovered computers and video games. (Nope, no arrow to the knee.) But I can’t give the siren’s song of electronics all the credit for luring me to the air-conditioned indoors. Like karma, Mother Nature’s a… Well, she’s a nasty one. There are all sorts of creepy-crawlies lurking in her leaves, her trees, her grass. Better slouched in front of the computer than out under the sun, that’s what I say, and nobody knows that better than Little Chomp of Little Chomp ($1.99) fame.

Half climber, half puzzle game, Little Chomp asks you kindly to guide a caterpillar from the bottom to the top of trees infested with vengeful critters. Moving Chomp is simple. Just pull back on him, line him up where you want to go, and release to catapult him from leaf to leaf. It’s much like aiming birds in Angry Birds, except physics aren’t as important here. No matter how far back you stretch lil’ Chomp, he’ll slingshot off exactly where you pointed him. 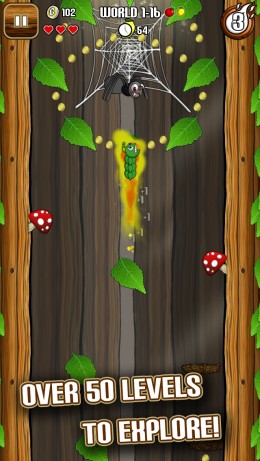 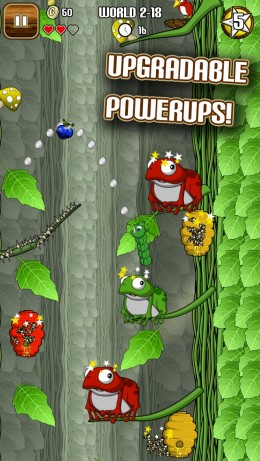 And that’s a good thing, because Little Chomp demands that you zip along right quick to duck and dodge the enemies that populate each leafy level. Bees drift toward you as soon as you land on a leaf near their hive, birds torpedo in your direction when you draw near their nests, some bugs won’t hurt you but will stop you in your tracks as cleanly as if you’d run into a brick wall, and still other critters pose different threats. You’ll need to quickly pick a path between environmental objects such as vines, leaves, and mushrooms that function like trampolines, and move ol’ Chomper along as swiftly as you can.

As you move from the bottom of each level to its sunny canopy, Little Chomp‘s levels present optional challenges for you to complete. You can collect every last coin and fruit, which you use to buy power-ups and feed to your friends so they can become butterflies; race to the top of the stage to finish in under a certain time; complete the level without taking damage or alerting certain enemies to your presents; and buy colored keys to unlock secret passages. There’s always something new to do, and coins came in at a steady dribble that never once made me feel like I’d be better off heading to the IAP store and buying coins rather than earning them.

Completing any challenge will test your reflexes, such as hunting down coins and fruit placed off the beaten path while enemies come darting in at you. All challenges are optional, but finishing every challenge on a level allows you to farm its small amount of fruit as often as you like, and your pals give you coins in exchange for helping them evolve into butterflies. The controls are responsive, allowing you to move effortlessly and concentrate on completing challenges instead of fumbling at your screen. Even better, you don’t have to finish every challenge in one run. I focused on picking up coins and fruit my first time through a level, and then returned later to pick off remaining challenges.

Little Chomp came out of nowhere and charmed me with its smooth controls, variety of fun goals to check off, and absolutely vibrant graphics and crisp audio. At only a buck, you don’t want to pass this one up.