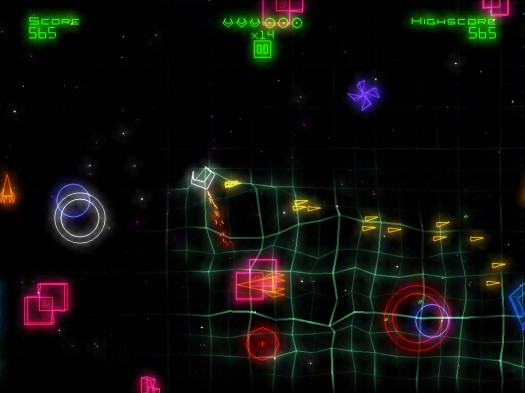 That said, no one should be surprised to hear how excited I was to see Activision release Geometry Wars: Touch [App Store] — out of nowhere — for the iPad.

Those familiar with Geometry Wars: Retro Evolved 2, a downloadable XBLA release, should have a pretty good idea of what Geometry Wars: Touch brings to the table. If you’ve somehow missed it all this time, the game is a retro-styled multi-directional shooter with over the top glowing particle effects. The game has won rave reviews and been cloned numerous times on many platforms. The iPad version features all six play types of the XBLA release, with a seventh (“Titans") added in for good measure.

As compared to the XBLA version of Geometry Wars: Retro Evolved 2, the iPhone release is basically the same game, but with slightly toned down visual effects, no multiplayer, and dual virtual analog stick controls. An integrated online leaderboard keeps things competitive. 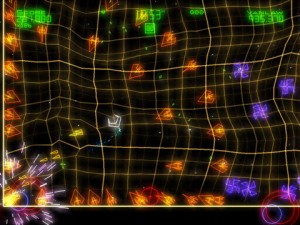 Now, this is the first iPad game that I’ve spent any time with, and I quickly became aware that gaming on the iPad is definitely a different experience than gaming on any desktop, laptop, or mobile device out there. Holding the iPad in front of me with both hands, looking at the action on its sizable screen really was a new and immersive experience.

Sadly, though, it’s not all for the better.

Geometry Wars: Touch, as mentioned earlier, is a dual virtual stick shooter. There are plenty of these types of games out there for the iPhone and iPod touch, and they play well enough. But, on the iPad, things are a little different.

In an earlier article, both Arnold and Eli noted an initial unease with the dual stick controls in this and other games on the iPad. After spending time with this title, I felt similarly and attributed it to the iPad’s larger edge border. Because of the extra “dead area" around the screen, I frequently found myself dragging my thumbs out of the active multitouch area and losing control of the game. At first this happened quite a bit, but as I got a few hours into the game and learned to force myself to put my thumbs “deeper" into the screen, the issue lessened — but it was still occasionally there.

That said, I don’t think the issue is a specific implementation problem on the part of the Geometry Wars: Touch developers; I believe it is likely just a side effect of the iPad design. And I sincerely hope that more time spent with such games on the iPad can result in a learned proficiency that makes this a non-issue.

Those control concerns aside, Geometry Wars: Touch is, like earlier members of the series, an excellent arcade shooter. The game has been endlessly cloned on the iPhone and iPod touch platform (and most other platforms), so iPad gamers are definitely lucky to have an authentic Geometry Wars title in the App Store. And, for jealous iPhone and iPod Touch owners, I can’t imagine why Activision wouldn’t also port the title the rest of the iPhone platform devices sooner or later.