In the world of iOS games, we’re often impressed with what our mobile hardware is capable of, and crave those big gaming experiences that are comparable to those found on consoles and desktops but with the ability to be played on the go. It’s a neat world we live in where stuff like that is possible.

The flip side of that coin is that mobile devices are also a perfect place for the not-so-robust title; something quick and accessible that we can distract ourselves with for those few moments throughout the day when we’d otherwise just be killing time.

With that, sometimes a game does basically just one thing that’s clever or unique, but won’t necessarily be a game you spend months or years with. But for their intended purpose – a quick distraction – these games do what they set out to do really well, and while an in-depth review typically isn’t warranted for such a game it’s worth quickly highlighting their unique aspects for those people who are constantly looking for new and interesting gaming fixes while on the go. 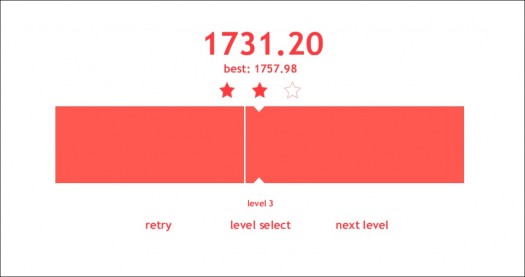 Over the weekend a game caught my eye that fits this bill perfectly. It’s called 1800 (Free), and the idea is simple enough that literally anybody can give it a shot. Picture those meters used in golf games over the years, you know the ones I’m talking about – a cursor travels back and forth and you’re tasked with stopping it at just the right spot on the meter which correlates to the power and accuracy of your shot. It’s a classic game mechanic used in lots of instances, and the basic idea is what drives 1800.

A cursor travels back and forth, and stopping it in the dead center awards a perfect score of 1800. You’re graded on a 3-star level based on how accurately you can stop the cursor in the center and get 1800. That’s the game at its core, at least, but as you progress through the 20+ levels more complicated and challenging variations of the idea come into play.

For example, a line will run across the meter along with your cursor, both traveling in different lengths at different speeds. You’ll need to time it just right to stop the cursor and the line right in the middle of the meter at the same time. Levels increase in difficulty by adding more line variations and even an additional cursor to keep track of.

1800 is an incredibly difficult game. Just getting the 2-stars in a level that are needed to progress to the next is really hard, but if you’re going for 3-stars on every level then it’s downright brutal. It’s extremely quick and easy to retry levels though, so it’s actually a pretty welcome challenge. There’s an additional Timed mode to unlock too, which gives you 60 seconds to land as many direct hits as possible. Game Center leaderboards are included for both the regular and Timed mode, along with just a handful of achievements.

It might not be the most robust title out there, but 1800 is a quick bit of fun when you feel like challenging your motor skills, and if you really click with it then chasing the elusive 3-stars for every level will keep you busy for a good long time.