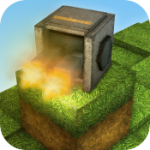 Unsurprisingly, like anything with even a hint of Minecraft mixed in, Foursaken Media’s Block Fortress ($1.99) is absolutely ripping up the iTunes charts. Brad and I bumbled around a bit in game for a TA Plays, there’s a stupid-huge thread in our forums, and we’ve even had the developers share some tips. Well, TouchArcade reader and apparent Block Fortress pro-level player who goes by “Giggles Grimm" sent us some of his tips, and we figured we had to share them with the rest of our community. Keep in mind, these tips are a little more advanced with some assumed knowledge that you as a player have spent some time with the game. Trust me, it’ll all make sense once you do.

1. Start your base as high as possible near mineshafts. I generally situate it right on the edge of a cliff, or better yet a cliff on water. This tends to make defending one or two sides of your base much easier.

2. Your main goal in the first 4 rounds is to race to establish:

This will help set you up with a good income of minerals early, and let you expand to installing more mining drills while balancing with a well-defended base.

I typically get to round five with three or four plasma blocks on mineshafts or on the sides of my base, plus at least one mortar and one laser on the roof.

3. Here’s two equipment options that are more important than guns: Buy and equip a spotter and craft an ID mod on it, as soon as possible! This is very useful for figuring out where those damn Shadow Goblocks are and other boss Goblocks. Buy a stimpack and upgrade it for the speed mod. This will have you running much faster all over your map, which is a huge advantage after round ten. 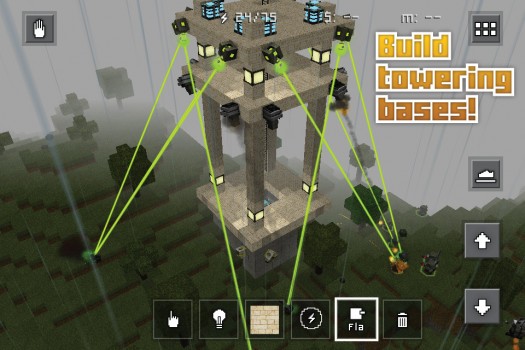 4. Craft, craft, craft. Play multiple maps simultaneously to get you green, blue, and white minerals. As far as weapons are concerned, upgrade plasma, laser and mortar turrets to detector mode as soon as you can so that they will take down enemies at night without the complicated fuss of lights. If you do have to use lights, use tracker lights on top of your base, as the others are pretty useless. Crafting a tactical light onto your firearm of choice (for me, shotgun, plasma, cry gun, and bazooka) can also be helpful.

5. Build on top of your base. I typically put five powerblocks on the base roof in a cross, then build a floor over that on four corner posts (just one post can be taken out, leading to roof collapse or turrets falling off), and then lasers and mortars on top. The reason for putting your most valuable defensive assets on top of your base is that most Goblocks will go after your base first, which is very durable and alerts you when it is being degraded. Then totally encase your base in a mesh / techmetal pyramid.

6. Mesh, mesh, mesh. At least in the early stages of the game, you can afford mesh building blocks a lot more than concrete or metal, because it uses money rather than minerals. Use mesh everywhere. Later, you can craft tech metal with the salvage and HP options, and then you’ll have highly durable blocks that you can move around between rounds at will without financial penalty. 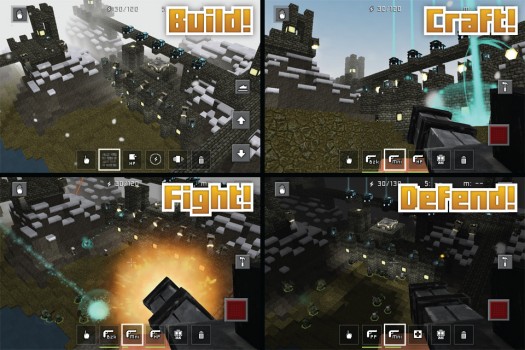 7. Turtle your farm and your mineshafts. That is, build mesh pyramids to completely cover over them with a plasma gun or two on top. For my farm (only plant on bedrock) I put wooden or concrete blocks on top so that there is no financial penalty for accessing my food when i need to restore HP. Erase the land blocks down to bedrock around each mineshaft and the farm so you don’t have to constantly monitor whether the Goblocks are getting in underground while your mortars degrade the landscape. Keep your powerblocks at the same level as your mineshaft so that you can see Goblocks trying to get in to attack them (if they’re attacking down low it’s much harder). Powerblocks sometimes fall down when the earth blocks they are on become degraded, so build them up on mesh blocks even with the mining block.

8. Lasers are the best defensive tool in the game, in my opinion, because they take down enemies of all types from far away (For example, I’ve never had to worry about giants, my lasers take them down before they get to any mine-pyramids.), allowing you to focus after round ten on finding the shadows that the turrets won’t target or other bosses. This is why you need your base on a high point. By round fifteen I usually have ten lasers, at least, on top of my base, arranged on diagonal booms (two layers thick) to give them maximum firepower dispersion. Craft to upgrade the heck out of lasers- damage, detector, mostly. The only downside to this strategy is having jumpack Goblocks get on your roof and destroy them, or having bazooka or laser Goblocks pick them off. So intercept these types early and monitor your rooftop closely.

9. Don’t diversify turrets. By sticking with plasma (close support), mortars (medium support), and lasers (long-range support) only (well that’s the three turret types that I prefer, anyway), you can craft upgrades to them and be sure your upgrades improve gameplay on all your maps. 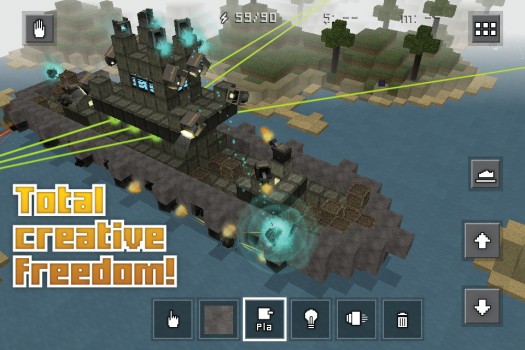 10. Save often! I save after a successful round, and then again after investing my newly-earned money and minerals. This way, if my investments (new turrets, mines, etc.) prove unsound, I can go back to the save at the end of the last round and invest differently.

BONUS TIP: This is more a theory than proven practice at the moment, but I think a well-upgraded bazooka is the best way to combat shadows from a high point. They stick together in groups, so you can take them down with a few bazooka shots from the roof of your base and then close in to finish with shotgun. Might also be a good way to deal with other Goblock headaches like leaders and engineers at a great distance, if you craft armor-piercing upgrades to the bazooka.

The more I play at higher levels, the more it seems that sticking close to your base is extremely important – otherwise one group of Goblocks attract you to the east, and while you’re shotgunning them down, two more groups move in on your base from the west and then you’re screwed. So having weapons that will take enemies down at range, without pinpoint accuracy, becomes more important – hence my investigation into playing from the base roof with an upgraded bazooka as much as possible.

Did you get all that? Thanks again to Giggles Grimm for his dedication to the game, and for sending us this extensive list of tips. It’s really sort of amazing that Block Fortress has this level of depth that actually makes it viable to have these kinds of discussions on the vastly varied strategies of the game. This is what works for Mr. Grimm here, but, you could be equally successful doing something else elaborate defending your base from the Goblocks.

Agree with his strategies? Disagree? Have different ideas entirely? Share your tips in the comments here.