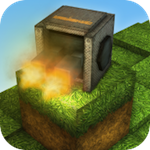 Block Fortress ($1.99) is a blast. It’s a sandbox tower defense game that plays like Minecraft, except with guns. Across the game’s modes, you’re tasked with plopping down a base and defending it against waves of armed and armored goblins. You can erect walls, dig moats, and build turrets in order to do this. You can also take the fight to the goblins with your own weapons, if you’re feeling froggy. For the most part, a good chunk of the experience revolves around resource hoarding — you need to gather the cash that goblins drop and use it to effectively to defend and fix your base as the horde morphs from sword-carrying idiots to aggressive gun or bomb-toting maniacs. The push and pull feels frantic, but fun and the action is surprisingly solid.

Oh, and like any good sandbox game nowadays, there’s also a crazy crafting system. As you play, you can plop down mines over precious resources. As you gather these, you can mod your weapons and make them stronger.

If you’re thinking that there’s a lot to this, you’re right — there’s a ton of stuff going on with this one. But, it’s definitely worth a look. Check it out: